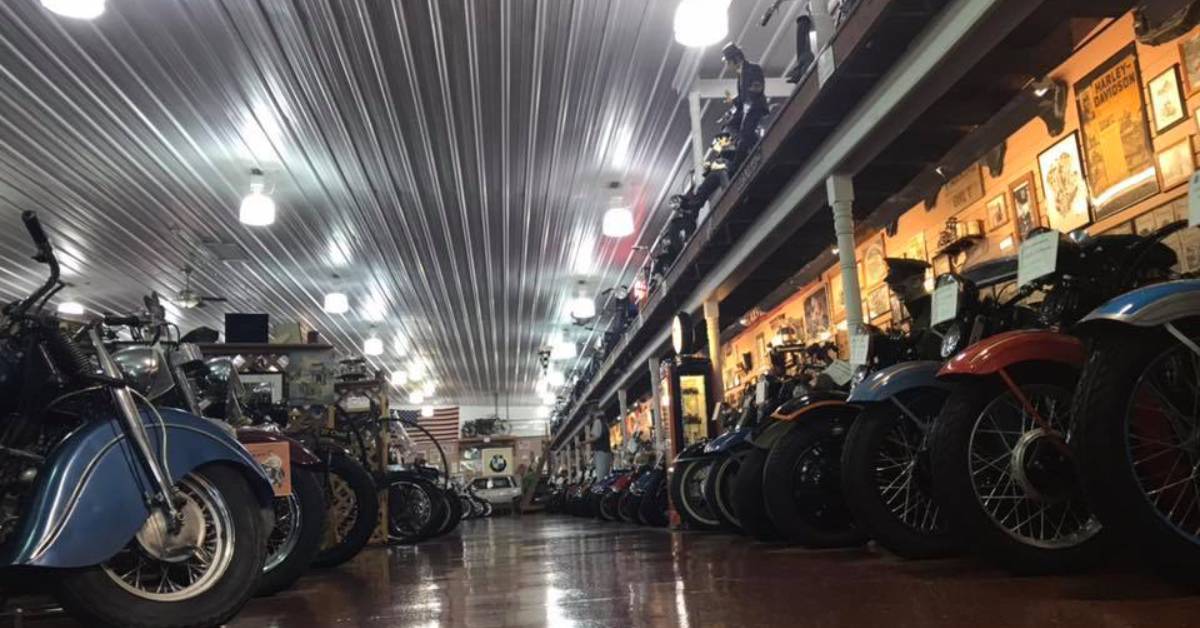 Justin Kersting still has a vivid memory of trailing after his grandparents, Jim and Nella Kersting, as they furnished their retirement project, the World of Motorcycles Museum. The pair had just turned over their successful cycle dealership, Kersting’s Cycle Center, to their kids Sandy, Randy, and Jason. Used to hard work and business, they weren’t entirely sure how to manage all of the free time that fell in their hands.

“They looked at each other and kind of asked, ‘What now?’, and my grandma said, ‘Why don’t we start a garden or something?’, and my grandpa said, ‘Nah, honey, let’s start a museum,’” Kersting laughed.

A far-fetched sounding goal, but with Jim’s extensive knowledge of all things cycle-related and growing collection of rare motorcycles, it made sense. Besides, the two had built Kersting’s Cycle Center from the ground up in the ‘60s, so they knew how to embark on successful ventures. In those days of his childhood in the early 2000s, Kersting and his family didn’t realize just how successful the museum would become.

The World of Motorcycles Museum now contains more than 219 bikes, 24 cars, 20 bicycles, two tractors, and wall-to-wall memorabilia. And it’s still growing. Resting between the small towns of North Judson and Winamac, the museum attracts a steady flow of visitors from out of town and across the world.

“Just today, some German tourists were here, and a few weeks ago a Polish family stopped in,” Kersting said.

Kersting attributed the draw of the museum to a unique combination of variety and charm. A small town in Indiana is rarely on international travelers’ radars, but when there’s such a wide array of collectibles, that niche interest delivers. The machines on display span nearly nine decades of history and come from dozens of different countries—France, Italy, Germany, the Czech Republic, Japan, and more. Many of the items on display have all but disappeared from existence outside of the museum.

The charm, Kersting said, comes from the memorabilia sprinkled liberally throughout the museum. Apparel, toys, gear heads and parts, and other high-value collectible items are nestled beside the antique machinery. Framed photos of the Kersting family through the generations complete the ambience.

“The main thing people tell me is that you can walk through this museum so many times and still see something new,” Kersting said. “No other museum of this nature has this mass amount of memorabilia. I’ve been to the largest motorcycle museum in the country, and I can tell you it does not have as much charm as ours.”

While Kersting maintains an earned bias in this opinion, most people who visit the World of Motorcycles Museum agree with him. To see Jim’s very first item in the collection, a 1931 Indian 4 cylinder he purchased at an auction in 1967 and which the Kersting family went to great lengths to ensure stayed in Jim’s possession during financial shifts, is to see a piece of the most avid enthusiast’s heart. The 1916 Harley-Davidson® model J on display is now a highly coveted relic of Harley-Davidson® history, one of many Jim spent careful time selecting. And, of course, the photos of the Kersting family lining the walls are also pieces of history, ones Kersting helped his grandmother Nella hang.

After the museum had its grand opening in March of 2003, Jim and Nella Kersting got into a motorcycle accident just a handful of months later. That July, Nella passed away. To celebrate her memory, and every bit of labored love she bestowed on the museum and dealership, the Kersting family commissioned a plaque in her honor. Visitors can experience firsthand the personal touch and devotion that went into the collection, a charm not found in many other high-caliber museums.

Even now, Jim Kersting visits his museum nearly every day. He’s still adding to his ever-growing collection, often with the help of his grandson.

Kersting recalled an email he received recently from a German traveler who visited the museum some years back. Kersting and his grandpa had struck up a conversation with the enthusiast, and they still keep in semi-regular contact.

“He had just visited a [motorcycle] museum in Germany, and he said in his email, ‘Man, I just can’t stop thinking about your grandpa’s museum, though.’”

And there’s the draw.

“My grandpa always says, ‘It’s worth nothing if you can’t share it with people,’” Kersting said. “And that’s what he loves doing. He can tell you anything about the cycles and cars in the museum. He loves to share that.”

The World of Motorcycles Museum is typically open Tuesday - Friday, 9:00 a.m. - 5:00 p.m. Eastern/Standard time, and 9:00 a.m. - 4:00 p.m. on Saturdays. Admission is $5 per person. To learn more about this hidden gem and Kersting’s Cycle Center, visit https://www.kerstingscycle.com/. Be sure to visit the World of Motorcycles Museum’s Facebook page for updates and more photos.