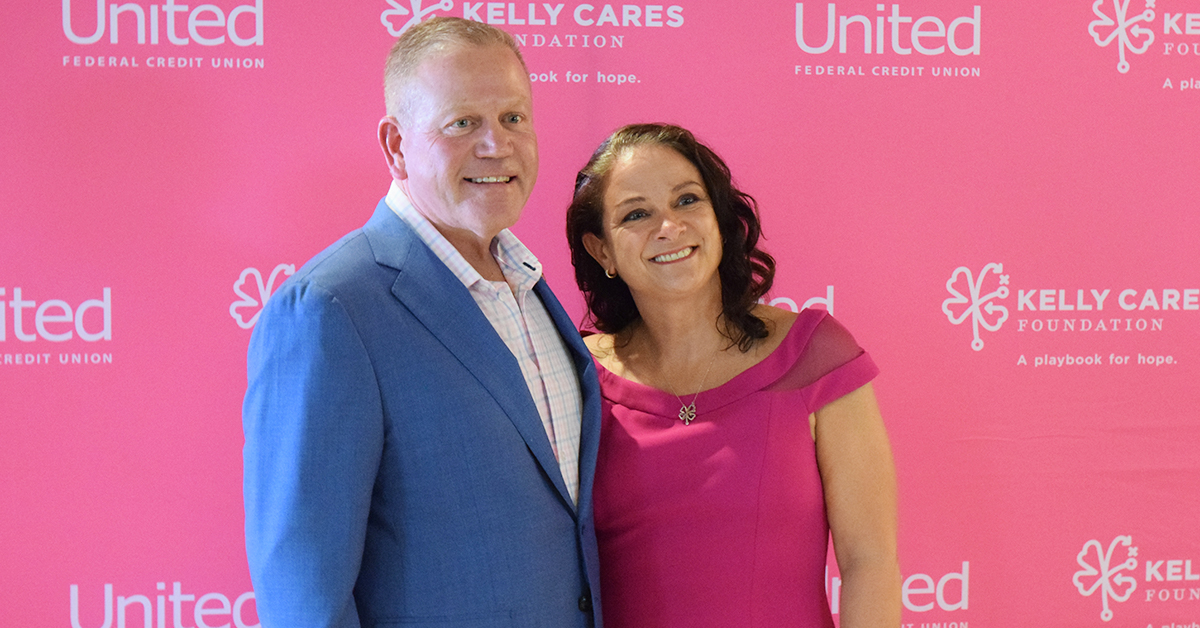 October may be the month for breast cancer awareness, but for Brian and Paqui Kelly breast cancer awareness is year-round. the Kelly Cares Foundation celebrated the Power of Pink on Wednesday evening by honoring playmaker of the year, Dr. Sharon Stack. Stack is the Director of Harper Cancer Research Institute and Professor of Chemistry and Biochemistry at the University of Notre Dame and was nominated for playmaker of the year because of her impact on the greater South Bend community.

All proceeds of the night from ticket sales, the silent auction, and raffle tickets go straight to patient advocacy and cancer research. Attendees were served with a delicious Navarre Catering line up of hors d’oeuvres, Gigi’s Cupcakes, a product tasting by Stella Artois, and an open cocktail bar. The Power of Pink Cocktail Party is part of the annual Paqui’s Playbook October event series which brings the community together to raise awareness for breast cancer and promote healthy living initiatives.

Brian and Paqui Kelly were proud to announce Stack as this year’s recipient of the Playmaker of the Year award. As the Director of the Harper Cancer Research Institute at the University of Notre Dame, she along with Dr. Laurie Littlepage and her team have discovered a breakthrough by identifying two proteins that cause breast cancer cells to metastasize to the bone.

“[Dr. Stack] has really been spending most of her adult life trying to fight cancer in some shape or form,” Paqui said. “Stack and her team are really committed to making an impact for cancer research.”

“I know a little bit about playmakers because I’m looking for them each and every day,” Coach Kelly said. “So having the playmaker award for us is really about leadership and you have to have a great drive because any kind of cause like this requires you to have some setbacks so you have to be resilient and it’s for someone in this area.”

The Associate Director of Harper Institute, Dr. Andy Bullock, accepted the playmaker award on behalf of Stack. Bullock gave an inspiring speech stating that all research starts right here, with you and me.

“The vision and leadership that [Brian and Paqui Kelly] have shown on how our community fights cancer has been instrumental and very much worthy of our appreciation, but our thanks goes beyond that,” Bullock said. “There’s one other person I feel is often overlooked, someone who needs to know how important they are in the fight against cancer, and that’s you.”

Kelly Cares Foundation currently funds three research projects at Harper Cancer Research Institute, which are building a better mammogram, improving chemotherapy, and stopping cancer metastasis. But the most important part is raising awareness for preventative treatment when it comes to cancer.

“It’s really about breast cancer awareness and health initiatives that we’re trying to get people involved and be proactive,” Paqui said. “But most of all it’s about sharing and being a team and being positive influences, we don’t do this by ourselves.”

Kelly Cares foundation is in its eleventh year and has raised 5.4 million dollars for cancer research which has gone to over 200 organizations in the South Bend area alone and to communities in over 20 other states and four other countries.

“It's just a really giving community, we’ve been really blessed to be here, and I think that’s why God put us here,” Paqui said. “It’s made our impact here very positive and productive in terms of being able to raise 5.4 million dollars to give back to communities.”

For more information on Kelly Cares Foundation, go to www.kellycaresfoundation.org.