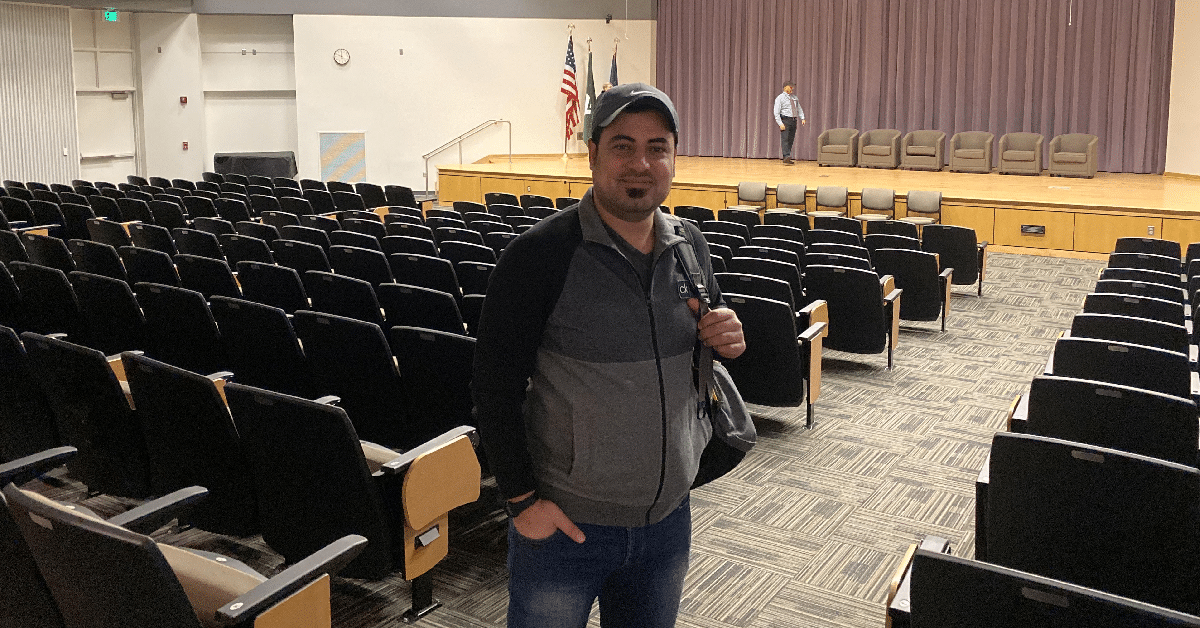 Although he only recently began studying cybersecurity at Ivy Tech, Mina Saad will compete in the National Cyber League Super Bowl in Washington D.C. He earned first place at a recent competition that was held virtually.

“The competition was great. I know it was virtual, but it was amazing. I know during the pandemic it is hard to meet face-to-face,” Saad said. “When I heard my name and knew that I had won with this great team, I honestly did not believe it at all. My friends and Professor Rami [Salahieh] were all texting me during the boot camp and they couldn’t believe it either.”

“He gets to compete on a national level. It’s a big deal,” Salahieh said. “There will be some really important people. Some top-notch companies will be invited. It’s good for (Saad) because it can lead to jobs in the field. That’s the whole premise of this, to get students to find jobs. Another former winner like Mina got a job at a police department as a forensic analyst and an intelligence analyst.”

Ivy Tech students like Saad receive training for jobs that secure our community, state and nation’s computers, networks, and critical infrastructure. Saad quickly took a liking to cybersecurity this past year which led him to compete through the Cyber Security League.

“The field itself is exciting. When I first heard of cyber tech in school and about hacking, I found it very interesting. It’s fun, too,” Saad said.

Saad has attended Ivy Tech for two years but has been pursuing a higher education much longer. Before coming to the United States, Saad received a degree in law from Beni Suef University in Egypt. He had also previously studied at Purdue but decided to switch schools.

“I was an Illinois resident, so they were charging me a lot. I could not continue to afford it, so I stopped after about a year and a half,” Saad said. “I was planning to go back, but then I met Professor Rami. I’m from Egypt and he’s from Syria, but we speak the same language. Our conversation was amazing, so I decided to stay at Ivy Tech instead of going back to Purdue.”

Professor Rami Salahieh made Saad feel welcome at Ivy Tech and was helpful during the transition between schools. The two actually met when Salahieh went to Best Buy in Highland to get a computer. Saad was an employee at the time. They had a conversation about cybersecurity at the store.

“At the end of that conversation, I said, ‘Hey, by the way, I work in cybersecurity.’ I gave him my business card and said, ‘We’ve really got a good program in Valparaiso. Come check it out,’” Salahieh said.

Saad noted that Salahieh is the Cyber Security Program Chair and Advisor and credited him with helping students prepare for National Cyber League competitions.

“The materials we received were amazing. We got four or five books and about four flash drives. There are a lot of virtual machines and a lot of great material labs. I kept practicing, attending the school, and asking questions. Rami is actually the man behind the scenes. He does a great job not just with me, but with every student who needs help in this field. He’s amazing,” Saad said.

Saad said he was grateful for Salahieh being quick to respond to students’ concerns and care about them on a personal level when the pandemic hit.

“When you have a professor who goes to the level of a student to become a friend, it feels good,” Saad said.

Salahieh said Super Bowl is a great opportunity for students like Saad to network in the field of cybersecurity.

Whether Saad competes in a physical or virtual setting, he is excited for the experience and for another chance to use his skills. For more information on the Cyber Security program at Ivy Tech, visit ivytech.edu/cyber-security. There is still time to enroll in Ivy Tech’s fall classes that begin August 24 with options online, virtually, and face-to-face.