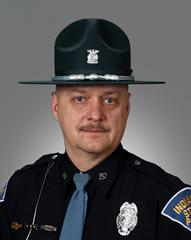 Burkhart is a native of rural La Porte County and graduated from La Porte High School in 1979. In November, 1989, he graduated from the Indiana State Police Recruit Academy and was assigned to the Toll Road Post where he spent seven years working Porter, La Porte and Saint Joseph Counties.

In 2009, Burkhart transferred to the Lowell District where he worked Porter and La Porte Counties. For the past year he has been assisting with vehicle crime duties as needed.

During his career, Burkhart has served as a Field Training Officer, Radar/Vascar and Laser instructor, First Responder instructor at the district and also for the cadets at the ISP Law Enforcement Academy, Drug Recognition Enforcement instructor, and a Standardize Field Sobriety Testing instructor.

Prior to joining the department he was employed as a jail officer at the La Porte County Jail and worked three years as a La Porte City Police Officer. He also has an Associate Degree from SW Michigan College in Applied Science.

Detective Burkhart is the Master of the Lodge for the Free and Accepted Masons Kingsbury Lodge and is a member of Augsburg Lutheran Church in Porter.

He resides with his family in Porter County.