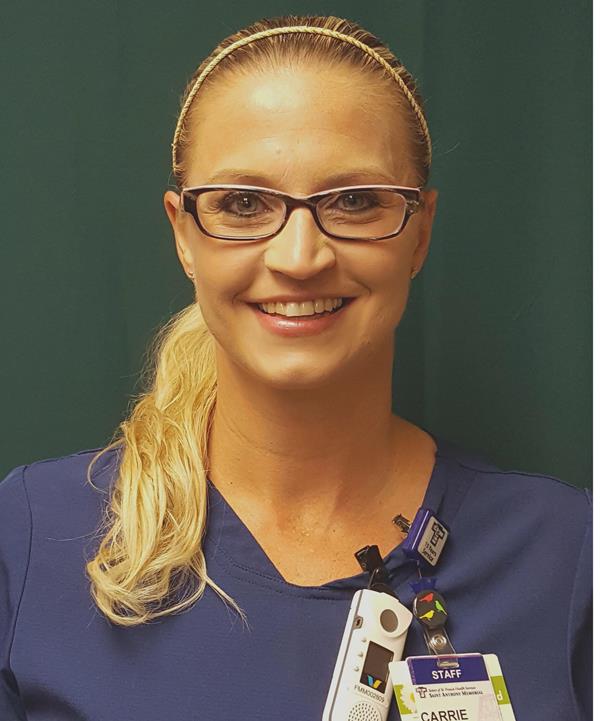 Carrie Crouch, a registered nurse who has been with Franciscan Health Michigan City for 16 years, is the hospital’s July Daisy Award winner.

The Michigan City resident was nominated by a patient’s daughter, who said, “My mother was admitted to the hospital from the ER for stroke-like symptoms, irregular heartbeat, severe dizziness and a case of shingles. She was filled with anxiety and pain. Over the past few years, mom has been hospitalized a number of times. This was her first stay at Franciscan Health Michigan City. Now that she is home recuperating from receiving a pacemaker, mom cannot stop telling family and friends about the wonderful care she received. Carrie’s name is always the first she speaks about.”

The daughter added, “Carrie’s smile and caring manner were the first thing you noticed when she entered mom’s room. She cared for her needs and requests quickly and efficiently. She was never in a rush and listened to mom’s concerns. She made my mom feel special and cared for. She calmed my mom’s anxiety and went the extra mile to ensure she had the best care possible.”

As part of her award, Crouch received a DAISY award pin, The Healer’s Touch sculpture, a DAISY Award certificate, a gift bag from the DAISY Foundation (that included a special rate on certification or recertification from the American Nurses Credentialing Center, and discounted tuition from Chamberlain College of Nursing), and a box of Cinnabon cinnamon rolls to share with her coworkers. She will also have her photo posted on the “DAISY Wall” near the main floor lobby, along with the other winners as they are named each month.

The DAISY Award for Extraordinary Nurses is an internationally recognized honor that was established in 1999 via the DAISY Foundation by members of the family of Patrick Barnes. DAISY is an acronym for Diseases Attacking the Immune System.

Patrick Barnes was a 33-year-old husband and father of an infant daughter who died eight weeks after being diagnosed with the autoimmune disease idiopathic thrombocytopenia. The award was established to honor what his family perceived to be extraordinary kindness and compassion by the nurses caring for him during his illness.

Cinnabons are given because when Patrick was too ill to have an appetite, at one point he was able to eat a Cinnabon his father had brought, and Patrick requested that Cinnabons be brought in the next day for not just him, but for the nurses as a thank you for their care.

More information about the award can be found at: https://www.daisyfoundation.org/