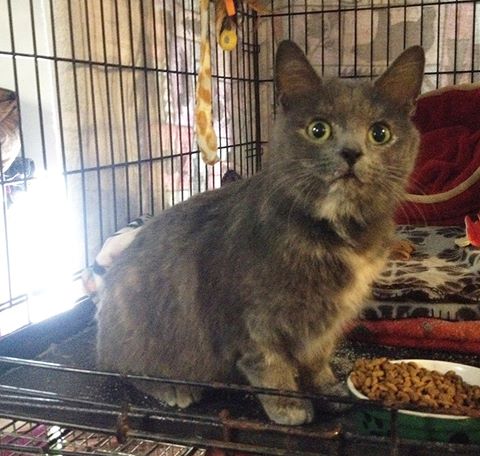 Can you help Honey Bee, a four year old female dilute tortie, find a home to call her own? Honey Bee is a sweet affectionate cat who tested positive for Feline Leukemia but shows no signs of being ill.

Honey Bee was found outside a local automobile dealership during the coldest part of last winter huddled against an apartment building trying to take refuge from the very cold and snowy weather. Her plight was told to an Independent Cat Society volunteer who thought Honey Bee was a feral cat and suggested that a cardboard box and some straw to make a makeshift shelter for the kitty be set up. Truly feral cats are survivors and with shelter can do quite well in bad weather. In fact, shelter is more important to them than food is. It was later determined that Honey Bee was not feral and therefore she might not know how to fend for herself in the terrible weather. A non-feral cat does not have the survivor instinct and therefore does not know how to protect itself from the cold weather and could very easily freeze or starve to death.

The thought was that Honey Bee may have been displaced from a home somewhere, but no one claimed this sweet kitty. Because it was determined that Honey Bee was not feral it became urgent that they get her off the streets and to someplace warm and safe.

The Independent Cat Society’s TNR squad was called in to try and catch Honey Bee and get her to someplace warm and safe. But because she was spooked due to the wind and cold and she did not recognize the person trying to catch her, she ran away. The TNR volunteer told the woman, who had been feeding Honey Bee, to try to get her into her house and into a carrier because Honey Bee had begun to trust her and they would come back and get her.

The very next day the woman called the ICS TNR Squad and advised that she had been able to lure Honey Bee into her house and had her in a carrier, but she could not keep her there long because she had a young puppy they had just recently gotten and it was very playful and rambunctious and would frighten the already terrified kitty.

So the ICS TNR volunteer returned to get Honey Bee and took her to another ICS volunteer’s heated pole barn. Once inside this warm building Honey Bee began almost immediately to make kitty biscuits for over an hour. You could tell Honey Bee knew she was safe and was happy to be in a warm place because she kept rolling around on a blanket and rubbing on it and purring up a storm. She truly must have thought she was in heaven.

Just why someone dumped Honey Bee was never determined but it was felt that it was not because she was Felv because no one would have her tested only to take her back home and throw her outside in the cold. But it does seem likely that she was someone’s pet because she is just so affectionate, friendly and plays like a kitten.

Honey Bee would make someone a wonderful pet. She loves to be held in your arms and cuddled like a baby. She would do best as the only cat in your home but could also be in a home with other Feline Leukemia cats. Won’t you please consider opening your heart and home to this wonderful kitty. Don’t want to make the commitment to adopt her, would you consider being her permanent foster home? If you can help this wonderful girl or want more information about Honey Bee and/or Feline Leukemia, please contact the Independent Cat Society TNR Squad at icstnr@comcast.net or call the Independent Cat Society, at 219-785-4936 and leave a message with your contact information. Won’t you rescue this sweetie from a life of living in a pet run and give her the home and love she truly deserves?