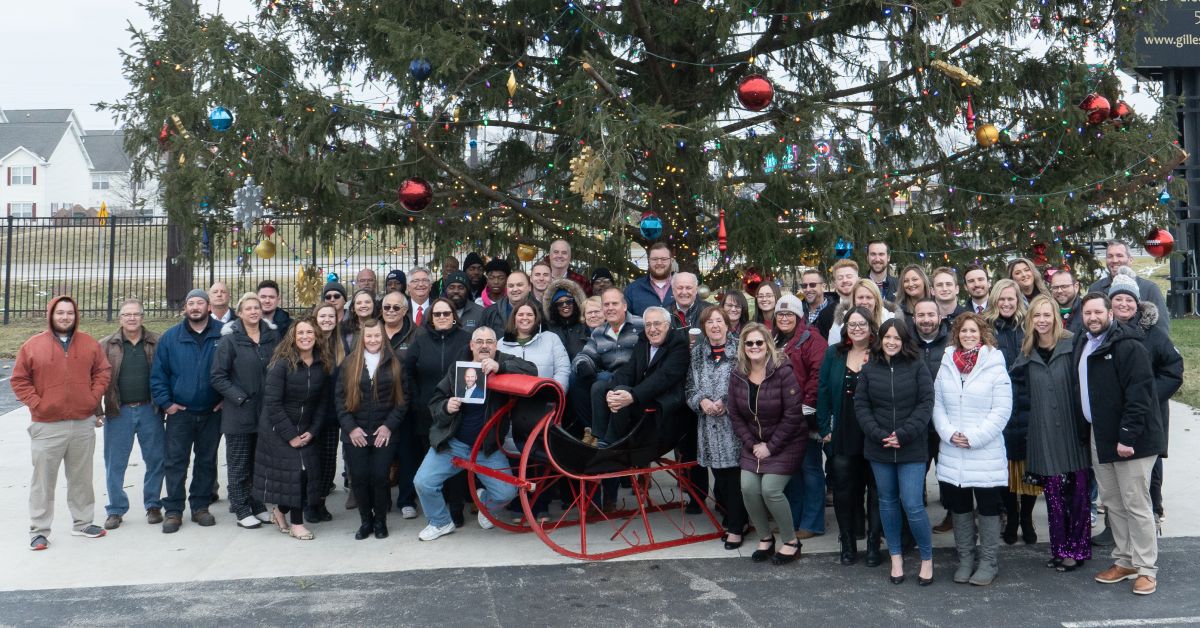 There are holiday parties, and then there are Holladay parties.

The nearly 70-foot tall Norway spruce is meant to spread holiday cheer to guests and residents entering South Bend from the Indiana Toll Road, but also stands as a metaphorical reminder of the impact the Holladay team has had on both the business and community landscape throughout the company’s 70-year history.

In recent years, Holladay has worked to create a better blend between the property, construction, and hospitality sectors of the company. The new unified front has allowed employees and partners from every area to come together to make big things happen in the Region.

“We really wanted to create one company focused on one mission with a shared set of core values, and it's really awesome to see what's taking place here. I can only imagine what's going to happen as it continues,” said President and CEO Tim Healy.

Since its inception, Holladay has put special emphasis on investing time into volunteerism and community work. This year, Holladay employees dedicated over 2,000 hours of their time to volunteer projects and donated more than $130,000 to charitable organizations.

“We help the community in lots of different ways. We do two service weeks a year, and we have donated lots of money to local charities. We've had associates volunteer over 1,300 hours of their time to volunteer work. To me, it's the giving back that’s the most significant,” Senior Director of Marketing Jillian Koeneman said.

The annual year-end celebration is a reminder for all in attendance that hard work pays off. Whether through service or fiscal accomplishments, Holladay continues to build proficient employees with an impressive work ethic and a sense of responsibility to the community.

Vice President of Development Paul Phair has been professionally involved with Holladay for 17 years, but Holladay has been a major part of his life since birth. His father, John Phair, now sits as chairman of the company after holding the president and CEO title for many years.

“I grew up with the company. I've known Holladay my entire life. It's always played a special role in my life really from the time I was born, so being a part of something that has integrity and makes a positive impact is just awesome,” said Paul Phair.

John Phair has been an integral part of the Holladay team for 43 years, and he still gets excited about the annual holiday party. For him, it’s a way to show off the many aspects of growth within the company throughout the year.

“I love the year-end celebrations. It's a sense of accomplishment watching us grow. Watching a lot of people become partners and generate responsibility, the growth of employees in whatever sector of the company they're in is what it’s really all about. It’s just watching people succeed in their areas,” said John Phair.

The Holladay team is looking forward to what’s in store for 2023. No matter what challenges may lie ahead, every sector is equipped with the right people and tools to adapt and achieve more than the years before.

“It looks like from an economic standpoint, the climate may be a little challenging next year. We're going to have to be creative in how we approach different projects and issues, but we have a team that's willing to think outside the box. That’s, I think, the most fun way to approach a project. We have an extraordinary group and I'm expecting really good things in 2023 and beyond,” said Paul Phair. “I just can't wait to kind of see the impact that we make, both from a business as well as community standpoint.”

For more information on Holladay Properties and Construction, visit https://www.holladayproperties.com/.