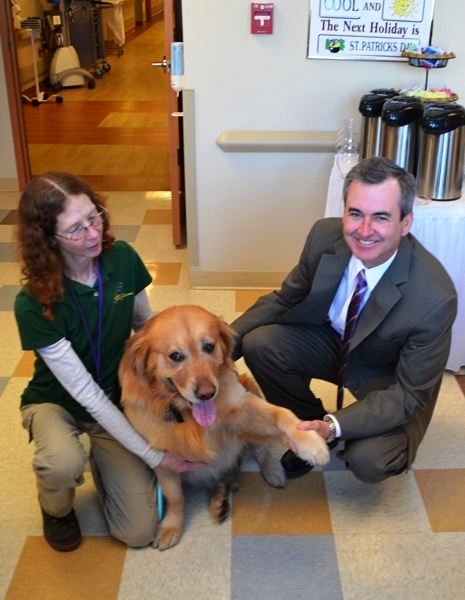 For the last year and a half, he has spent at least two hours each week brightening the spirits of patients, mostly in the therapy and behavioral health units, but throughout the hospital.

On March 12, Andy was honored at Franciscan St. Anthony Health, not only for his cheering-up skills, but for probably saving the life of a neighbor across the street from his owners’ home who had fallen getting out of her car and was lying in a snowbank, unable to get up, on a subzero night recently.

The 118-pound, 5-year-old Golden Retriever, who was outside “to do his business,” scaled a 4-foot fence that surrounds his family’s front yard in Chesterton and went to the woman’s side. He barked until owners Vicki and Barry VanDenburgh were alerted and came to help.

“I went outside to let the dogs in (they have four) and all of a sudden I hear Andy barking – then see his shadow and he’s spinning around and barking, across the street,” Vicki related. “So I went down the driveway to see what was going on. I called out our neighbor’s name, but couldn’t see her until I got around her car. I ran to get my husband and told Andy to go home, but he wouldn’t leave her – he stayed next to her until we were able to get her up.”

The woman, who is in her 60s and needs a knee replacement, told Vicki she was crying because she couldn’t get up, but did not holler for help.

“Andy gravitates to patients he visits who are upset or in distress. He picks up the scent and goes to them. He is amazing and smart,” Vicki said.

Andy and Ike, the family’s 9-year-old Golden Retriever, are certified therapy dogs and affiliated with national Pet Partners organization. Andy also is one of two dogs in Indiana who is a member of the national H.O.P.E. Animal Assisted Crisis Response Team. 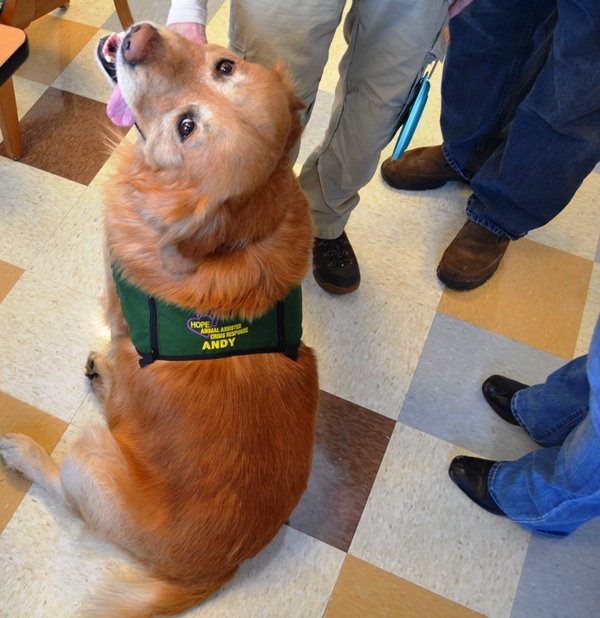 James Callaghan, MD, hospital president, and Trish Weber, vice president of operations and chief nursing officer, decided to throw a party for their canine friend after hearing what he did and knowing what he means to their patients.

“It’s one thing how his service here uplifts patients’ spirits, but to jump a 4-foot fence, with spikes on top and save a lady who had fallen and surely would have had a bad outcome, is amazing,” Callaghan said.

Weber added the staff was particularly touched because the week prior, an elderly Michigan City woman, who had fallen getting out of her car in the darkness, was found deceased next to the vehicle by a neighbor who had come to plow her driveway in the morning.

“Andy truly is heroic. If it weren’t for him, there probably would have been another sad outcome. And, our patients and staff really look forward to his visits,” she added.

Well-wishers from throughout the hospital gathered on the fourth floor, on the Rehabilitation Institute of Chicago at Franciscan St. Anthony Health unit, where Andy was presented a $50 PetSmart gift certificate (“he loves to shop,” Weber said), a bag of dog biscuits, jerky treats and a card made and signed by behavioral health unit patients.

Andy greeted virtually all of those in attendance in the crowded room, then relaxed on the floor.

“Everyone loves him,” Vicki said. 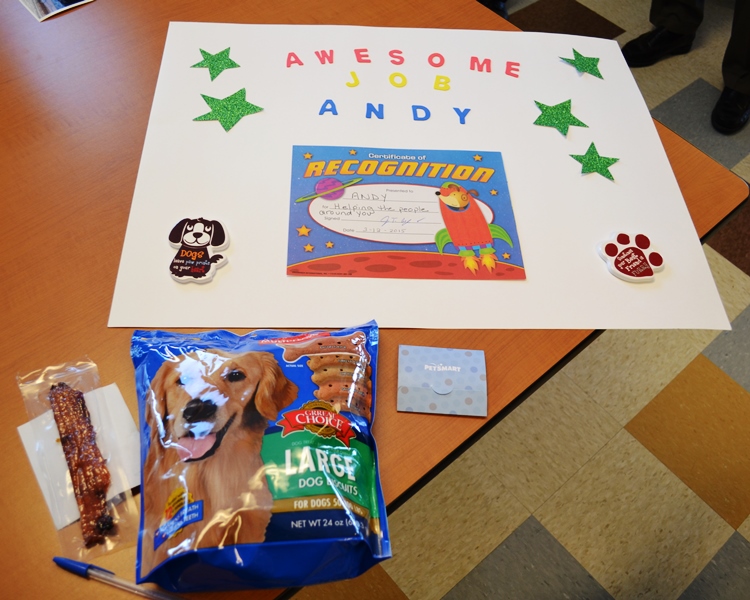