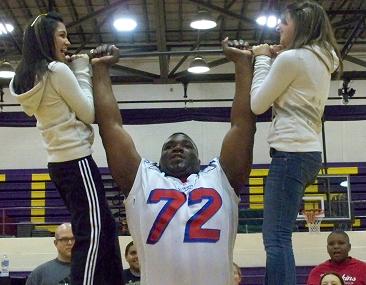 I invited Devin Wyman, who played for the New England Patriots, last week in La Porte to travel around, speaking in schools to help our kids make right choices in their lives.

Wednesday the 24th - Devin joined the kids at "Meet you at the Pole" at La Porte High School and prayed with them before school. We then went in and did two programs in the auditorium. After lunch we did the same at New Prairie High school. The evening session was Devin ministering to a Youth Group at a church in Michigan City, where new names were written down in Glory.

Thursday the 25th - The morning program was at Problem Solving Court (Drug Court) for about 60 participants and the Judicial personnel, where Devin and I both shared about turning our lives around. The afternoon we did a program South Central High School. The evening session was Devin speaking to two youth Groups in La Porte.

Friday the 26th - We did 2 programs at Kesling Middle School in the morning and then on to Oregon Davis High School for the afternoon. Due to the airport problems in Chicago, Devin's flight was cancelled so I arranged for him to speak, eat and play "corn hole" with the La Porte High Cross Country Team. I was able to get him a flight on Saturday, which took 7 hours for him to get home due to delays.

As a result of the 3 days, Devin spoke to almost 3, 500 youth in 11 programs. I went through all the 3x5 cards and returned Hundreds of "HOT" cards to the schools covering the topics of Bullying, Rape, Drugs, Abuse (Physical and Sexual), and more. Some principals were at a meeting on Thursday, and Choices (the name I use) were talked about. As a result I have emails from principals wanting us to come to their schools as early as I can arrange it.