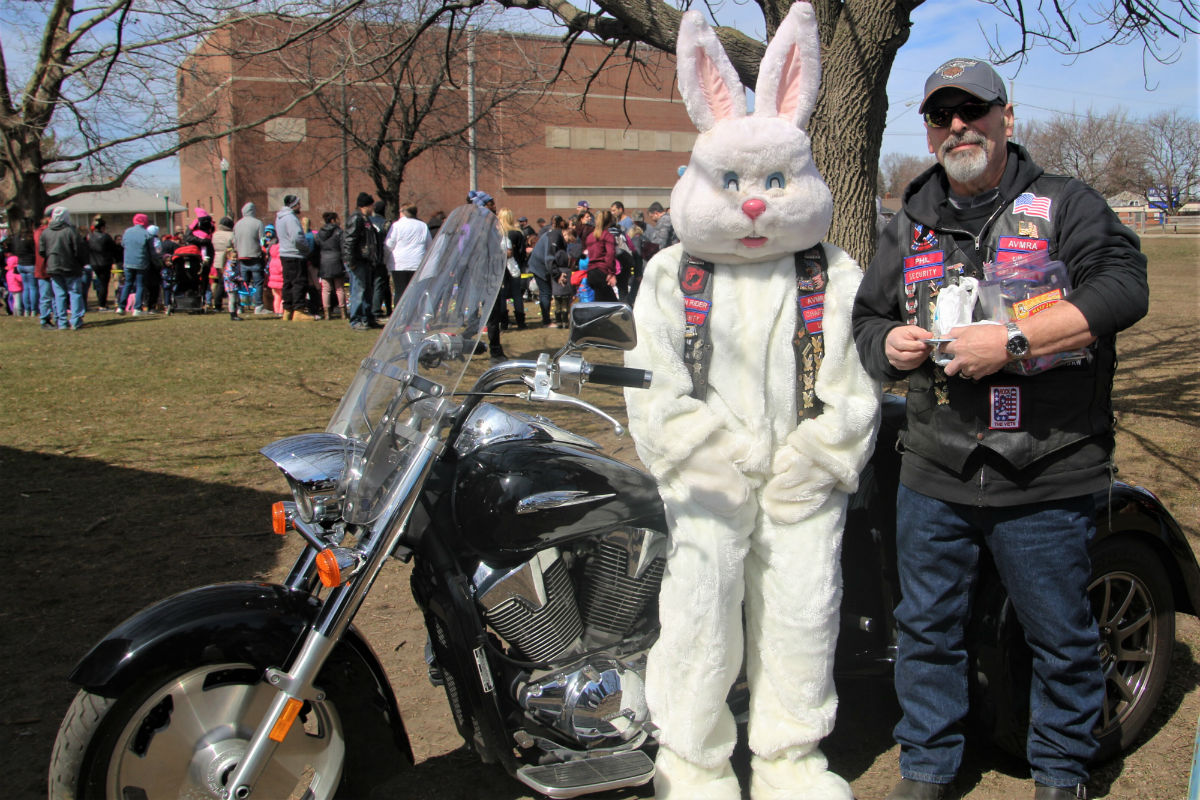 On a chilly afternoon in Hammond, children and community members gathered at Hessville Park for the 15th annual Easter Egg Hunt. Bundled in winter coats and donning pink bunny ears, the participants and volunteers brought a little bit of spring cheer to a brisk Palm Sunday.

The event, organized by the City of Hammond and the American Veterans Motorcycle Riders Association, included everything from egg hunts for multiple age groups to pictures with the Easter Bunny. As kids rushed for the eggs, they hoped to find an egg with a special ticket that would win them a basket prize filled with goodies. The excitement combined with a warm cup of coffee and a sweet treat guaranteed that the participants found some much needed warmth.

“We always have it rain or shine - people still come out!” said Lisa Medellin, member of AVMRA and one of the primary organizers for the event. “It’s just for the kids. They love it, they have a lot of fun.”

In the past, two Easter egg hunts were held on consecutive days - one by the City of Hammond and another by AVMRA. This year the two teamed up to organize one big event on March 25.

“This is our first year working together with AVMRA,” explained Rosa Maldonado, a representative for the City of Hammond. “I did this by myself last year and it’s hard. It’s hard work to pull this off.”

Open to 1-year-olds to 14-year-olds and with donations from many community organizations and businesses, the event is truly a family affair and is quickly becoming a favorite across generations.

“We’ve got some parents out here that were just telling me that they came here when they were littler and now they’re bringing their kid. We’ve been doing it so long that they’re just used to it happening,” said Toby Standley, a member of AVMRA. “We do a lot of stuff in the community around here, and the community helps us out with a lot of stuff, so this is one of our big give-back things.”

One participant, Lily, age 5, has a special connection with the event. Her grandma, Gina Seitz, has been a member of AVMRA for 13 years. While she attends all of the other events and programs that AVMRA holds every year, the Easter egg hunt is one of Lily’s favorites. This year, she won a sand bucket for the beach which she hopes to use once the weather gets warmer.

By combining their efforts and resources, the City and AVMRA were able to put together a very successful Easter egg hunt that brought local citizens, businesses, and community organizations together. Donations from the Hammond Parks Department, the Hammond Parks Foundation, Calumet Bakery, and many others made this event possible and served as a wonderful demonstration of what holidays are all about - bringing the community together.

“This is our community,” said Paul “Pappy” Day, Commander of the Hammond AVMRA. “It’s really good when you’ve got the help from the mayor and the Parks Department….It really helps out a lot.”

With such a success, the City and AVMRA hope to continue this joint effort in the coming years.

“For the benefit of the children, we combined our efforts and this is what we end up with,” explained Maldonado. “I’m really excited and I hope to work with them in the future!”