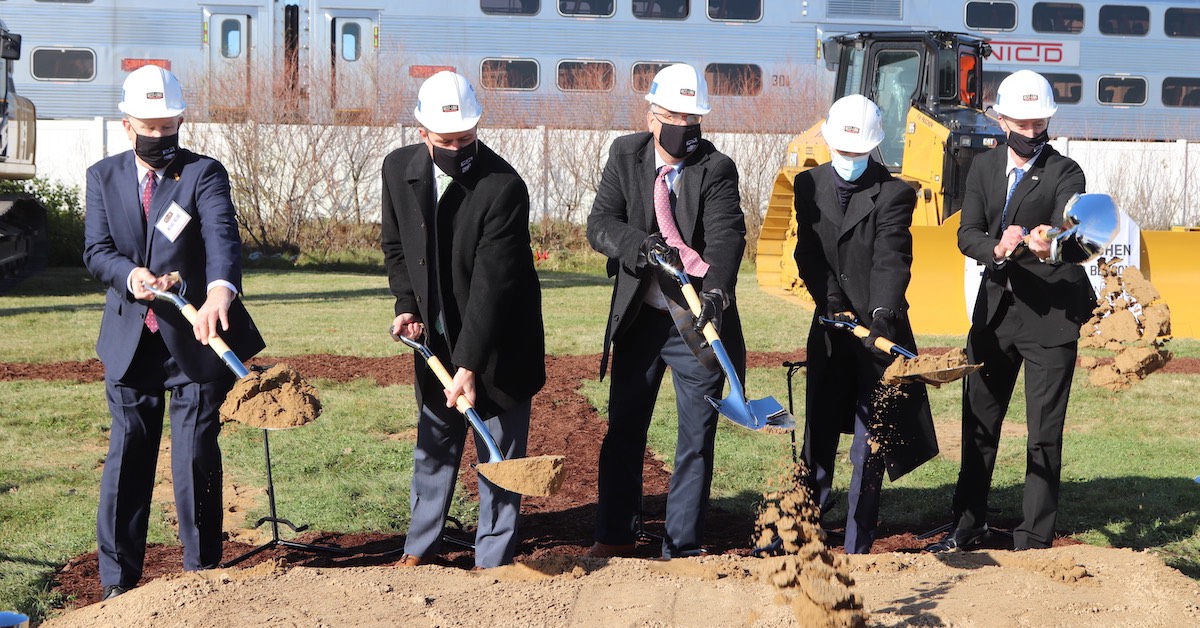 Numerous political officials from Indiana and beyond gathered in-person and virtually for the signing of the Full Funding Grant Agreement for the West Lake expansion of the South Shore Rail Line this morning. The grant agreement was signed virtually by FTA Deputy Administrator K. Jane Williams and in-person by Commissioner of the Indiana Department of Transporation Joe McGinnis after remarks were made by Governor Eric Holcomb and other federal partners. With all signatures now in place, work can officially begin on the Double Track project of the South Shore Rail Line.

“When I was recruited for this job, I was handed a visionary, 20-year strategic plan for major commuter rail investments with West Lake and Double Track as the centerpiece” said President of South Shore Line Michael Noland. “The dream was connecting the West Lake corridor to Chicago, Gary, Chesterton, Michigan City, and South Bend International Airport and cutting the trip time from here to Chicago by 45 minutes.”

Holcomb noted that with so many people from surrounding states and around the world moving to Indiana, officials want to continue making strategic investments in the state. This billion-and-a-half-dollar rail project will allow access to one of the largest economies in the world. North Township Trustee and democratic nominee for congress Frank Mrvan believes this project displays strength through unity.

“The project, as the governor mentioned, is transformational,” Mrvan said. “It’s an example of federal, state, and global elected officials coming together to overcome obstacles and be able to fund our future. What this does is allow us to connect to the third-largest global economy in the world and ensure that future generations are here and connected to that.”

Initiating this project involved interaction between the federal government, state government, and state legislature, as well as Indiana cities and towns communicating to determine if this South Shore Rail Line project was worth the tax dollars it required. Considering the project would increase home values and access to businesses, they determined the project would have an overwhelmingly positive impact on Norwest Indiana and beyond. President of NWI Regional Development Authority Bill Hanna believes this is project is hugely important and beneficial to Indiana.

“Today we break ground on a project that I would argue represents the most significant investment we’ve made in ourselves in decades,” Hanna said. “This all comes from strong leadership from our governor and our partners. It’s important to know that they put people, jobs, and good government in front of politics. Our governor has shown all-too-rare leadership and took this vision and ran with it from day one of his administration.”

The new transit-oriented development businesses will allow towns along the rail lines such as Dyer, Munster, Hammond, and East Chicago to grow through increased job opportunities in the community. Mrvan hopes the increased access and jobs resulting from this project will encourage young people to stay in Indiana.

It took many heads and hands joined together to get this project started, and Visclosky is grateful for their support.

“I want to thank Secretary Chao and Governors Daniels, Pence, and Holcomb,” Visclosky said. “I am also grateful to Senators Young and Braun, our state legislators, local leaders, and everyone at the RDA and NICTD for their perseverance and dedication for seeing this investment in the future of Northwest Indiana through to fruition."

With so many dedicated parties involved in this project, Holcomb believes this project will create a brighter future for Indiana.

“To see a plan come together, as intended, is a real source of pride for so many folks,” Holcomb said. “It’s really about investing in ourselves and our future. A lot of things go back to Congressman Pete Visclosky. I remember the exact day when we all sat down, and he explained how critically important this was for the whole state of Indiana. He was right then, and it’s right for us to celebrate today.”

To learn more about the expansion of the South Shore Rail Line and other Northwest Indiana projects, visit https://www.in.gov/rda/ and https://www.mysouthshoreline.com/.