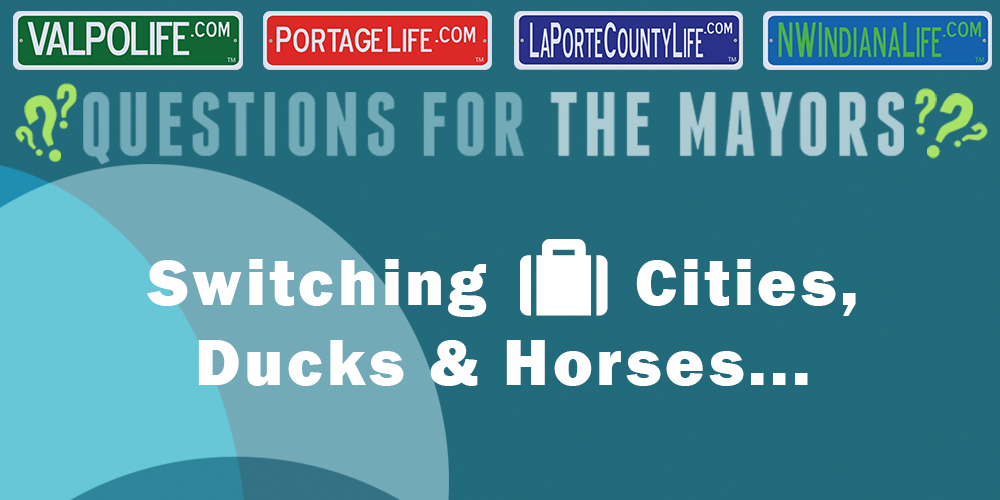 Great Mayors seem to be a staple in Northwest Indiana. While their politics and decisions get discussed and highlighted each and every day, the lighter side of the mayoral job often gets overlooked. From embarrassing moments to the songs they’re listening and singing along to, we took a moment to ask a few Region mayors some lighthearted questions, hoping to get to know them a little better than before.

If you were going to switch cities with another Mayor, who would it be?

The Mayor of Mayberry, North Carolina…..things seemed simpler there.

I would not want to switch but if I did – Whiting – beautiful lakefront of Lake Michigan and they have a very nice downtown as well.

None, I love my City!

La Porte is my home town. I am a lifelong La Portean. Being Mayor is an honor; there is not another Mayor with whom I would switch cities.

I like all of our Northwest Indiana Cities, but I’d love to be Mayor of Valparaiso – I’d still have hair!!

Would you rather fight one horse sized duck, or 100 duck sized horses? Why?

One horse sized duck, dealing with one is easier to focus on.

One horse sized duck; if I must fight I would rather do so against 1 vs. 100. The tactics and strategy, although complicated fighting a horse sized duck, are singularly focused enhancing my opportunities for a desirable outcome. And in the words of one of my all time favorites, Groucho Marx, “why a duck?”

I’d rather fight a duck sized horse, but if I need to answer the actual question, one horse sized duck. The reason is that I always bring in a larger group of staff members to tackle big projects or issues and we address it as a team and I’m usually stuck fighting the 100 smaller issues alone.

Every mayor in Northwest Indiana has a unique personality and some interesting moments to share! Across the Region, these mayors are taking the time to better their communities and gave us a little insight into themselves outside of the political sphere!