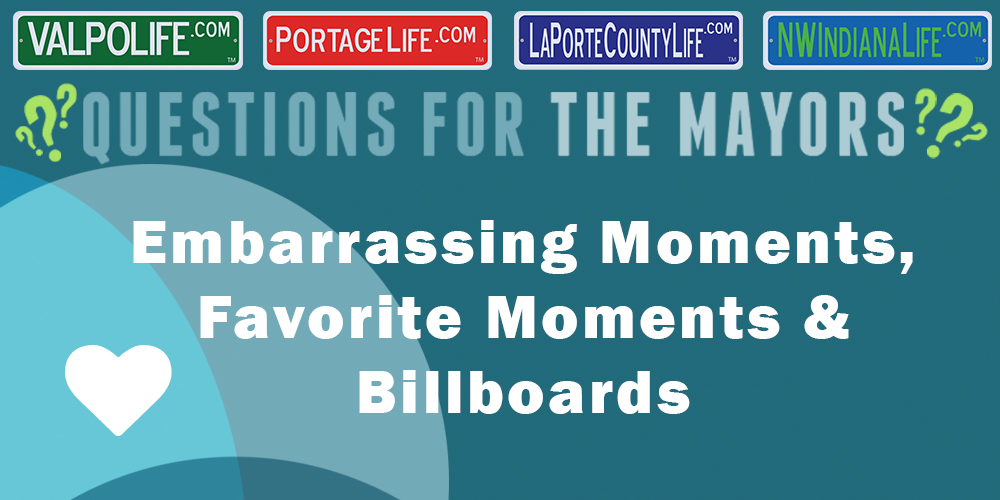 Great Mayors seem to be a staple in Northwest Indiana. While their politics and decisions get discussed and highlighted each and every day, the lighter side of the mayoral job often gets overlooked. From embarrassing moments to the songs they’re listening and singing along to, we took a moment to ask a few Region mayors some lighthearted questions, hoping to get to know them a little better than before.

What was your most embarrassing podium moment?

I was giving a speech in which we needed to have the exact time before speaking. So, we used a cell phone (the phone was not mine) that displayed the time and placed it on the podium. I wasn’t aware that the ringer was not on silent and during the speech someone called the phone which startled me. I proceeded to toss the phone off the podium towards my staff and continued with my speech. Nonetheless – we don’t use cell phones for this purpose anymore.

When I dressed up as Leonardo Da Vinci for a recycling reward.

I was presenting a proclamation to a distinguished community member. The lighting at the podium was not great and the sound system, no matter where I held the microphone, emitted constant feedback. I finally found a spot, holding the mike high over my head to eliminate the feedback with just enough light to allow me to read. The essence of the proclamation was not changed, it just looked like I was a contortionist reading it.

Way too many to select just one!!!

What historical moment of your city or town is your favorite?

When then Governor Pence came to Michigan City to recognize our public health and safety professionals who saved Nathan Woessner from Mount Baldy.

The Old Lake County Courthouse was built in 1878. Because Crown Point had no waiting period for marriage licenses, the city became a popular place to get married and became known as the "Marriage Mill." There were many famous people came to be wed here in Crown Point, including Tom Mix, Rudolph Valentino, and Cassius Clay to name a few. Along with the courthouse, our historical downtown square is also very motivating and inspirational to our community. It defines our city and helps maintain our hometown feel.

When the State of Indiana Bicentennial Torch passed through our community.

The historical and generous donations of the Samuel Fox family continue to shine in La Porte. The family donated the land for the Fox Memorial Park in 1913. The Civic Auditorium, dedicated in 1930 was a gift to the City of La Porte from Maurice Fox, in honor of his parents. These significant gifts are enjoyed by many to this day.

The ribbon-cutting ceremony for the Lakefront Park Renovation Project.

If you had a billboard, what would it say?

It would say: “We are all filled up on vision; we need more action.”

Join our winning team “Building a Stronger Community from Within” NW Indiana best place to Live, Work, and Play!

Together Everybody Achieves More

Welcome to La Porte, city of beautiful lakes, parks, charming downtown, and so much more! Come have fun in La Porte. We are open 365 days a year!

Every mayor in Northwest Indiana has a unique personality and some interesting moments to share! Across the Region, these mayors are taking the time to better their communities and gave us a little insight into themselves outside of the political sphere!