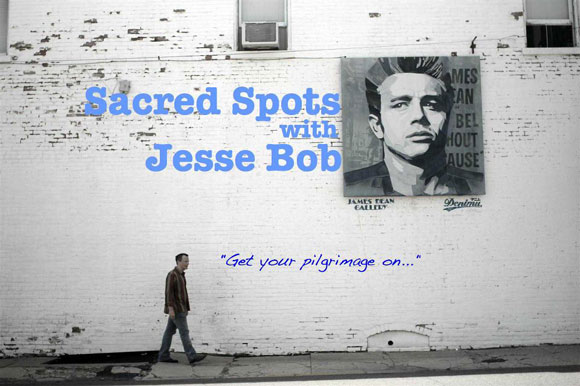 “Sacred Spots with Jesse Bob” is a travel show unlike any other. It will take viewers to a special destination each week, some old and some new, that hold special meaning, sometimes to millions of people, sometimes to only a few.

But more than the ‘conventional’ spots, which are generally thought to be sacred, the show will visit other spots that have become sacred to a group of believers: Elvis’ Graceland in Memphis; the Large Hadron Collider in Geneva, where scientists are currently searching for the “God particle;” and Area 51 in Nevada.

More than simply showcasing the destination, Harper said, “The show will use humor and respect to delve deeper into the meaning these places hold for the people who visit them, often times traveling thousands of miles to do so.”

“What makes a spot sacred? Is it its age? Because something miraculous happened there? What is the meaning these places represent to believers? Can one place be called more sacred than another? What does the word “sacred” even mean?” These are questions the show will explore by visiting the places and interviewing the believers, adherents and pilgrims that travel to and take part in the rituals and traditions of these spots.

“We actually wrote and produced a short ‘sizzle’ reel to present to the producers and networks in which my crew and I visited Wrigley Field, James Dean’s boyhood home and the Bahai Temple. Spots that may not come immediately to one’s mind as sacred, but that are in fact very sacred places to specific groups of people.”

Unlike other travel shows that may give the “do’s and don’ts” of visiting attractions, or that highlight the architectural nuances of historic buildings, “Sacred Spots” hopes to discover that which cannot be seen, but must be felt.