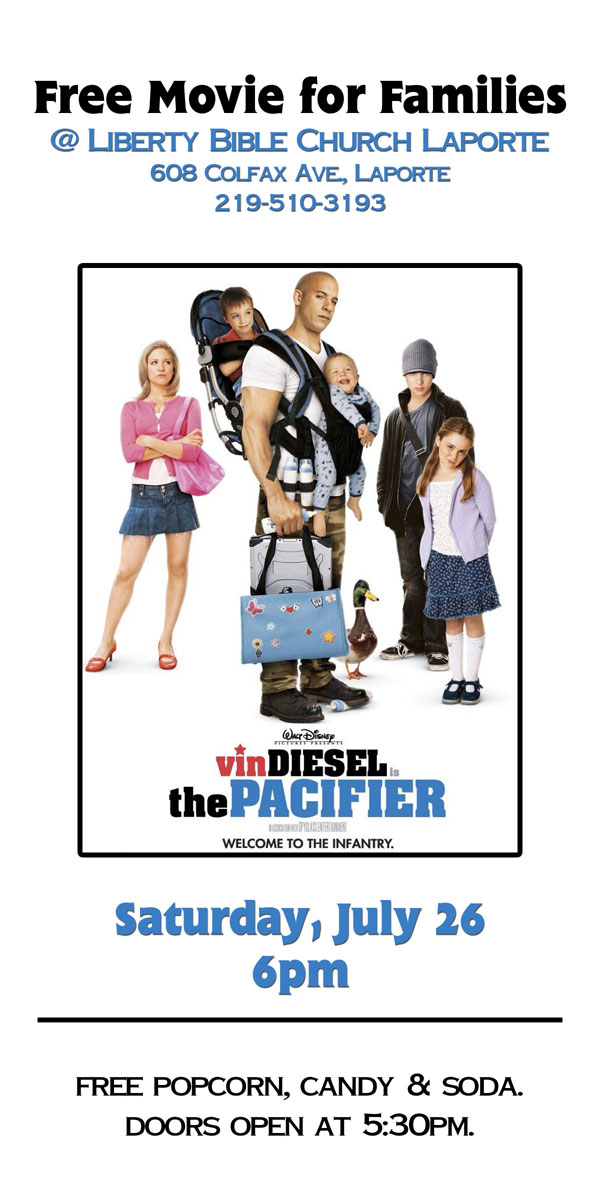 Liberty Bible Church-LaPorte is excited to announce a “Free Movie Night for Families” on Saturday July 26th showing “The Pacifier” with Vin Diesel. Doors will open at 5:30pm with the movie showing at 6:00pm. The church is located at 608 Colfax Avenue, LaPorte(former LaPorte Movie Theatre) Our desire is to provide a fun and safe place for the whole family to enjoy in our city. Admission and concessions are free. Call for more information at 219-510-3193

Movie Synopsis: The toughest man in the American military faces a new kind of challenge -- looking after four kids in soccer-mom suburbia -- in this family-friendly comedy from Walt Disney Pictures. Shane Wolf (Vin Diesel) is a former Navy SEAL who was assigned to protect a scientist working on a top-secret defense project for the government. Despite Wolf's efforts, however, an assassin slipped past him and murdered the man he was guarding. The inventor's project is still being stored in his home, so Wolf has now been assigned to protect Julie (Faith Ford), the scientist's widow, as well as her four children, Zoe (Brittany Snow), Seth (Max Thieriot), Lulu (Morgan York), and baby Peter (Kegan Hoover and Logan Hoover). Wolf has had years of military experience in some of the most dangerous places on Earth, but he doesn't know much about raising kids, and he soon discovers his new job demands he be a nanny as much as a bodyguard. The Pacifier also co-stars Brad Garrett, Lauren Graham, and Carol Kane. Author: Mark Deming