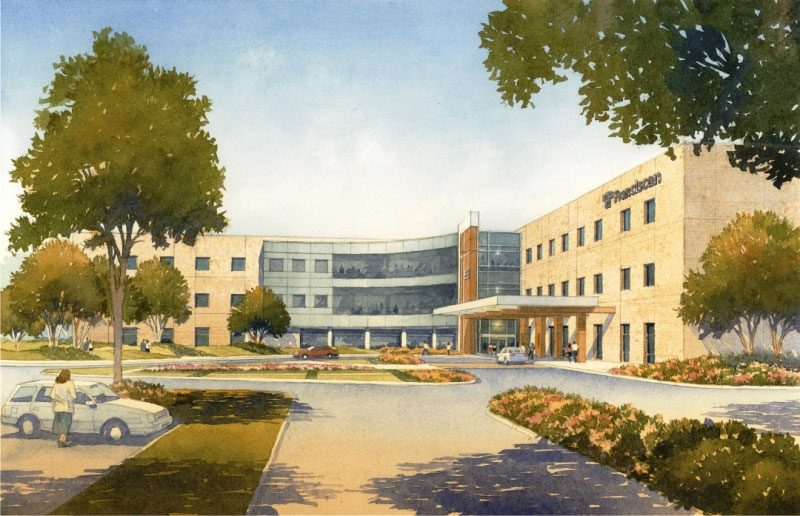 The hospital will be located on property Franciscan Alliance owns at the northwest corner of Interstate 94 and Ind. 421. Tonn & Blank, a subsidiary of Franciscan Alliance, is the general contractor for the project, which is slated for completion in 2017.

The new facility will feature up to 120 all-private inpatient rooms, outpatient services and a medical office building. Franciscan Alliance owns nearly 70 acres at the site, allowing room for expansion. Construction is scheduled to begin in spring 2016.

“We have discussed this project and the need for a new hospital building for more than a year,” Diamond said. “It is exciting to get to this point and to know a new hospital is right around the corner. This is a project that is good for Michigan City and good for health care in Northwest Indiana.”

Diamond, who also serves as senior vice president of Inpatient Services for Franciscan Alliance, said the health care network already is discussing alternate uses for the newer portions of the Homer Street hospital, including converting those sections to assisted living, long-term care or hospice, but no final decisions have been made.

Added Michigan City Mayor Ron Meer, “I was thrilled to hear about plans by Franciscan Alliance for a new hospital in Michigan City. Franciscan St. Anthony Health is our hometown hospital. Access to world-class medical care is important to those looking to invest in our community. The location just off the highway is important, too. It will make this new hospital even more convenient for residents throughout LaPorte County, as well as southwest Michigan. “

Dr. Vidya Kora, a member of the Northern Indiana Regional Board for Franciscan Alliance and a member of the Franciscan St. Anthony Health medical staff, said the medical community has been discussing the need for a replacement hospital for several years.

“We are excited this dream will soon become a reality,” Dr. Kora said. “Although Franciscan St. Anthony's provides physicians and patients with state-of-the-art equipment, patient rooms and service areas are smaller than you find in hospitals being built today. Building a new campus will be good for our patients, our physicians, staff and the community.”

The new location will make getting to the hospital much easier for patients traveling from Porter and LaPorte counties in Indiana, as well as those from southwest Michigan who rely on Franciscan St. Anthony Health for their health care needs.

Franciscan Alliance President and CEO Kevin Leahy said at today’s prices, the per-bed cost of building a new hospital is projected to be between $1.4 and $1.8 million. Leahy expects the project will cost approximately $175 million. A final cost is dependent on the eventual plans for repurposing the existing hospital campus.

"It helps to have the talent and expertise Tonn and Blank brings to the table when you want a high-quality construction project built on time and on budget,” Leahy said. “Hospitals are complex building projects that incorporate some of the most technologically advanced equipment used in any business. Tonn and Blank has done an outstanding job for us in the past and we know their team, who live and work in the surrounding area, will build a hospital that will be a source of pride for the Michigan City community.”

The Sisters of St. Francis of Perpetual Adoration were asked by community leaders in 1903 to build a hospital in Michigan City.

“Over the past 112 years, we have done our best to meet the health care needs of those we have been privileged to serve,” Sister Jane Marie said.

The first patients were treated in a 25-bed facility. In 1924, a four-story, 100-bed building was constructed, followed by additions in the mid-1950s. In 1965, the hospital was expanded to treat 200 inpatients. A medical office building and cancer center were opened in the 1980's. In 1996, Memorial Hospital was merged with Franciscan St. Anthony and that led to another addition in 2001.

“All of these additions have been constructed around the 1924 structure,” Allegretti said. “Although these buildings have served us well in the past, it is time to construct a new facility that will serve our patients for generations to come.”