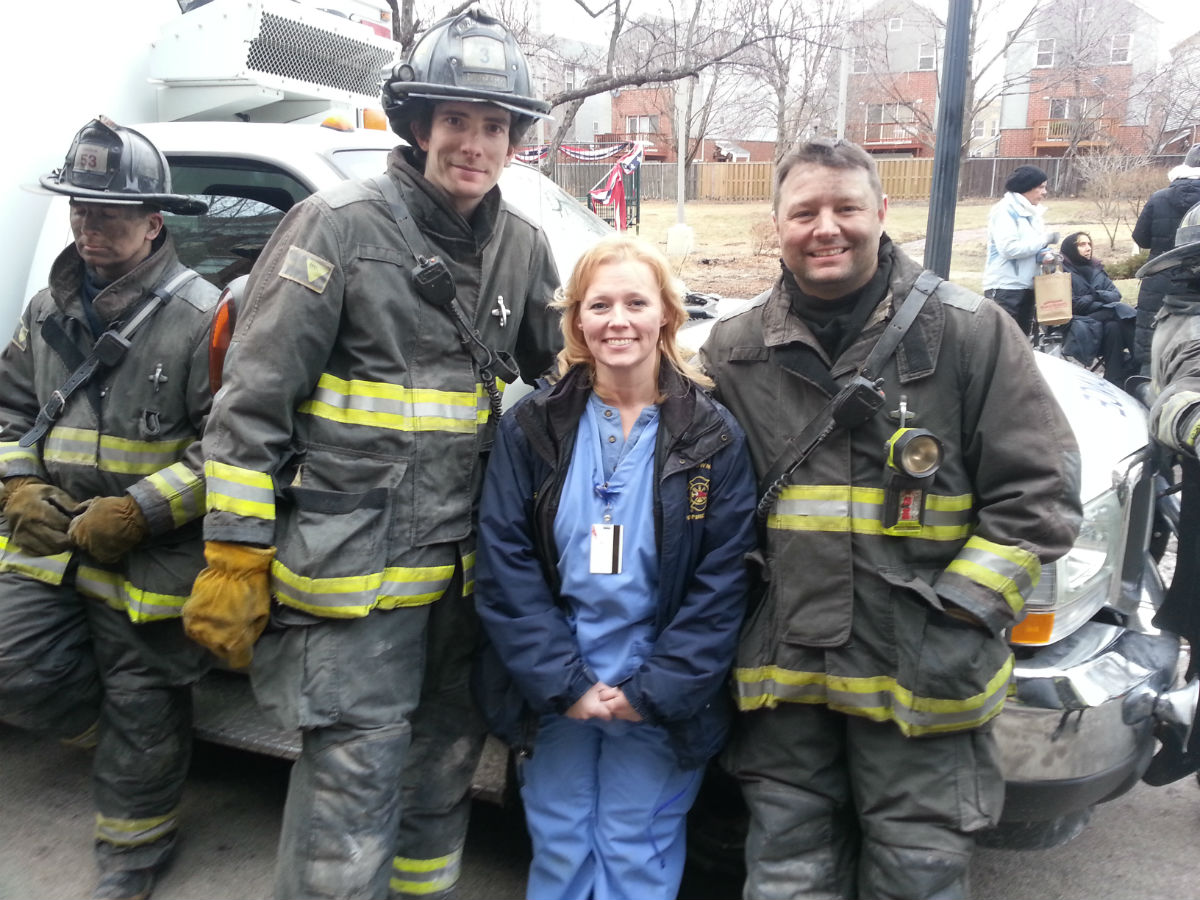 Lori Postma, R.N., Franciscan Healthcare-Munster emergency preparedness and bioterrorism coordinator, will soon appear in an episode of Chicago Fire but demonstrates she is a true star by jumping to the aid of a Sam's Club shopper.

March 24, 2014 -- A true star both on and off the television screen, Lori Postma, R.N., Franciscan Healthcare-Munster emergency preparedness and bioterrorism coordinator was at Sam's Club in Merrillville on March 14 when she heard a store announcement asking if there was a doctor or nurse in the store. She rushed over to see if she could help, and saw a woman lying on the ground next to another woman who was crying.

Lori says, "The woman had a pulse, but she was blue and not breathing. I knelt down to listen for breathing, but there was none. I used a Jaw-Thrust maneuver to try to open her airway; I repositioned a few times and heard a small gasp. Then I performed a sternal rub to stimulate breathing. She began to breathe on her own and regained color quickly. I then held C-spine until the ambulance got there. By then she was waking up."

Afterward, the manager of Sam's Club thanked Lori. "She called me a hero," Lori says. "I'm not a hero. God puts us in the right place at the right time to do the right thing.'"

In addition to her real-life work as an emergency preparedness and bioterrorism coordinator, Lori is a firefighter for Lake Township Fire Department in Lake Village, IN. Her passion for providing emergency medical care recently led her to Chicago where she took part in the filming of a special two-part Chicago Fire and Chicago P.D. television crossover event. Lori was initially cast as a firefighter extra on the show. However when producers learned of her profession, she was asked to take on a larger role as a "featured extra." Using her wealth of professional knowledge, scenes show Lori caring for patients and giving instructions while being featured as a disaster nurse.

For more than two weeks, Lori spent weekends and days off filming in the now empty Sears Merchandise Building Tower in the Lawndale neighborhood of Chicago. "I had a great time and learned how much goes into 43 actual minutes of a TV show," says Lori. "It was easy for me to get into the role because the types of scenes we filmed are things I've actually trained for."

In this two-part episode, the first airs April 29 on Chicago Fire and concludes the following night on Chicago P.D. The episodes will air on NBC at 9 p.m. CDT. "I am a nurse 24/7 and my mission remains the same whether it is at a hospital or at Sam's Club," says Lori. "Filming a disaster scene on TV was fun because it shows the public what really goes into real-life disaster preparedness."