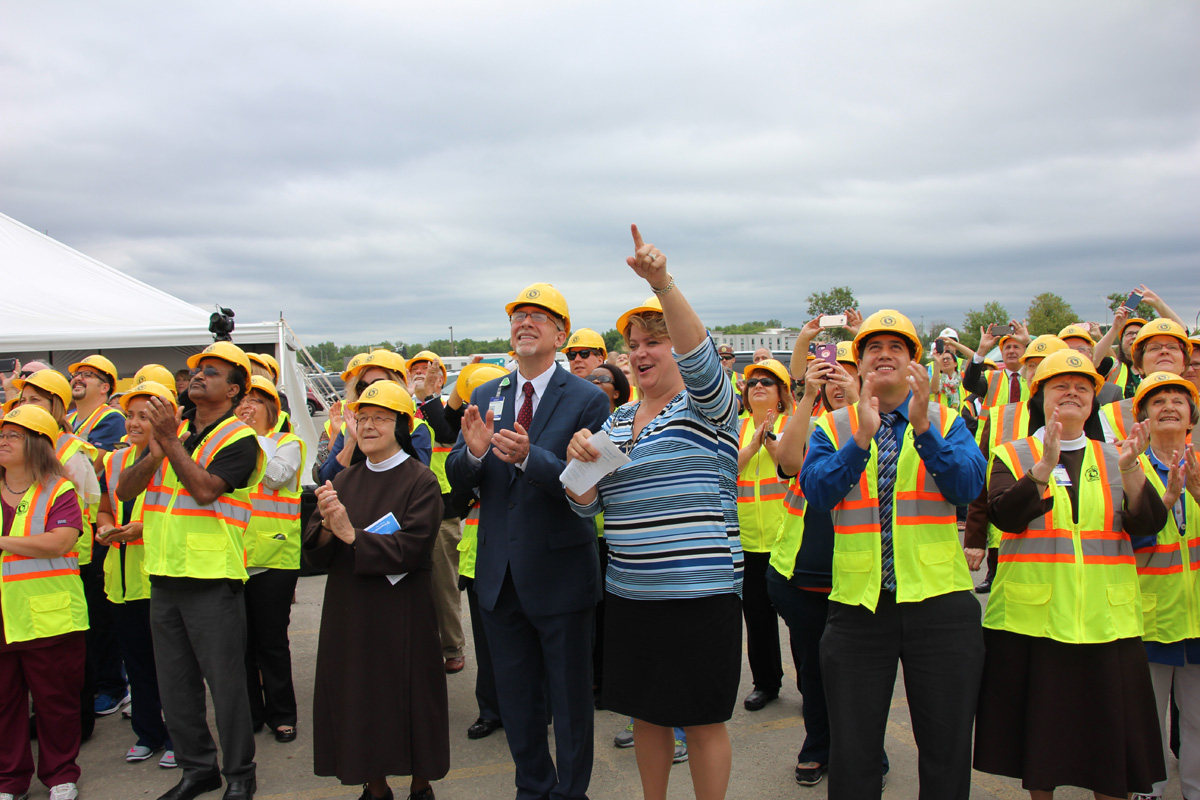 It was an exciting day in Michigan City on Friday as Franciscan Health marked a significant step towards the completion of their new, $232 million hospital with a ceremonial topping-off of the steel structure.

The final beam was the star of the show at the event, which drew hospital officials, staff, and other well-wishers from around the community, many who signed the beam or left messages of enthusiasm and encouragement. After a short program, onlookers watched as construction crews hoisted the beam in place and attached it to the rest of the completed steel structure amidst the fanfare from those who came to celebrate the occasion.

“It feels terrific,” said Dean Mazzoni, President & CEO of Franciscan Health Michigan City, when reflecting on the ceremony and the progress that’s been made since breaking ground in 2016.

“There’s just so much excitement everywhere - in the community and in the hospital,” Mazzoni continued. “People are really getting very excited. When you get to see the steel coming to completion like this it really starts to feel real. You can see the skeleton of this building and, after this, the exterior will go up and it will then begin to come together very quickly.”

The plan for a new Franciscan Health Michigan City hospital has been in the works for some time and, not long after last year’s groundbreaking and blessing ceremony, the structure quickly began to take shape.

“A lot of work has gone on behind the scenes to get us to where we are today,” said Trish Weber, Vice President of Operations and Chief Nursing Officer. “Everyone’s been very engaged and we’re counting the days until we get the exterior up, and we can then countdown to move-in day.”

“Working behind the scenes and with transition planning, our goal is 100% patient safety on the day of our move and, together, we’ll make this happen,” Weber added. “The future is Franciscan!”

Franciscan Health Michigan City hospital sits on 86 acres which is conveniently located at the northwest corner of I-94 and U.S. 421, making easily accessible from every direction.

“It’s really exciting to be here as we raise that last beam for this new facility,” said Sister Jane Marie Klein, Chairwoman of Franciscan Alliance. “I, like hundreds of thousands of others, have been driving down I-94 watching the hospital go up and it’s been so exciting.”

Along with signatures and well wishes, the final beam included something special that was very near and dear to Sister Jane Marie Klein.

“We have affixed to the logo (on the beam) a medal of Saint Joseph and one of our Blessed Maria, who is our foundress, so that they will be forever protecting this building and everyone who goes inside.”

With the constant advancements in health care and changes in technology, Franciscan decided that, economically, it made more sense to build a new hospital as opposed to retrofitting the existing one. Franciscan personnel are looking forward to better serving the region through newer, more advanced technology.

“With the many talents of the men and women of Franciscan Alliance, this structure is being topped off,” said Matthew Troy, Medical Staff President. “This new hospital will afford our medical staff the opportunity to work in a state-of-the-art facility with cutting edge technology.”

Troy spoke about the construction workers making the hospital come to life a little more every day.

“Today it’s especially important to recognize and acknowledge that the people with the hardhats, the blueprints, and the work boots are also part of the healing hands of Franciscan Alliance,” he said.

Franciscan Health Michigan City hospital is slated for completion in the fall of 2018. To stay up to date on all of the project developments or to find out more about Franciscan Health, visit: www.franciscanhealth.org.