The annual Ugly Sweater Social organized by the NWI Leaders, a young professional group, becomes more popular every year. That was evident Friday night as about 60 took part in the networking event at the Shoreline Brewery in Michigan City.

Charlie Roberts, one of the founders of the group four years ago, said this year’s event doubled the number of attendees last year.

“What a great turnout,” he said.

Bill Gertner, assistant vice president at Horizon Bank and board member for NWI Leaders, said the group started “to make sure young professionals in the area stay in the area.” 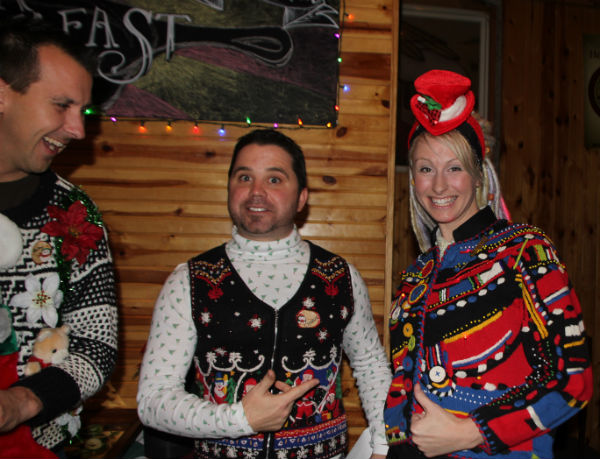 The Ugly Sweater party is in its fourth year, but is not the only major event the group organizes. In August, the first “Brewer’s Brawl” was held in Washington Park. The event sold 250 tickets, with proceeds going to help the United Way of La Porte County, Gertner said.

“We put that together in three months and now we want to make that an annual event as well,” Gertner said.

According to the NWI Leaders Facebook page, there are some 450 members of the group. While the group began in La Porte and Porter counties, the eye is on expanding to Lake County and having a larger presence there.

Sean Gertsch, another board member from Crown Point, said the sky is the limit for the group.

“We are trying to give young professionals a chance to find a connection they might not find otherwise,” he said.

Gertsch was the winner of the “ugliest sweater” award at the 2012 event, but was unable to retain his crown. This year’s prize went to Teresa Roberts, with Dany Bernethy taking second and Andy Hynek getting third.

“The ugly sweater thing really seems to be taking off,” Gertner said. “Shoreline gets a great crowd every Friday night, the only concern was that we’d take away from their business by being here, but we assured them that with our group that was not going to happen.”