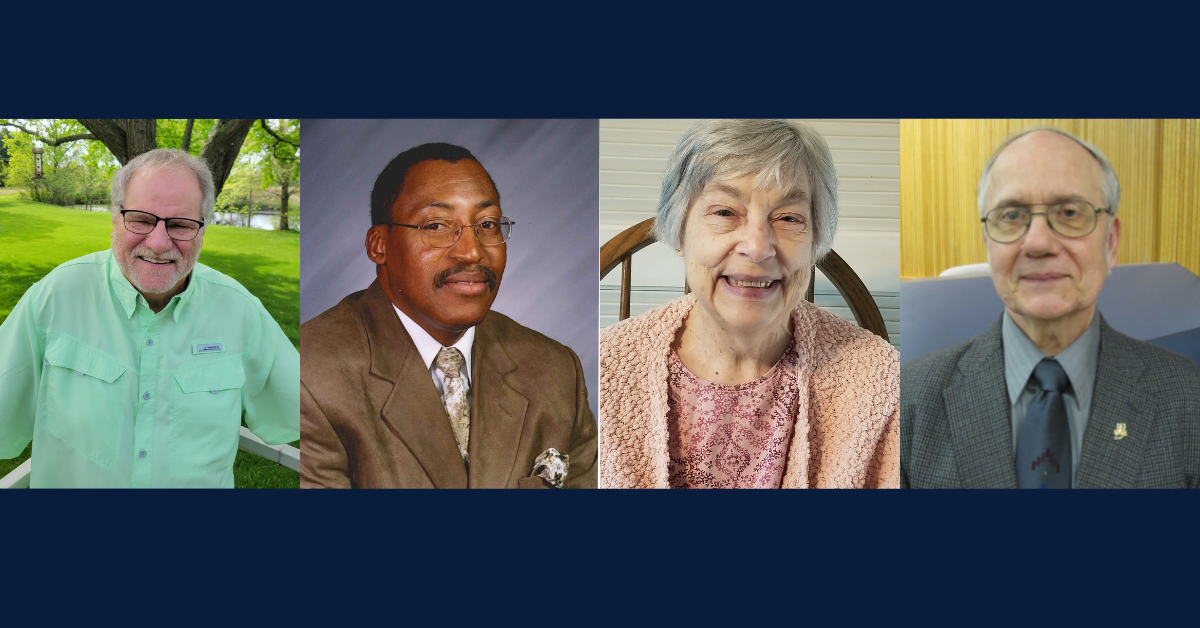 Dombkowski worked for MCAS for 33 years, serving as a Teacher, Principal, and Title 1 Program Administrator, working at Jefferson, Knapp, Riley, Marsh, and Niemann schools, as well as the MCAS Administration Building.

Currently serving on the MCAS Board of Trustees, Dombkowski received several nominations to be selected as an inductee. During his acceptance, he pointed out the irony of being one of the original committee members to help establish the Wall of Fame in 1976.

“We felt like family there … we were educational partners,” she said. “Mr. Dombkowski encouraged us as parents to partner with teachers to ensure the success of our children. He never knew how many children and adults he inspired with that philosophy.”

Also inducted to the Wall of Fame this year, Higgin served MCAS for 15 years as Coordinator of the Safe Harbor After-School Program. His plaque was presented by Sherri Silcox, who worked with him in the Safe Harbor program for many years.

Upon Higgin’s retirement, Silcox took over the Coordinator role – describing that moment by saying “I had to fill those big shoes … and I had to wear a lot of socks to make that happen.”

Silcox said Higgin touched more than 10,000 lives during his time at MCAS, adding that he expanded Safe Harbor to include more sites, STEM, and Robotoics. He was known for two “Herbisms” which were “It’s all about relationships” and “Just show up.”

Higgin was unable to attend the event, but Silcox read an acceptance letter he wrote, saying in part, “It’s the people, not the place. It afforded me the opportunity to work with and hire the most fantastic people anyone could ever hope for. Thank you a million times over.”

His plaque was presented by Sarah Hendricks, Co-Principal at Michigan City High School, who submitted one of many nominations this year. Hendricks, who is a former student of Mabone’s, as well as a former colleague, read several words to describe Mabone: class act, compassionate, dedication, sharp dresser, work ethic, selfless, charismatic, loyal, dependable, and an exquisite human being.

In accepting his nomination to the Wall of Fame, Mabone said it was the love of MCHS, the students, parents, teachers and staff that he will always remember.

One of the many who nominated her was Katie St. Germaine, a former Chemistry and Anatomy/Physiology student. While most of St. Germaine’s memories of high school Science class are of projects such as the decorated turtle shell races, she nominated Young for this award because she learned so much during those years.

“When I went to college, I felt like I was ahead of the game in my Science classes, and that was all because of the education I received at Elston,” she said.

Young was unable to attend the event, so her plaque was received by Mark Marz, current Chair of the MCHS Science Department, who said he learned a lot from Young over the years. “She was warm and open to everyone. Her students loved her teaching style and she cared for her students,” he said.

More information about the MCAS Wall of Fame, including a list of past inductees, can be found at www.EducateMC.net/WOF.