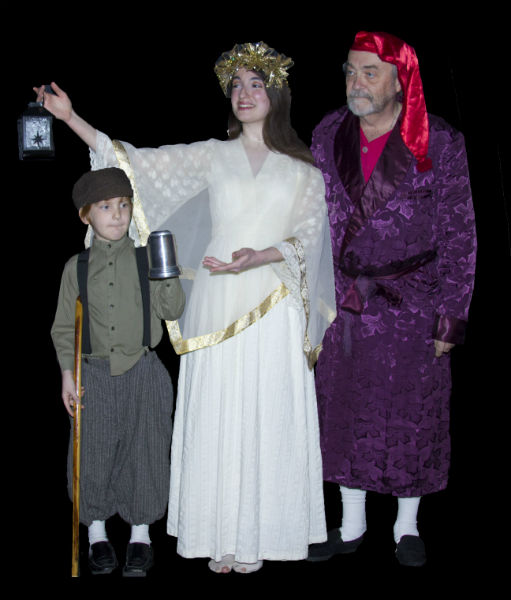 Experience the joy of the holiday season with the Footlight Players' modern adaptation of the Charles Dickens classic “A Christmas Carol,” showing Dec. 6-8 and 12-15.

A cast of 27 children and adults bring the story of Mr. Ebeneezer Scrooge to life on the stage, following Scrooge (Steve Rohe) as he learns the real meaning of Christmas with the help of the three Ghosts of Christmas (Alyssa Rosselli, Aram Arden, and Jeffry Zimmerman) and the doomed Jacob Marley (also portrayed by Zimmerman). Between scenes, a children's choir will sing Christmas carol favorites.

Rohe eloquently plays the miser Scrooge, drawing the audience along through the story from his visions to his eventual transformation. He's played the role several times before, as well as directing an adaptation of the show and starring in other Christmas Carol roles – most recently in Footlight's 2001 production of “The Farndale Avenue Housing Estate Townwomen’s Guild Dramatic Society’s A Christmas Carol.”

“I've always enjoyed the role and the story – curmudgeonly old man sees the light and amends his ways,” Rohe said. “I think Scrooge tells us all that we need to take the occasional step back and look at our lives and try and see what is truly important and act accordingly.”

Co-directors Alice Dickey and Christine Wiegand believe this adaptation will touch audiences because it focuses more on the characters, not on the scenery. “We want people to pay attention to the actors, and we want to give the impression that a good deal of the show takes place in Scrooge's mind,” Wiegand said. “Plus, we have some of the area's cutest children on stage - if that doesn't melt some hearts, nothing will!”

Dickey wrote the adaptation herself, taking dialogue from the book and updating the language a bit for modern audiences.

“For the most part, audiences should recognize it as the classic they know and love,” Dickey said. “I may or may not have included a bit of inspiration from the Muppet version, but they'll just have to wait and be surprised by which part!”

Shows begin at 8 p.m. Thursdays through Saturdays and 2 p.m. Sundays. Box office opens 45 minutes prior to curtain. Reservations are strongly recommended and may be made by calling 219-874-4035 or online at www.footlightplayers.org. Reservations will be held until 15 minutes prior to curtain unless secured by prior payment in full. This is a holiday fundraiser for Footlight therefore patron cards will not be accepted. Tickets are $12 for adults and $10 for children. Non-perishable food donations are being accepted during the run of the show for donation to a local food pantry. Footlight Theatre is located at 1705 Franklin St., Michigan City.