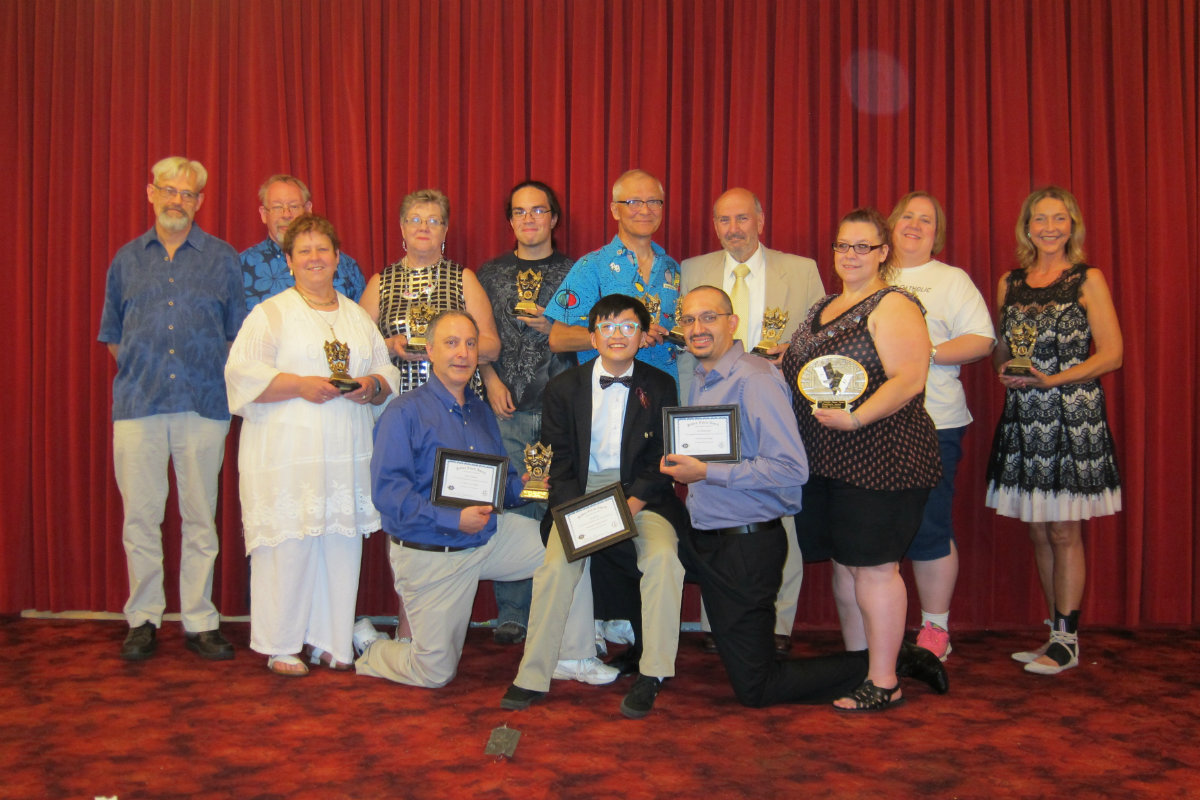 The Footlight Players of Michigan City held their 11th annual awards banquet at the Michigan City Moose Lodge on July 22nd. The evening began with a 5:30 cocktail hour followed by a buffet dinner at 6:30 with background music supplied by Ryan Sweeney. At 7:30 the President, Robert W. Komendera welcomed the crowd of 60 people and announced that John Avila was this year’s hall of fame inductee. He then introduced Sherry Sweeney who was the evening’s emcee. She announced the presenters and with the help of “Golden Girl” Alayna Lauritsen presented the following awards.

The directors and casts of each production voted for Hidden Talent awards for the back-stage technical help. These certificates were awarded to Oona Rice/The Savannah Sipping Society, Chris Whybrew /Clue…the Musical and Brigadoon, Tony Thomas/Seven Nuns at Las Vegas, Shannon Wilhelm/Deathtrap and Joe Blanchard/Lettice and Lovage. The crowd broke out into loud applause as a tearful Bobbi Ann Lauritsen was awarded with the coveted President’s Award that President Komendera presented to her. It was given for her outstanding service to the theater group. A very successful silent auction was continuous throughout the evening with donations from individuals and community businesses. A wonderful fun-filled evening was had by all who attended. Congratulations to all the winners.

The Footlight Players would like to thank everyone that helped make our 11th Annual Footlight Awards Banquet a success. Special thanks to the Moose Lodge of Michigan City and all their volunteers for the use of the hall and the delicious buffet dinner, Sherry Sweeney who acted as our emcee and her husband Ryan who supplied the dinner music and Alayna Lauritsen who was our Golden Girl. Thank you to the many local community businesses and individuals who donated items and gift certificates for our successful silent auction. The evening was filled with happy surprises, well deserved awards and a theater camaraderie that goes unequaled. Without the help and support of our community, our theater would not be able to exist. We are deeply grateful to our patrons and membership. If you are interested in becoming a patron or active member, please contact me at the theater, (219) 874-4035 or on line at www.FootlightPlayers .org Our next production will be the comedy, “Crimes of the Heart” and will run the 2nd and 3rd weekends in August. Hope to see you at the theater.