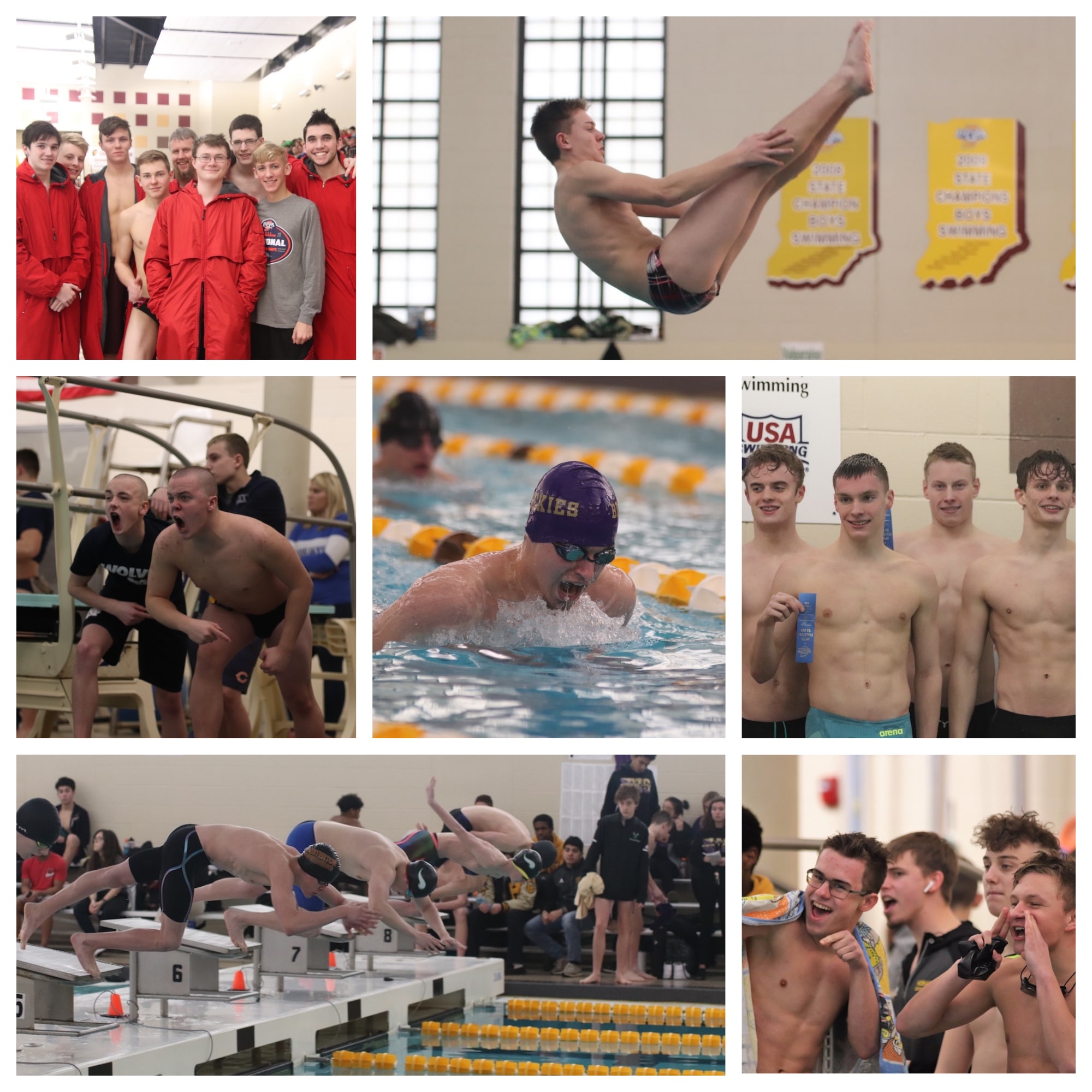 All around the Region, student athletes and coaches are putting in long hours of training and practicing as IHSAA tournaments are quickly approaching. On Saturday afternoon, the swimming and diving teams from around the Region joined together to compete at the Sectional Championships at Chesterton High School.

The energy and excitement from athletes and their coaches could be felt all around the pool. Everyone was prepared to give it their all by dropping times, nailing that perfect diving routine, and setting personal and team bests as each swimmer and diver prepared for their heat. This was what all of them had prepared for during the regular season, so the anticipation was high.

Portage High School Swim Coach Alexander Schreier spoke highly of his team’s time drops from the meet. Those who competed at the preliminary meet on Friday and swam again today in the finals saw time drops ranging from 1 to 10 seconds in their individual races. His swimmers were able to see their hard work from the season become a reality as their speed turned into great times on the board. “It’s been awesome swims, we had a good taper. We definitely are growing the program and we’re looking forward to what’s to come up in the future.”

In every sport, teams spend so much time together as they train and practice that close connections are cultivated between everyone. Friends, families, and coaches could see the strong sense of friendship within their teams as everyone cheered on and encouraged the swimmers and divers in the pool. No matter how they placed or what their time was, each athlete showed their appreciation for their teammates and excitement to be there.

La Porte Head Coach Austin Butcher was impressed with his team’s ability to drop time in every one of their events. “Definitely a good day. We had a small team this year with only about 10 guys, but everybody swam extremely well. Everybody made finals, we had everybody coming back from Friday to swim today, so I’m proud of them, I know they’re proud of each other.”

Each swimmer and diver not only had an entire team behind them Saturday afternoon, but also an entire community. Friends, families, and their schools supported them from the bleachers, cheering them on with the same ferocity and energy as if they were standing by the pool’s edge. It’s a testament to the Region’s love for our teams and our athletes, and its desire to see them be the best they can be.

After the Valparaiso High School Vikings successfully broke their own school record in the 400-free relay, Head Coach Adam Nellessen couldn’t help but share his appreciation for his incredible group of swimmers. The Vikings perseverance during the preliminary meet on Friday allowed them to qualify for all 3 of the relays, and their hard work all season granted them great turnouts in each relay on Saturday afternoon. “I mean I couldn’t be happier with this group. They wanted to go three relays all year, so we gave them the shot and they rose to the occasion.”

These teams come together at the end of their seasons each year for the Chesterton Sectional Championships, and to say that a community is built within these schools is an understatement. “There’s something about this sectional and I don’t know if it’s just how tight all these schools are, but I think you had three school records right here in this relay alone, I know we did and I know Chesterton and [Michigan] City did too,” Nellessen said.

It brings a profound feeling of excitement to the crowd to see your favorite swimmers excel at something they have worked so hard towards. Each swimmer in the pool is working for their own time, but everyone is pushing each other to do their best, allowing for a successful meet to be had by so many.

Each year at the Sectional Finals, coaches from each team send in their votes for who they want to win Coach of the Year. This year featured an unusual tie. Head Coaches Adam Nellessen (Valparaiso), Alexander Schreier (Portage), Stephen Miller (Knox), and Dan Jenkins (Michigan City) shared the title of Coach of the Year. It is safe to say we have some undeniably great coaches in the sport of swimming.

The meet concluded with the Chesterton Swim Team taking home first place, Valparaiso following in second, and Michigan City with third. Congratulations to all teams on an incredible season. Best of luck to those who qualified for the state tournament that is scheduled to take place from February 22-23. Thanks for making the whole Region proud!

For more information on the upcoming State Championship, head to the IHSAA website at ihsaa.org.