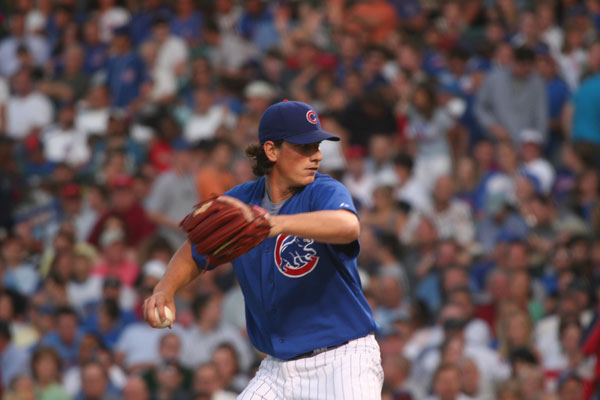 In the business of professional sports, athletes and fans often come to the sudden realization that it is indeed a business. While fans latch on to favorite players on professional teams, all it takes is one transaction for that player to be shipped to a different city.

For fans of Valparaiso High School graduate Jeff Samardzija, an understanding of the ever-changing sports landscape came last weekend. The local hero, who starred in both football and baseball at Notre Dame, was traded from the Chicago Cubs to the Oakland Athletics. Samardzija was shipped to Oakland along with fellow starting pitcher Jason Hammel in exchange for a package of prospects.

Samardzija had been a member of the Cubs organization since being selected in the fifth round of the 2006 Major League Baseball First-Year Player Draft. The hard-throwing right hander broke into the big leagues on July 25, 2008 and instantly became an important member of Lou Piniella’s bullpen for a team that won the division title. After two years of shuffling back and forth between Iowa and Chicago, Samardzija latched on to the big league roster in 2011. He moved into the rotation in 2012 and was the team’s Opening Day starter in 2013 and 2014.

One question to be answered following the trade is how the Valparaiso native will be impacted by the change of scenery. Short term, the deal means that Samardzija will have a chance to return to the postseason for the first time since his rookie campaign. The A’s hold a 3.5-game lead on the Angels for the top spot in the American League West. Samardzija, who will have to adjust to facing American League hitters on a nightly basis, goes from a team with a 38-52 record to one with a 57-34 mark.

Long term, the impact of the trade on Samardzija is far less forthright. Samardzija will not hit free agency until after next season, but the Cubs spent most of this year attempting to hammer out a long-term deal before electing to pull the trigger on the trade. Mainstream media reports indicated that the Cubs offered Samardzija a 5-year, $85 million deal that he turned down.

Samardzija is unlikely to receive the long-term deal that he covets from Oakland. The A’s seldom ink players to lengthy contracts, instead choosing to operate on short-term deals and use crops of young talent to replace those who leave via free agency. From an Oakland perspective, Samardzija appears to be a rental player rather than a long-term rotation member. “The Shark” could find himself trading uniforms again a year and a half from now, if not sooner.

From a Cubs perspective, the short-term impact of the trade is also easy to ascertain, while the long-term impact is fairly complex. In the short term, the deal undoubtedly makes the 2014 Cubs a worse baseball team. Fittingly, the Cubs are 0-6 since sending 40 percent of their starting rotation to the West Coast.

The initial reaction to the deal by many Cubs fans – especially Samardzija fans that reside in Northwest Indiana – may be one of frustration. The team was playing its best baseball of the season and there is a part of any fan that wanted to see the Cubs remain as competitive as possible this year. However, to gain a full understanding of whether or not the trade was a good one for the Cubs, an examination of the players netted in the deal must take place.

The key piece coming to the Cubs in the trade was 2012 first-round pick Addison Russell, who is ranked third among all prospects by Keith Law of ESPN. The Cubs now have three promising young shortstops in the system as Russell joins Javier Baez and Starlin Castro. Russell was hitting .333 for Double-A Midland prior to the deal.

In addition, the Cubs picked up 2013 first-round pick Billy McKinney, an outfielder who has been assigned to Class-A Daytona, and pitcher Dan Straily, who has joined Triple-A Iowa. Straily has pitched in 41 career major league games, including seven starts this season.

With Theo Epstein surrendering both of his primary trading chips in the same deal, he is putting a great deal of stock in the players sent from Oakland to Chicago – particularly Addison Russell. As with all trades, only time will tell whether or not this move was a good one for the long-term future of the Cubs.