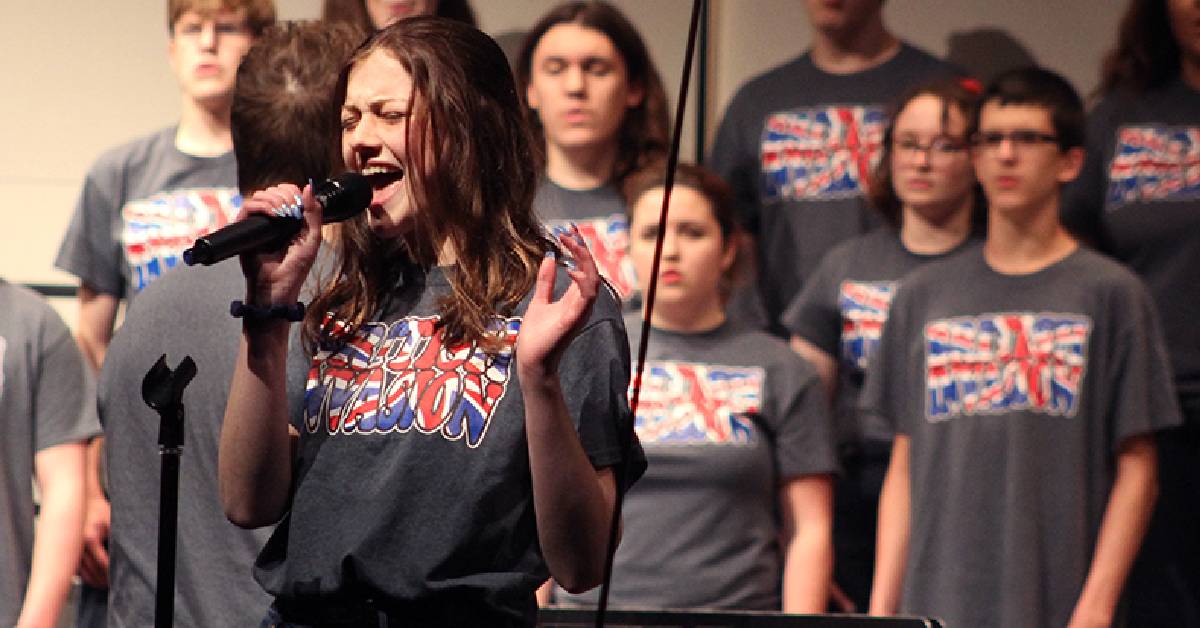 On Thursday, May 16, Lake Central Choir held their annual spring concert. This year’s theme was British Invasion and the concert was filled with all sorts of songs from British artists, such as The Beatles and Ed Sheeran.

“My favorite part of the choir concert was dancing on stage with all of my friends. It didn't matter what song it was because I was always surrounded by people that I have fun with every day,” junior Ava Solis, said.

The concert lasted about two and a half hours long and ended with everyone in the choir singing Wonderwall by Oasis as a tribute to the seniors graduating, as this is their last concert performing in front of their family and friends.

“Performing in front of family and friends is really different for me because I feel really different when it comes to my family. I feel like they're a little more intimidating because they're so close to me and so I feel like it's a bigger deal for me to impress them. My friends are always gonna support me and so it's always nice to have people I know I’m comfortable with,” junior Emily Soeka said.

Many people in the audience held a smile while singing along to the songs because most of them were classics, such as Crocodile Rock by Elton John and Wake Me Up Before You Go-Go by Wham!

“My favorite song to perform was definitely Wannabe by the Spice Girls. It was my favorite because I choreographed the dance with one of my good friends. I just remember when we were in the process of making it, we really wanted it to be a party and have fun because the song has so much character and it's universally loved. I feel like we had to give it as much justice as we could,” Solis said.

Spending your summer in a foreign country without your family might be scary to some, but for Joshua Chen, a junior at Lake Central High School, he took the opportunity right away, and now, his departure date is only a few weeks away.

“I’ve been to Taiwan several times in the past, but the last time I visited was in 2015. This is the first time I’m traveling by myself, so I am a little nervous for the trip,” Chen said.

Chen will be traveling to Taiwan this summer as a volunteer to teach English to elementary and middle school students through the Overseas Youth English Teaching Volunteer Service Program, which was created by the Overseas Community Affairs Council of Taiwan.

“I’m leaving at the end of June and coming back at the end of July. My sister did this program three years ago, and I’ve only heard good things from her about this experience. I’m actually very excited, more so than nervous, for the trip,” Chen said.

Each volunteer is assigned a school in different locations around the island where they live with a small group of other high school juniors for four weeks.

”I’m really looking forward to not only seeing how I can teach others, but also to bond with other people in an entirely new environment. I cannot wait to be in Taiwan and see the landmarks and city, enjoy the night markets, and spend a month eating Taiwanese food,” Chen said.

As the school year comes to an end, that only means one thing for seniors - graduation. On Sunday, June 2, the class of 2019 at Lake Central will finally have the moment they have been waiting for the past four years.

“I’m excited to graduate because I am excited to move on to college, but I’m just sad because I don’t want to move on and change my routine. I think the scariest thing of senior year so far has been having no idea how the rest of my life is going to go,” Stephanie Gustas, senior, said

There are special titles for the senior who are graduating with a certain GPA, as it is always an accomplishment to graduate at the top of your class.

Everyone has different plans for after high school, from college, to trade school, or even taking a gap year to focus on their self and plan out their future.

“I don’t know if all that work put in the last four years will be worth it. I know I’ve been told that my entire life, and I really hope it is worth it, but I don’t know anything about what’s going to happen to me. But I’m not nervous,” senior Salvatore Presta said

Almost every year, Mrs. Christina Schneider, who is a Spanish Teacher at Lake Central High School, takes very good advantage of her summer and travels to a different country. She has gotten the chance to see many parts of the world, which is a dream for many.

“I have traveled to England, Wales, Scotland, Ireland, Mexico, Costa Rica, Italy, Canada, Jamaica, Bahamas, Russia, Germany, Iceland, Denmark, and the United States, of course. This summer, I will be traveling to Spain,” Schneider said.

Whether on a cruise, traveling with her family, or just going by herself, Mrs. Schneider makes sure to emerge herself in the culture of the country she is visiting to express her love for traveling.

There is history being made all over the world every day. Getting the chance to see that history come to life and to visit historic landmarks in other countries is what makes up Mrs. Schneider’s favorite memories.

“Everything is an amazing memory – watching fireworks over Niagara Falls, kayaking in Costa Rica and watching the monkeys swing from tree to tree. We threw coins over our shoulders into the Trevi Fountain in Italy and also traveled through the United Kingdom, visiting castles that are 1,000 years old,” Schneider said.