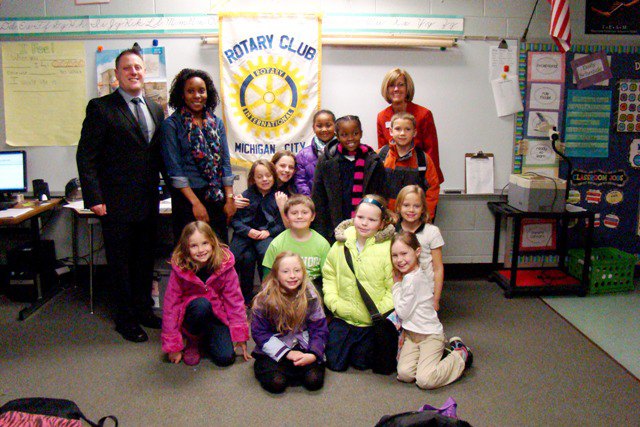 “The EarlyAct program was a perfect fit for our school because of its emphasis on service and character,” said Thomas. “We are excited to bring this to our students and are thrilled to be partnering with the Michigan City Rotary.”

The Edgewood EarlyAct chapter was formed as an outgrowth of the school’s student council, which is guided by teacher sponsors Olivia Evans and LaReina Valdez. Currently, the chapter has 20 members in grades 1-5, and it has held a number of fundraisers to benefit local charities.

Michigan City Rotary President Mike Hackett applauded Edgewood students at the December 5 meeting, noting that the goal of an EarlyAct Club is to create a self-sufficient Rotary Club within an elementary school.. “Establishing an EarlyAct chapter in Michigan City this year had been a top priority for us,” he said. “We are so pleased with all they have accomplished already, and look forward to a continuing relationship.”

Rotarians from Michigan City offer their support and resources to Edgewood’s EarlyAct chapter when needed, and at least one representative attends monthly after-school meetings.

Rotary member Bill Gertner, present at the December EarlyAct meeting at Edgewood, was impressed with the children’s efforts to raise funds for the Salvation Army and Toys for Tots. “One goal of Rotary International is to foster the idea of service over self for the younger generation,” he said.

In November, Edgewood’s EarlyAct chapter held a “Wee Care” fundraiser, which involved placing small piggy banks in each classroom and challenging students and staff to fill them with spare change. “Some classes filled those piggy banks three times over,” noted Gertner. The total raised topped $400, and was used by the Michigan City Rotary to purchase hams and turkeys for Thanksgiving meals provided by the Salvation Army.

Other recent EarlyAct fundraisers have included a canned food drive for the Salvation Army, in which one classroom alone has collected 86 cans, and a collection drive of over $300 for “Toys for Tots.” EarlyAct’s future plans include a clothing drive for those in need, a book collection drive, and a beach cleanup.