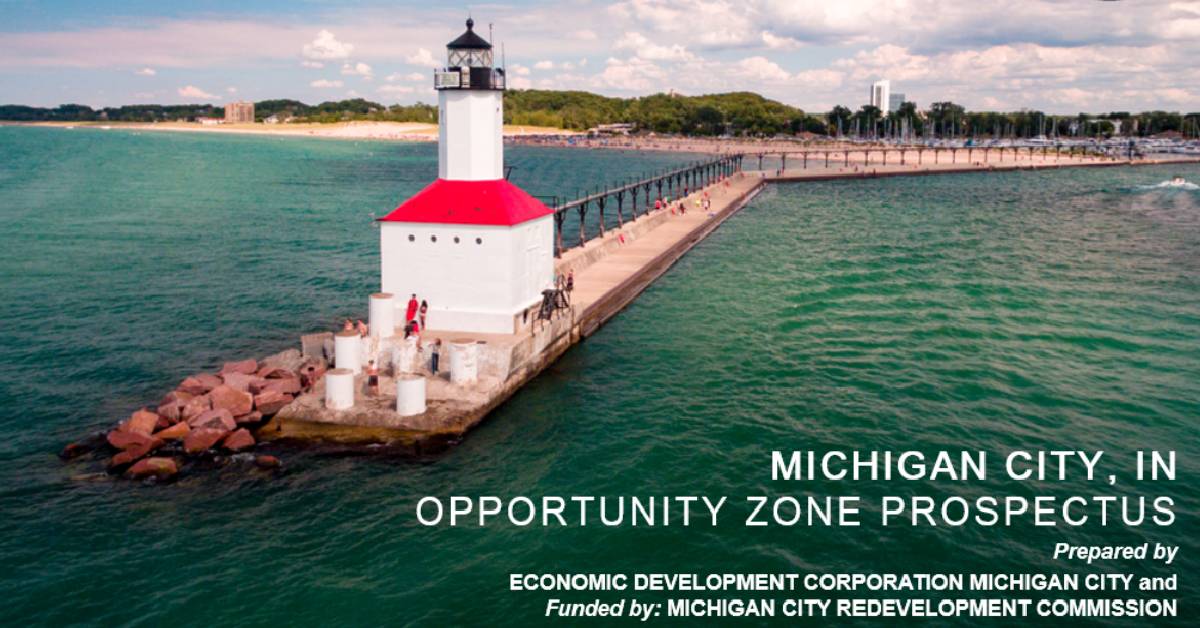 With funding from the Michigan City Redevelopment Commission, Economic Development Corporation Michigan City, Indiana (EDCMC) prepared and released Michigan City Opportunity Zone Prospectus, an investment guide that will be utilized to enable Michigan City to communicate its competitive advantages, trigger local partnerships and identify significant projects that are ready for the public, private and civic capital.

Opportunity Zones, introduced in the Tax Reform and Jobs Act of 2018, seek to encourage economic growth and investment in designated distressed communities by providing Federal income tax benefits to taxpayers who invest in business located within these zones.

Michigan City Mayor Ron Meer said, “This document showcases some of the best areas for capital investment in Michigan City and will attract business opportunities for our residents and more jobs to our community. It will also help to promote economic equity as we promote new development in underserved areas identified by the Federal Government.”

The Opportunity Zone Prospectus promotes the goals from EDCMC’s 2019-2023 Strategic Action Plan- An Agenda for Economic Prosperity - by showcasing and encouraging enhancements of Michigan City’s assets and amenities that creates the type of community where one can prosper socially, economically and personally.

EDCMC Executive Director Clarence Hulse said, “Michigan City has become a top tier city for economic investment and open to new business opportunities. The Opportunity Zone Prospectus invites potential investors and developers to see the vast potential that our city possesses, both now and in the near future.”

EDCMC is a private independent not-for-profit corporation, separate from the City of Michigan City. The EDCMC’s strategic initiative remains its own effort, working in conjunction with various city and community leaders and continually works toward the advancement of all Michigan City residents in the community and economic development arena. For more details on the Michigan City Opportunity Zone Prospectus, visit WWW.EDCMC.COM.