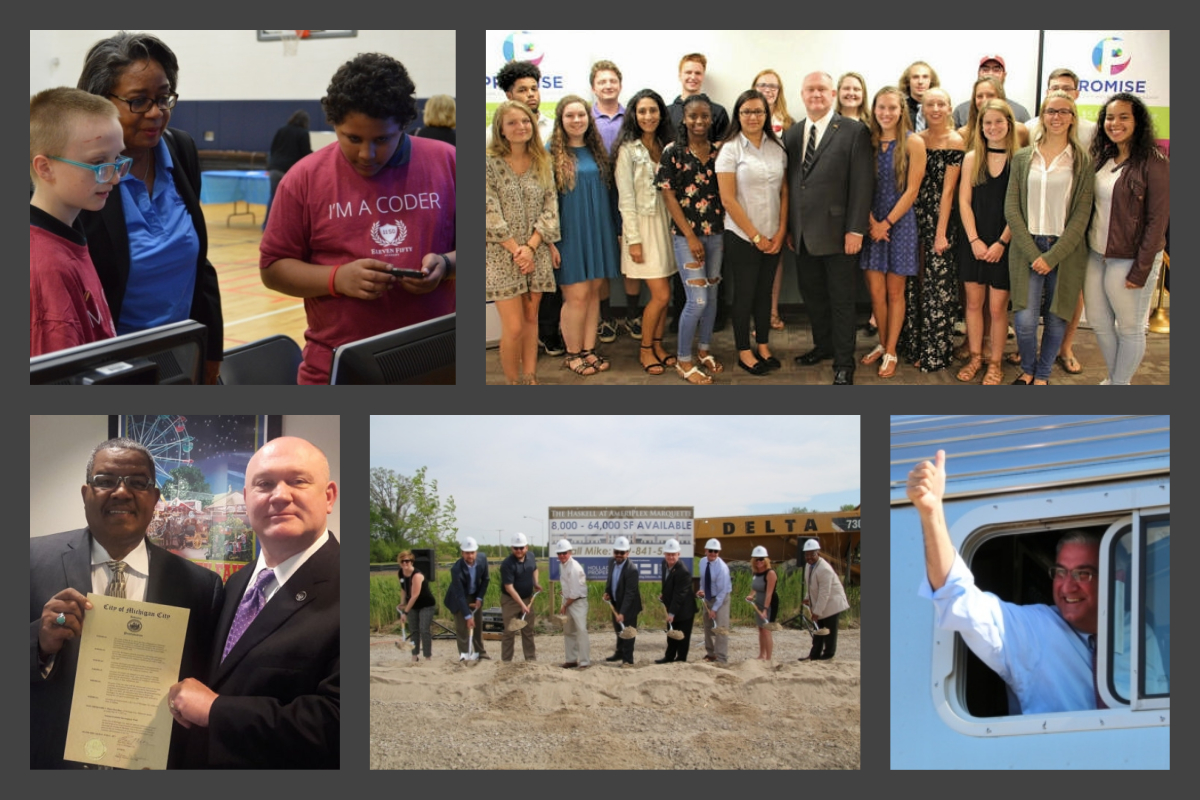 2017 has been a fantastic year for Michigan City and one that follows lockstep with the positive trends which have placed the city amongst the most attractive locations in Northwest Indiana to move your family or your business.

In working hard to attract both, the Economic Development Corporation of Michigan City (EDCMC) continuously drives economic development through business retention, expansion, attraction and development. These efforts have helped lead Michigan City towards a decrease in unemployment and an increase in new investment, development and expansions from existing businesses.

“We’ve been busy in Michigan City over the last few years and 2017 is no exception,” said EDCMC Executive Director, Clarence Hulse. “What we’ve seen is the culmination of a number of projects over the past several years coming to fruition.”

“We’ve recently had the most ribbon-cuttings and groundbreakings in Michigan City that I’ve seen since stepping into this position” Hulse added.

So far this year, the EDCMC has taken part in four new, expansion, or relocation projects that are now completed or in process, which will bring nearly 100 new jobs and total of over $6.4 million in investment to Michigan City.

“We’re working with a number of other projects as well that we’re hoping will come to fruition later this year or early next year,” continued Hulse. “We’re in such a great economic cycle right now in Michigan City as we look at retail projects, commercial projects, and industrial projects.”

“For anyone who wants move to the city, to find a job, invest in Michigan City, or start a business, this is probably one of the best times to be in Michigan City. The economy here is really booming.”

For Hulse, there is no one set pattern or order of operations that works to attract new development to the city and that means that getting to know who a company is, what that company needs, and how the EDCMC can help them achieve their goals is incredibly important.

“We’ve had some projects take three years and others take six months,” noted Hulse. “On any given week we probably have twenty different projects that we’re working on, whether they’re industrial or retail. A lot of time we’re answering questions regarding things like site selection and financing.”

“We receive a lot of requests for information and we respond to the ones that we believe are a good fit for Michigan City. When there is a strong interest in La Porte County and Michigan City, we work to impress upon them why they’ll want and need to be here.”

Much of what the EDCMC does is to work on building strong relationships across the region, the state and the country, and across all sectors of the economy as well. Providing businesses located in, or thinking of relocating to, Michigan City with contacts in industries like banking, real estate, investment, or engineering allow the EDCMC to identify a company’s need and connect them with the right resources.

Partnerships play a big part in the successes that Michigan City and the EDCMC have been experiencing over the last several years. Working together across all sectors to identify and meet the needs of everyone in the community, from a large manufacturer to a student gaining the skills they need to succeed after graduation, has already had an impact on the economic and social landscape in the city. The EDCMC is focused on building resources and programs that enhance the workforce in the Michigan City community.

“We have a great partnership with Michigan City Area Schools (MCAS) and, for a long time, that was our Achilles heel,” Hulse said. “Over the past seven years, with Dr. Eason-Watkins at the helm, there has been some significant changes in the school system. That’s been one of the biggest sells we have - a great school system that has come back strong.”

“We were at 60% graduation rate and we’re now at 85%. We partner with MCAS on the ‘Made in La Porte’ event, we held the ‘Coding Boot Camp’ earlier this year, and we partner with them to bring some kids to the International Manufacturing Technology Show in Chicago. The city has spent over $2 million on technology upgrades throughout the school system and to provide one-to-one tablets for students this year.”

One of the biggest developments that has taken place in the city over the last couple of years is the Promise Scholarship which is creating opportunities to help students afford higher education, and to also instill in them the value of getting involved in their community. The program also has a clear impact on making Michigan City attractive to new residents and companies looking to call the city home.

“With the introduction of the Promise Scholarship, 33 MCAS graduates received a scholarship from the city to help pay for their college education. That’s big for Michigan City! This program is a game changer for housing and, eventually, for economic development because we’re bringing people back to Michigan City, we’re gaining new residents, and we’re gaining new workers. This ties directly into providing quality employees for companies that are here or who are looking to relocate here.”

Hulse concluded by looking towards the future in saying, “We’re coming off of the Great Lakes Grand Prix boat races recently which pulled in thousands of visitors to Michigan City, including investors, brokers, and developers. We have gotten the chance to show people what’s going on around the city and spoken with them about investments in the Double-Track Project and the hotel/mixed use property being developed downtown. We’re getting a lot of attention from potential investors who are looking to invest across the city right now.”

“A lot of great things are under discussion and there are a lot of commercial and industrial projects in the pipeline. We are very excited about the future of economic development and the general overall economy in Michigan City.”

To find out more about the work that the Economic Development Corporation of Michigan City does and how they might help your business, visit: www.edcmc.com/