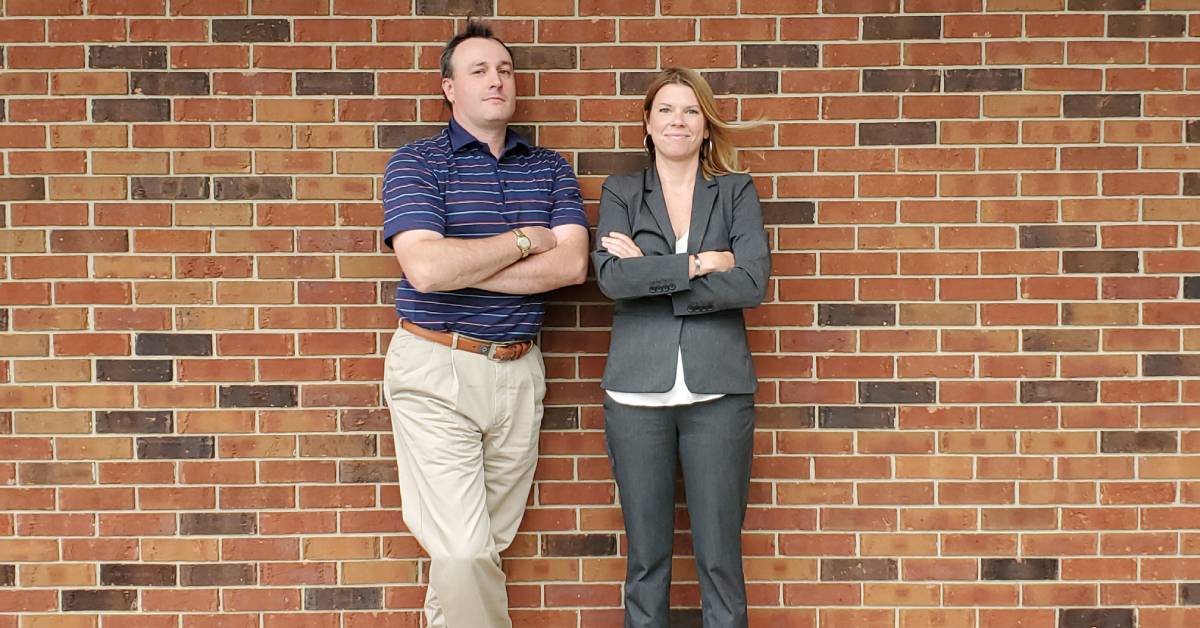 Rural communities have their charms, but they also have their challenges. As officials and community members in Pulaski County work through some of these, two individuals remain hyper-focused on shedding a positive light on the communities where they work, live, and play.

Nathan Origer, Executive Director of the Pulaski County Community Development Commission, and Krysten Hinkle, Project Coordinator there, share a compact office with not much room for anything but the essentials. On any given day, Origer is coordinating a workforce development project, handling county administrative business, or attending his 37th meeting of the month, while Hinkle is brainstorming a new tourism marketing strategy, envisioning how to add a little POP! to a blank brick wall or an underused parking lot, or guiding the local farmers’ market from non-existence to having two locations. It’s all helping to paint a picture of Pulaski County’s rural towns that most wouldn’t necessarily believe unless they saw it for themselves.

“I’m very focused on helping people understand how the quality of life in a community can impact the county’s economy,” Hinkle said. “It’s easy to see when you have 12,000 people floating down the Tippecanoe River every summer. What’s not so easy to see is how simply creating a new park in one of our towns makes it more attractive to prospective residents and encourages them to take a second glance at living here,” she said.

Pulaski County has its work cut out for it. Declining population numbers are working contrary to the direction a community needs to go to build its tax base and attract new business. But Hinkle doesn’t let that scare her. She said place making – the art of building thriving, sustainable communities where people want to live – is a big part of the answer.

“There’s a saying in place making – quicker, faster, cheaper. You don’t have to undertake a $1.5 million project to spur growth. You can paint a mural on a wall. You can host a dinner party in an alley. It could be something as simple as signage,” she said.

This sentiment is what drives Hinkle and Origer to team up on two very different jobs under one roof, offering exceptional benefits to the communities they serve. Nothing happens overnight. Incremental change is the norm.

One such change – which has been significantly successful as a grass-roots campaign to build community pride – is the Adopt-a-River project.

Hinkle handles much of the tourism promotion in the county since Pulaski County doesn’t have a separate tourism development commission. When their web development team surprised them with a promotional video featuring the county and all its beauty, they boiled it down into a commercial and ran it during the American Country Music Awards.

Anecdotally, they knew it worked because the phone was ringing with folks from Chicago who were very interested – albeit critical – of their pronunciation of the word “Pulaski.” (For the record – Chicagoans pronounce it Pulas-key and residents in the Indiana county pronounce it Pulask-eye. The jury is still out on who’s right).

Origer said Hinkle originally wanted to air the commercial during the Super Bowl, but that was obviously cost-prohibitive.

As the video did its magic, more people came to visit the county’s Tippecanoe River access points for outdoor recreation. The extra attention was making some residents nervous about environmental impact, among other factors.

“So we created the Adopt-a-River program and received this groundswell of support from community and business members who were really interested in keeping their river and community clean,” Hinkle said.

Origer – normally the administrative guy – was all in. When the signs arrived informing visitors to keep access points clean and respect the river environment, Origer found a post hole digger and installed them at each river access point. Trash cans were installed at each point, too, and clean-up days were organized by community committees to purge the river of existing debris – most of which had been the result of years of flooding damage or careless river-goers.

Origer inked an agreement with the town of Winamac to haul the trash from the various access points that were gathered during the initial river cleanup. The great thing about the Adopt-a-River program is that Pulaski County residents have volunteered for the ongoing cleanup, adopting various DNR access points, cleaning up the trash, and removing garbage from the trash receptacles. Sometimes, Origer and Hinkle are in that mix.

“She’s complained to me about having trash water in the bed of her pickup truck,” Origer laughed. “But it’s a small price to pay for something so successful. It went from a TV commercial to citizens giving up their Saturday to clean up their river. It speaks directly to the quality of life here,” he said.

Hinkle also backs up Origer on his economic development duties, at times filling in for him to represent the county at local or regional meetings when he can’t be in two places at once.

Origer said the company IBC Thermoplastics is in the early stages of opening shop southwest of Winamac at the old Anvil & Saw property on County Road 200 South thanks to a connection that Hinkle had from a former job in Logansport. She fed Origer the lead, and he took it from there.

On a day-to-day basis, Hinkle sings the praises of Pulaski County’s natural resources. She holds a master’s degree in public management from Indiana University Kokomo, and an undergrad in anthropology and natural resources with a minor in outdoor recreation. Her work, she says, reflects her educational background and love of community.

Before she was born, her dad – who grew up in Merrillville – went on a hunting trip to Pulaski County and ended up buying a house and raising his family there.

“That’s exactly what effective tourism does,” Hinkle said. “Any time someone visits, it’s a ‘first date.’ It’s an opportunity to showcase our quality of life, natural beauty, and affordable living that we hope will ultimately encourage them to stay, and later build our tax base, and help us grow our amenities,” she said.

Another important initiative is the Leadership Academy that Hinkle hopes will begin in the spring. She’s working with the Purdue Extension office to build a program that will inspire and educate anyone in the community to become advocates for their hometowns and strong community leaders.

“We need people to lead, run for office, get excited about running a business and volunteering,” she said. “But we need to provide the education and programming to make that happen.”

While Origer acknowledges that he and Hinkle have an enormous amount of work on their plates, and very different roles, he’s grateful for their tag-team approach whenever possible. Of course, the casual nature of their professional relationship helps.

“Neither of us is too uptight and we are OK with throwing things across the room at each other,” he said laughing, but not really joking. “Our communication is definitely frank and unfiltered. We don’t have to walk on eggshells in the office, and that helps us just get things done.”

“We balance each other out. I can often act as his translator or proof-reader, putting his complex ideas into laymen’s terms and helping to get a unified message out,” she said. “But it’s true – we are completely unfiltered. I can tune him out if necessary and he can do the same. It’s an excellent working relationship.”

To learn more about Origer’s and Hinkle’s work at the Pulaski County Community Development Commission, visit their latest achievements report here: http://development.pulaskionline.org/wp-content/uploads/sites/2/2019/09/Achievements-2018-2019.pdf Former reports and other valuable information about Pulaski County can be found here: http://development.pulaskionline.org/