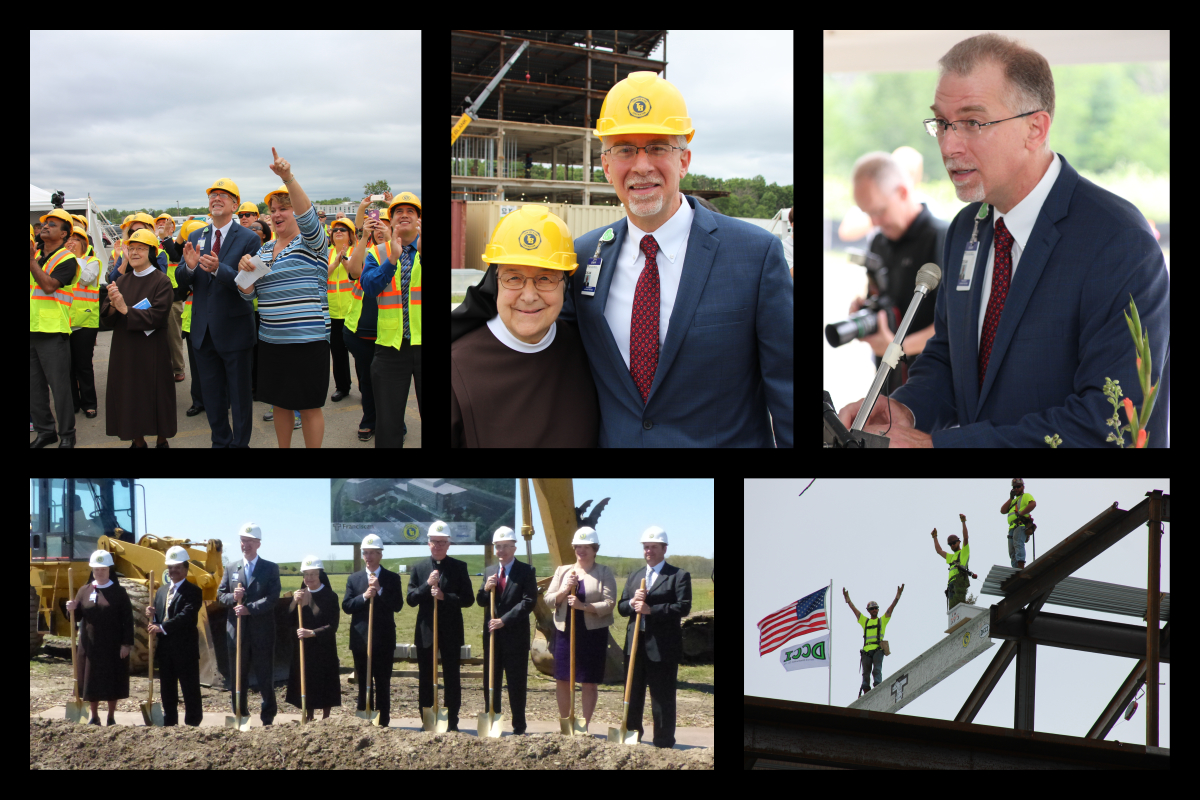 In January of 2016, Dean Mazzoni joined Franciscan Health - Michigan City as Chief Executive Officer. In that time, Mazzoni, who’s overseen the new, state-of-the-art Franciscan hospital project going in on the southside of the city, has sunk roots in La Porte County and become a welcomed member of the thriving Northwest Indiana and Franciscan Health communities.

Mazzoni, who has degrees from Johns Hopkins University and Rutgers University, was initially introduced to Northern Indiana while attending the University of Notre Dame, where he earned his M.B.A. in 2002. Before that, Mazzoni took his first job in the field of healthcare and found a passion for the dynamic industry.

“I got into healthcare in 1990, and my first job out of undergrad was working in a local community hospital,” Mazzoni said. “I got a job in an entry-level position as a central supply technician. Basically, what we did there was provide supplies to the hospital, and we were responsible for sterilizing and cleaning equipment for the operating rooms, instrumentation and that sort of thing.”

“It was just an entry-level role right out of college, and it really introduced me to healthcare,” he said. “I got the chance to see all the different aspects of the hospital from that position. I learned quite a bit about the different roles in healthcare, and the hospital in particular. That’s what directed me towards that career path. There are so many different ways to be involved. When people think about a hospital, they think about doctors and nurses, but it’s incredible - the different opportunities that are available to people.”

Over the years, he worked his way through advancing his education while taking on greater roles in healthcare. For Mazzoni, ultimately making the move from New Jersey to lead Franciscan Health - Michigan City was a big decision. While considering the move, he did some research on Franciscan Health.

“The values were what struck a chord with me,” Mazzoni said of his research on Franciscan and the area. “I realized early on that there was a match for me, personally, with the organization from a values perspective. That was very important. This is an organization that walks the walk, so to speak. Many organizations have their values or a mission statement up on the wall, but I’m proud to say and can attest to the fact that this organization lives those values every day. That was an important component for myself and my family when we made the decision to come out there.”

“We’re a faith-based organization. That’s also important because it’s part of our mission to provide care for everyone, but especially for the poor and most vulnerable among us. In healthcare, that has to be part and parcel with the work that we do, and it has to be important for us.”

Having attended Notre Dame, Mazzoni had previously visited Northwest Indiana and Michigan City, specifically, during his time in South Bend. That familiarity played a part in his decision to relocate in early 2016 from a leadership role in New Jersey to Franciscan Health in Indiana.

“It did have an influence,” Mazzoni said of the familiarity with the region. “My wife was with me, and I was a married graduate student pursuing my MBA at Notre Dame. We lived a couple years in South Bend, and we really loved it. In fact, we had the opportunity to travel to Michigan City on several occasions to visit the beach, and we really enjoyed the region a great deal. We knew when the opportunity presented itself that we would love to come back here and live here with our family.”

Mazzoni also spoke about the Northwest Indiana region in saying, “This region has so much to offer. It’s like the best kept secret when you look at all of the variety - the seasons, the access to big cities, the access to the lake, the rolling countryside, the quality of life, the cost of living - it’s just a very impressive place to live and work. We’re really happy to be here.”

Another factor that struck Mazzoni was the cooperation across region towns, cities and counties. “It speaks volumes about people here and their desire to grow and lead, not just the state but our country into the next century. You see levels of cooperation that you don’t see in other parts of the country, and I’ve been very impressed by that,” he added.

These days, the atmosphere in Michigan City is one filled with optimism and positivity towards the growth, development, and improvements that have taken place across nearly all sectors in recent years, including in terms of the economy, infrastructure and education.

“In Michigan City there’s a level of cooperation between city, business and community leaders that, as I understand it, has not existed before, and I think that really starting to show,” Mazzoni noted. “Mayor Meer, the City Council and city planners are doing a tremendous job. They’ve got an idea for this city, and they’re working together to implement it piece by piece with business and community leaders.”

“The school systems under Dr. (Barbara) Eason-Watkins, and the great strides that Michigan City Area Schools continue to make, are very impressive. That’s important to a community, and something like the Promise Scholarship is a terrific example of people coming together to promote education in Michigan City. There are just a lot of things lining up like Double-Tracking, which is more of a regional topic, but it’s a game changer for Michigan City.”

The new Franciscan Health St. Anthony Hospital being built on the southside of the city, at the intersection of Interstate 94 and U.S. 421, comes at the perfect time and is a continuation of the trends the city and the region have been experiencing over previous years.

“It’s a great time to be here, and our hospital project is just one of the many things happening that will position Michigan City for a very bright future,” said Mazzoni. Anytime you can have something as sizeable as a new hospital in a new community is a big plus. The new facility will have the latest and greatest technology, and we’ve incorporated into the design of this facility a consideration for patients and our staff in the way that they work. We’ve tried to optimize flow so that patients can wait less and they have access care that they need, both as inpatients and outpatients.”

The new Franciscan Health - St. Anthony Hospital is designed so that care is maximized and convenience was given the utmost consideration. With the design, it was decided to not build an impressive lobby and Mazzoni touched on the reasons behind that decision.

“We really wanted to focus on those critical areas where we’re providing patient care, and that’s where most of our investment is on this facility. The latest and greatest in architectural design for health care is incorporated, and you have to look at and consider the location. Being at the corner of I-94 and Hwy. 421 not only improves visibility to the community and the region, but greatly improves access from several major thoroughfares. It’s a greeting to people coming to the city for the first time or visiting again. We’re really, really excited about, not only the facility and what it means, but that location and what it’s going to look like when it’s finished.”

Mazzoni, at a recent special Topping-Off Ceremony, mentioned that construction has been going great and that the skilled laborers have been doing a phenomenal job building the facility and maintaining a safe worksite. They’ve also been lucky to enjoy great weather during the project. All these factors have come together to mean that the project is ahead of schedule in many regards, and Mazzoni and Franciscan Health will be looking towards the fall of 2018 to be open for business.

To stay up-to-date on the news of all things Franciscan Health - Michigan City, click here!