What could be better than a relaxing drive through the country in a new car? How about a test drive in a new car that helps raise money for your local school! Currie Ford of Valparaiso, Union Township Middle School, and Wheeler High School teamed up and welcomed community members to do just that at Ford’s Drive 4 UR School Program.

Ford’s Drive 4 UR School program began in 2007 as a way for Ford to give back to communities across the country. The idea was simple: test-drive a Ford vehicle from a local dealership, get money for your school. Since its beginning, the program has seen over $35 million in donations to schools across the country. Today, it was Valparaiso’s turn, as Currie Motors partnered up with Union Township Middle School and Wheeler High School to bring the program to Porter County.

“The school reached out to us,” said Shannon Jamieson, Administrative Assistant and Events Coordinator for Currie Motors Ford of Valparaiso. “This is a huge program put on by Ford, so a lot of schools across the country know about it. As a fairly new dealership to the area, I literally had schools from all around the area calling us about it. We just took the first two that called and set things up.”

Jamieson and the dealership hopes the event will bring in 150-200 drives. She says that the program is an easy and simple one, but has a lasting impact on local schools.

“Schools are getting less and less money from the state,” Jamieson explained. “They’re struggling to buy school supplies, computers, sports equipment. Doing this, setting this up, it’s easy for us. This is what we do, and this event gives us a chance to do what we are good at and help the school at the same time.”

For each valid driver over the age of 18 who comes out to the Drive 4UR School program and drives a new car, Ford will donate $20 to the designated school. Currie Ford of Valpo brought a variety of cars out for people to test drive, including a Mustang GT convertible, a Mustang coupe with Ford’s EcoBoost V6, a Ford Fusion Hybrid, Flex and even a new Ford Escape, for the SUV-lovers.

“I’d say so far though, that the Mustang convertible has been the most popular,” laughed Jamieson. “Hands down.”

Ha Khong, Events Coordinator for Currie Motors, says that she’s happy to be able to help support the community.

“We have been blessed to be very successful since we opened the store in October of 2015,” said Khong. “Our first priority was to get involved with the community, the schools and park districts. We do this event twice a year, once in the spring and again in the fall. Our last one was at Boone Grove earlier this year. We’re not here to sell cars - we are here just to support the schools and be active in the community.”

“Cars aren’t just cars anymore; they’re more like computers on wheels. People like to come out, see how the new technology works, go for a quick drive and feel how powerful these engines have gotten. These are some powerful engines in these cars!”

Dion Trinidad, a Wheeler native who recently retired from the Air Force stopped by to check out - of course - the Mustang GT.

“We saw the sign a couple weeks ago when we came out to sign my son up for school here,” said Trinidad. “They asked us if we’d like to come out and help support the school and we said, ‘absolutely!’ and here we are.”

Trinidad says he was happy to help raise money for his son’s school, and really enjoyed the power and handling of the Mustang.

“Man, I really like the way that car handled going through those cones, and we’re just really happy to be able to come out here and help the schools,” said Trinidad.

For more information about Currie Motors Ford of Valparaiso, go to www.fordofvalpo.com. 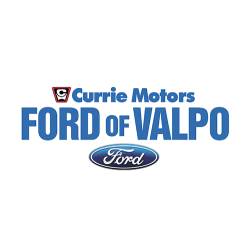