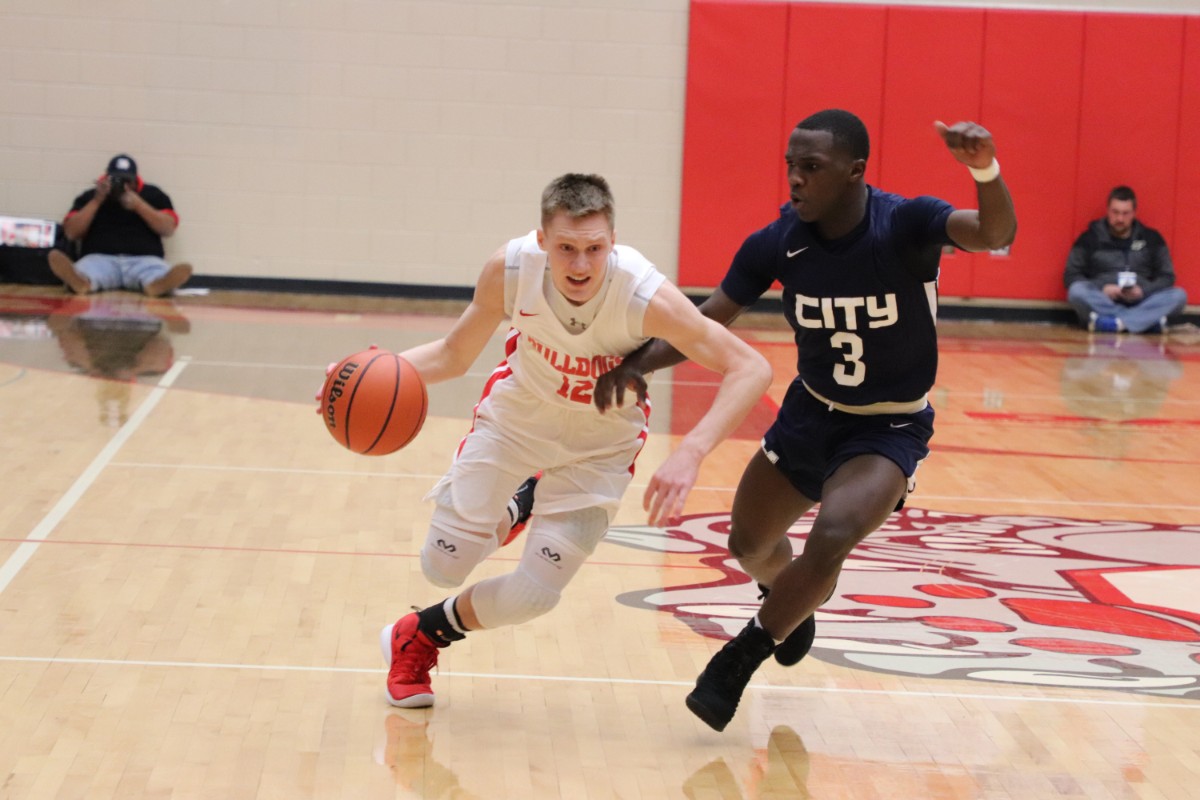 The Crown Point Bulldogs and Michigan City Wolves boys and girls basketball teams clashed on Friday night during a rare varsity doubleheader. Under the eyes of a full house, both the Bulldog teams came out on top against strong City teams.

The Lady Bulldogs and Lady Wolves kicked things off. Both teams are powerhouses in the Region, with the Crown Point team boasting a 16-0 record heading into the evening. City, themselves having a fantastic 12-3 season, gave the Dogs the toughest match of their season, even preventing the Crown Point girls from putting any points on the board during the entire second quarter.

“I give Michigan City a lot of credit, I don’t know how many blocked shots they had but it had to be in double digits for sure,” said Chris Seibert, Lady Bulldogs Head Coach. “So much of what we do offensively is predicated on our defense, and with us not being able to score we couldn’t set up the press. Michigan City is just such a tough matchup, they have that size and their guards did a really nice job handling pressure, so give them all the credit in the world. It was a gutsy performance from our kids to find a way to get a win in that situation.”

Momentum started to shift in Crown Point’s favor following a fantastic three-pointer by Ellie VanDeel, a senior guard. Her strong play helped the Dogs finally start pulling ahead and gave room for their freshman phenom Jessica Carrothers to score 24 points in the 51-47 win. The season is beginning to wind-down as potential for a playoff run looms, but the Crown Point girls are trying to stay grounded and focus on winning one game at a time.

“I really think that shot pushed our momentum forward, it got us pumped up and hyped and we all started making our shots,” VanDeel said. “Honestly it’s just our heart. We just care about the game so much that we don’t want to lose, and take everything we’ve got to get better.”

The boys had a tough act to follow after the electric play put on by the ladies. The Bulldogs met the challenge by defeating the Wolves 70-46 in a game where almost everything seemed to go right for the Crown Point boys.

The Dogs took an early lead, hitting double-digit point totals without much of a response from the Wolves. City eventually started to rally, but never quite managed to catch the Bulldogs who seemed almost incapable of missing their shots.

“We’re a tough team. We aren’t too oversized, it’s just some 6’3 guys that come to play tough,” said Sam Snodgrass, a senior guard who put up 19 points, 5 rebounds, and 3 assists. “We set the tone tonight. Michigan City is a very good team, and they’re having a great year but we came out and set the tone. That’s what gave us the advantage.”

The win makes the Bulldogs 6-4 on the season, while Michigan City moves to 7-5. The Wolves might have taken a loss tonight, but are still in the playoff hunt and Head Coach John Boyd is confident that his young team will learn a lot from the experience.

“We’re going to continue to get better, but they have to go through this. This is the Duneland Conference, it’s one of the top conferences in the state of Indiana,” Boyd said. “With Crown Point, you saw a team that was blowing by my guys. That was passion. That was energy. That was effort and belief in what they’re capable of. When you put young players out on the floor, they don’t always understand what they have to do. When they get it, they’ll be much better, but right now these are the things you have to go through as a coach of the Michigan City Wolves.”