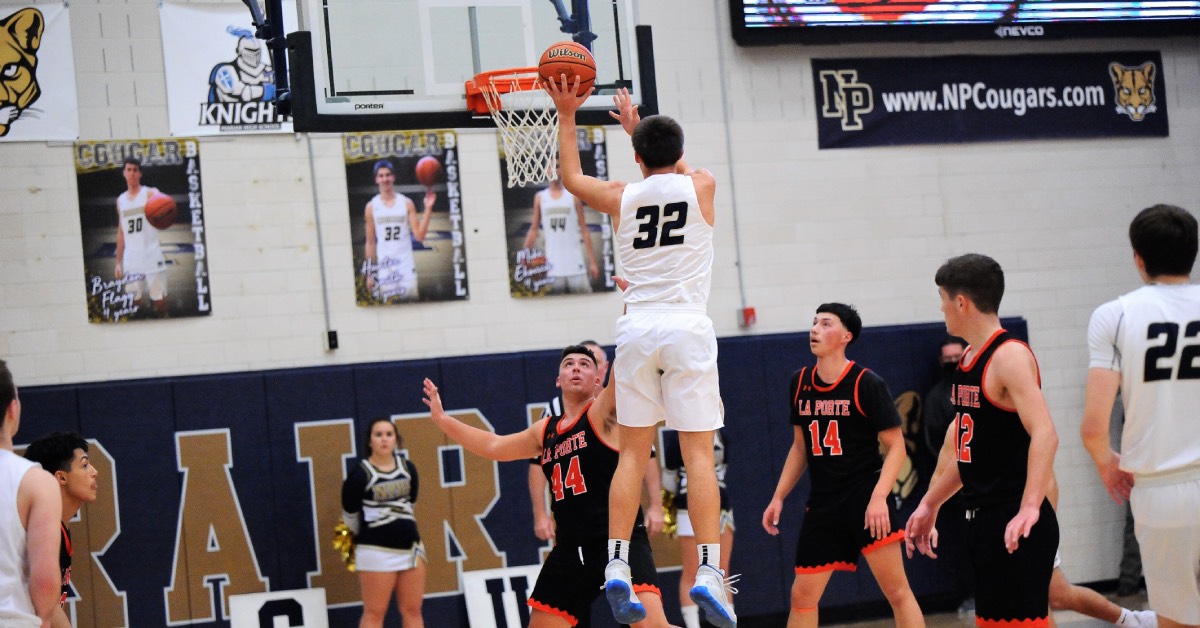 Varsity basketball is a difficult thing, even during the best of times. To be able to play competitive basketball during a pandemic is something else entirely. In a season plagued by cancelled games, postponed matches,shortened time to play, or even having the whole athletic season cancelled, just being able to play at all is quite an achievement.

The La Porte Slicers (0-2) gave their best effort in an away game tonight against their hosts, the New Prairie Cougars. The Slicer’s #14 Zackery Bragg put the first points on the board with a 2-pointfield goal, which was answered quickly by a matching 2-pointfield goal from New Prairie, thanks to #11 Grady Lapczynski. This led to a hotly contested match, with the Cougars (3-0) jumping out to an early lead of 25-14 in the first quarter.

The Slicers battled back during the secondquarter, rallying behind the efforts of Bragg and also 6’3” guard RJ Anglin, and took the quarter by a narrow 23-19 margin, leading up to a score of 44-37 at the break.

La Porte’smomentum was offset in the third quarter by a dominant showing on behalf of the Cougars, who racked up another 22 points while holding the Slicers to just 8 points in the period. Some standout plays were executed by#11 Grady Lapczynski and #22 Rylan McBride with a series of strong field goals.

The Slicers surged again in the fourth quarter, managing to tie the Cougars’ efforts for that period at an even 13-13, but in the end, that was not enough to overcome the overall strong showing by New Prairie.

The Slicers will be looking forward to hosting the Culver Academy Eagles (0-0) next week, while the Cougars will be hitting the road for a conference game against the Penn Kingsmen, currently 0-1 for their season.