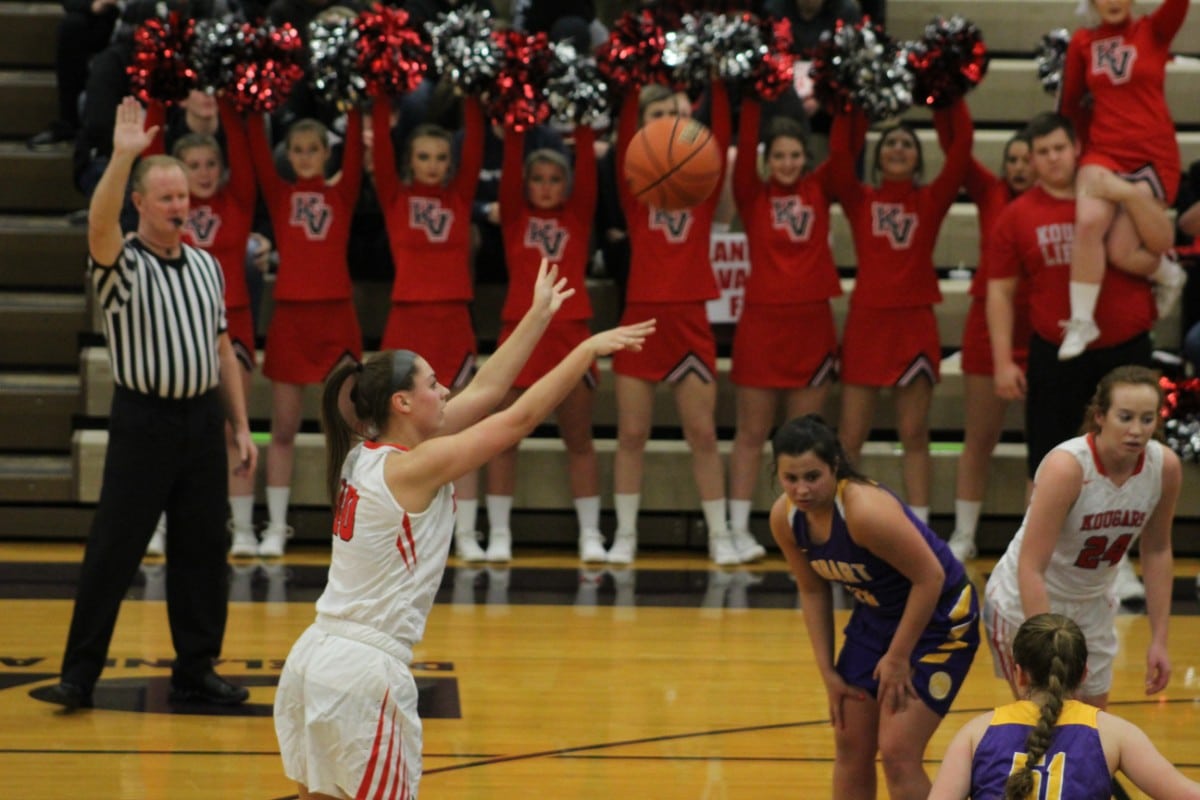 Inside the Merrillville High School gymnasium on Saturday evening, hundreds of fans were showing support for four teams—Hobart, Kankakee Valley, Michigan City, and Portage—at the annual IHSAA Girls Basketball Sectionals. The gym was so loud with cheers and excitement that many people ended up popping their ears when they left.

Two games were played on Saturday night, beginning with the rivalry between the Hobart Brickies and Kankakee Valley Kougars, and ending with the Michigan City Wolves against the Portage Indians. The winning teams from Saturday would go on to the Sectionals championship game on Monday night at Merrillville High School.

Click Here for More Photos from the Kougars and Brickies Game

Click Here for More Photos from the Indians and Wolves Game

The first game of the evening was between the Brickies and Kougars, with the Kougars coming out on top with a score of 74-39. The Brickies had ended their regular season before sectionals with a 3-19 record, while the Kougars ended theirs with an 18-4 record. Aside from the score on the scoreboard or any season records, both teams played their hearts out and left everything on the court. With a total of nine seniors from both teams, each player played hard knowing that it may be the end of their high school basketball career for their seniors. Although Hobart fell short to the Kougars on Saturday, the fans still showed continued support they have had all season for the girls as if they had won the championship game.

“I am so proud of these girls for all of their hard work on and off the court,” said long-time Hobart fan and previous Hobart High School student, Donnie Baker. “I remember playing basketball in my day and it was so exciting and fun. It is always tough to lose, but it just shows that there is still some work that needs to get done for next season and I think that is something fun to always look forward to.”

The second game on Saturday was between the Michigan City Wolves and Portage Indians. The game was an absolute nailbiter until the closing minutes of the game. At halftime, Portage was leading the Wolves by 1 point with a score of 30-29, but after Wolves Head Coach Mike Megyese took the team into the locker room, the Wolves came out with new found energy to win the game 73-56. The Indians ended their entire season with a 12-14 record, while the Wolves are continuing on with a stunning 22-4 record. During the entire game, each team went back and forth scoring one point after another. The cheerleaders for both teams held a great part in keeping the crowd energized. In the end, people left the gym having to pop their ears due to the amount of noise. Both teams were, once again, generously represented by all of the fans cheering them on from the stands.

“My ears are ringing because it was so fun and loud in the gym,” yelled Portage native fan, Marcus White. “This nice non-snowy weather is a blessing and it also a blessing to see the girls on the team hold their heads up high after losing that tough game. I am very glad that I saw smiles on some of the girls' faces because they should be proud of everything they have accomplished this season.”

Supportive fans made Saturday night fun and exciting for the players and coaches on the court. Every player played their hardest and left with their heads held high for what they had accomplished. On Monday night, the Michigan City Wolves will play against the Kankakee Valley Kougars in the championship game at Merrillville High School.