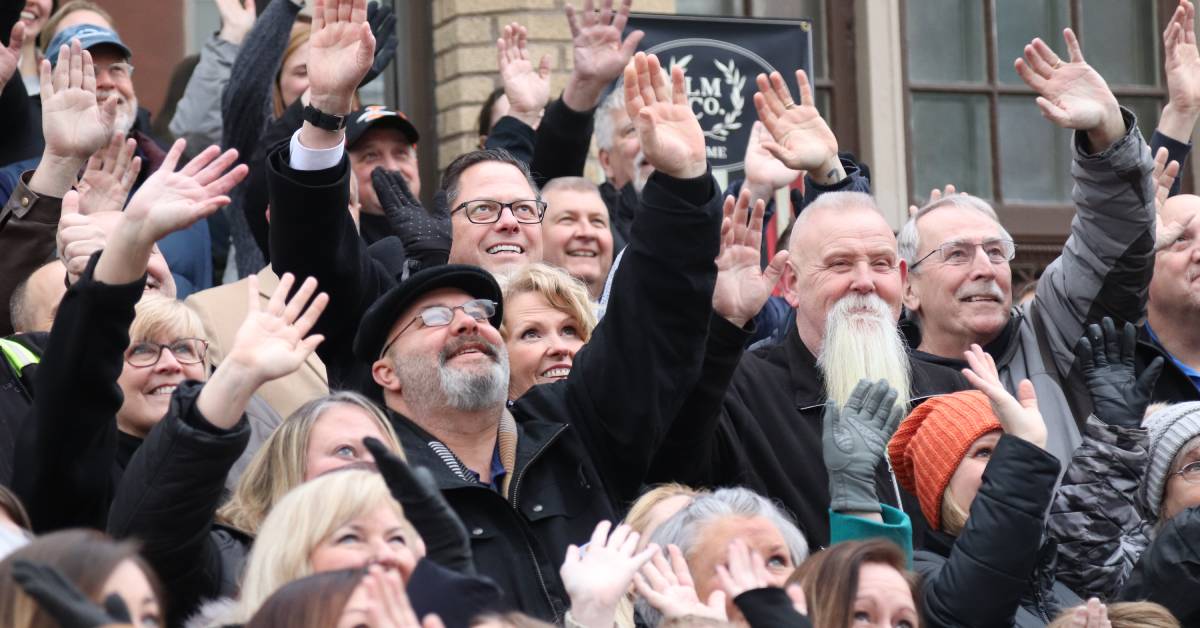 The Maple City is making a bid for some HGTV love, and probably the best question about the whole project would be, “Why not?”

More than 100 people convened on La Porte City Hall steps Tuesday afternoon to show their hometown pride and prepare for the City of La Porte’s bid to be considered for a new HGTV limited series called Home Town Takeover – the birth child of famed renovation personalities Erin and Ben Napier, who plan to lead a team of renovation pros as they take over an entire small town.

The Tuesday meetup was just one small part of the city’s application to be considered for the show, which put out a public call for submissions to towns under 40,000 population. Citizens, babies, city and county officials, and even a fluffy puppy gathered for this portion of their video application, made possible thanks to time donated by Duneland Media.

“This is just a fantastic turnout and we can’t thank everyone enough for coming out to spend a few minutes with us today to celebrate how we are La Porte Proud,” La Porte Mayor Tom Dermody said. “I’ve said from day one – we can compete with anybody, and this turnout just goes to show you that. We would be honored to have an opportunity to work with HGTV.”

If chosen for the series, the City of La Porte can expect to witness the rehab of multiple individual family homes, as well as the revitalization of public spaces such as parks, local diners and restaurants, and outdoor recreation areas.

Just a short week and a half ago, a La Porte citizen saw the national callout and mentioned the opportunity to Dermody.

“This is a wonderful idea on the part of HGTV, and I have real hope that we would be considered for it. The Dermodys are all about packing places with people, so regardless of the outcome, we want to thank HGTV for the opportunity to bring our community together for this.”

With the help of Duneland Media, Jackie Dermody and others began planning the project that will serve as their application, and while they aren’t revealing too much about the final product (due Feb. 4 to HGTV), they’re excited to reveal it to the community when it’s ready.

“I think this is a great opportunity for the City, and it will also bring awareness about La Porte, which is always a good thing,” said Tim Franke, a La Porte city council person and co-owner with Adam Konieczny of Duneland Media.

Others stepped away from their desks or the warmth of their homes to gather with fellow citizens just because they’re proud of their hometown.

“It’s great to be here, and I’m all about trying to improve our town. I was raised here and have lived here all my life, and want to see life continue to get better for everyone,” said Chad Querry, a professional painter and drywaller who has also worked on downtown beautification projects for the city over the last four of years.

“We’ve been able to paint the facades of more than 20 buildings so far,” he said. “I’m La Porte Proud for sure.”

Tom Giglio, who is retired, moved to La Porte four years ago from the Chicago area but grew up visiting his grandparents’ La Porte lake house, which had been in the family for 70 some years.

“La Porte is going in the right direction. We have the best leadership in a five-county radius. There is a lot of history here in La Porte, and with our seven lakes and other natural resources, it’s just a really fun place to be,” he said.

Sharon Miles, a 26-year La Porte resident, and Tammy Glauser, a 13-year resident, both were excited to participate in the video project, despite the chilly temps.

“Being a part of the downtown community, and just getting involved – I think it’s an exciting thing to do and I think we have a shot,” Miles said.

“I would love an opportunity to have HGTV work on my home, but either way, it’s nice to see so many people out here,” Glauser said.

To stay connected with the project, follow the City of La Porte on Facebook, and look for the final HGTV Home Town Takeover project submission there.