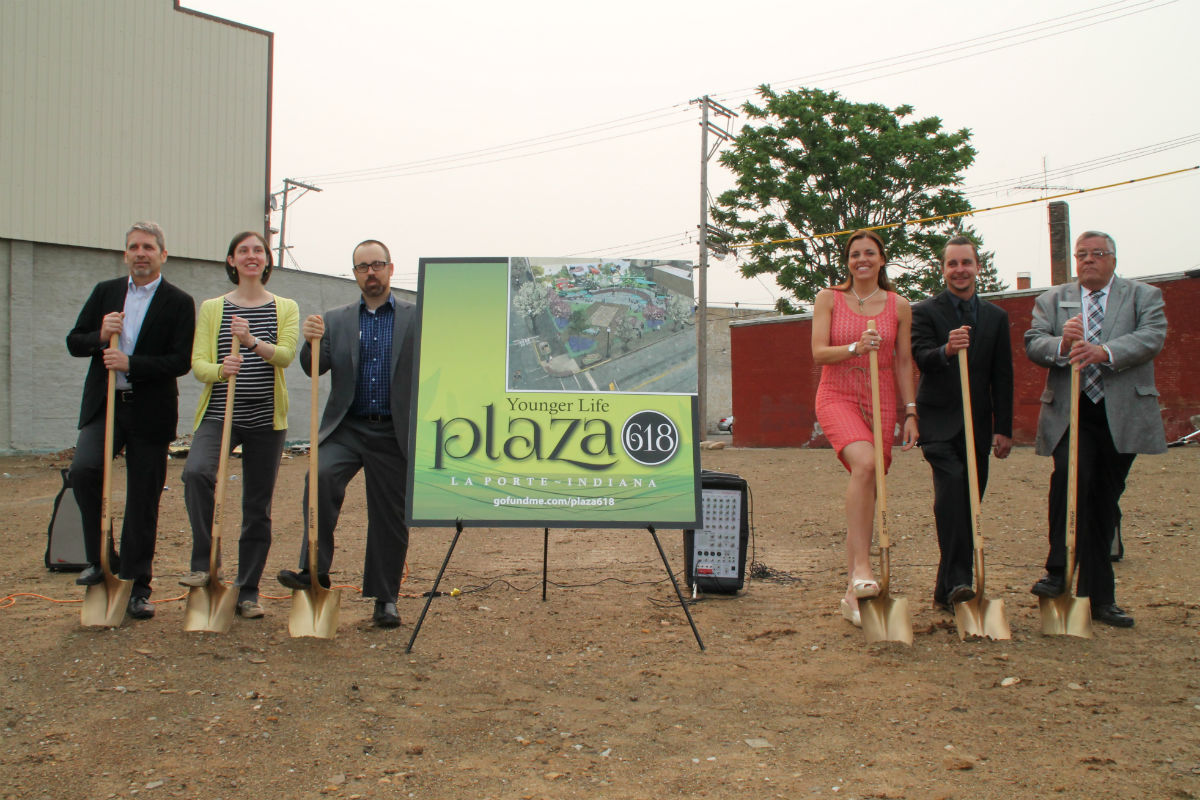 To see more photos from the event, click here!

“The creation of this location was made with through a formed task force composed of City of La Porte employees, Downtown La Porte Main Street Association members, Business Improvement District representatives, Redevelopment Comission members and community stake holders,” said Executive Director of the Greater La Porte Economic Development Corporation Bert Cook. “It was a clear vision of what we wanted from the beginning, a centralized outdoor location for everyone in La Porte to enjoy.”

Younger Life Plaza 618 is located at 618 Lincolnway, a location previously owned by the older Woolworths and Michael's Furniture Store. Due to age and outside conditions, the building fell into a state of decrepitude which made it unsafe to be sold and too costly to fix.

“It came to a point that I couldn't even bring people inside the building due to safety issues,” said Cook. “Fixing it up was also out of the question as the cost to completely renovate the building and make it safe again far outweighed the acceptable cost.”

Through planning and brainstorming with the city's task force, plans were eventually developed to tear down the building and turn the area into something that the entire town could benefit from. After the building was identified by the task force and the project initiated by the Redevelopment Comission, The La Porte Urban Enterprise Association donated a sizable contribution to assist with demolition and initial construction of the plaza.

“The building was in such a prime location in our downtown and also being near Lincolnway and Monroe Street. It was also nearby our main street which features famous restaurants like Mucho Mas,” says Cook. Before there were times that these places simply couldn't accommodate the amount of people that wanted to have access to these locations. Now that the plaza is being established, people can have a nice area to sit down and have downtown restaurants take out food to them.”

"I'm very excited to see what this plaza can bring to downtown businesses," said Adam Wilson of Wilson's Barbershop. "There's more people in downtown that will take advantage of this area. There currently are not a lot of people who use this downtown area but this has the ability to change that."

“We designed the plaza to be completely modular. It's fit to host a wide variety of events and accommodate a wide variety of needs that people may want to do here,” says Cook. “Its also worth noting that the plaza and the equipment here is able to be moved and transported easily. There may come a time where a bigger, more accommodating location may become available and if that happens, we're ready to move everything there without the need to repurchase or rebuild.”

"We really set out to think of the future and plan ahead when designing this plaza," said La Porte Mayor Blair Milo "It's a project that is designed to last far into the future."

This future-minded thinking accentuates the meticulous planning and foresight the task force considered when designing the plaza. It's a location that not only intends to serve the people of La Porte, but to grow and evolve with the city as well.

Project funding has come from a mix of corporate sponsors, the La Porte Urban Enterprise Association and the general public. 65% of the funding has already been raised for construction, with the rest of the funding to be completed with a public funding drive. A large donation was also provided Indiana University Health La Porte Hospital through CEO Thor Thordarson.

"We're looking to make La Porte a very healthy city to live in, we have a long-term vision of this healthy future and this location will help the people of La Porte achieve that," said Thordarson.

Cook expressed his excitement and optimism at the opening of the Younger Life 618 Plaza, noting that its similarity to other projects developing in Northwest Indiana is a sign of progress for La Porte and the region.

“I think it's a great sign were able to undertake this project. It's worked well for other cities in Northwest Indiana and I think it represents the region's ability to grow and adapt to its citizens,” says Cook. “Places to shop like shopping malls are now becoming a thing of the past. People are much more active and wanting to get out and quickly walk around for what they need. Smart cities don't lament the past, but instead push forward to embrace the future and that is exactly what this plaza is doing."