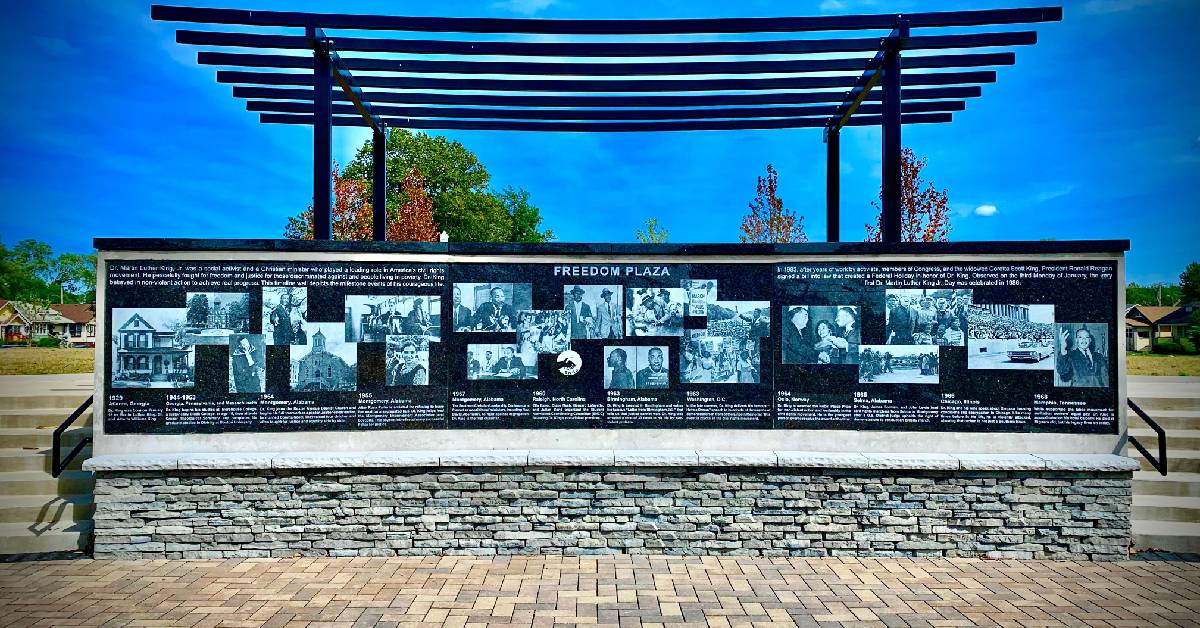 This July, the City of Hammond officially celebrates the completion of the updates to Martin Luther King Jr. Park, a project nearly two years in the making. Though the park was originally named in honor of Dr. King, some years ago it became known as Maywood Park before coming full circle and maintaining its current name.

In bringing the new design to life, Matthew Marcum, Recreational Facilities Operations Manager for City of Hammond Parks and Recreation, said the goal was to bring more recognition to the man behind its name, as well as the legacy he has left.

“We thought, if we’re going to name this park after Dr. Martin Luther King Jr., we should feature him in a grander format that really recognizes him,” he explained. “In the original park there was only a single plaque meant to recognize him. Since Dr. King is a national hero, Mayor Thomas McDermott wanted a more prominent presence created in his honor. With this goal in mind, we created the Freedom Plaza in recognition of Dr. King.”

The plaza features an eternal flame, custom designed by engineers, that continuously burns in memory of Dr. King and his legacy, as well as a memorial wall with available seating featuring some of Dr. King’s quotes, sayings, and pictures. The park was partially funded by the Hammond Ministerial Alliance.

“The eternal flame is incredible, and to me it’s really the centerpiece of it all,” Marcum said. “You can see it from far away even during the day, and when night falls you can really appreciate its effect.”

The memorial serves as a focal point for the park, and is located at the park’s center while all available activities and equipment surround it. The park spans a total of 17 acres and features two full-size basketball courts, two half-sized basketball courts, a picnic shelter, a playground area, restrooms, interactive basketball hoop tree, outdoor fitness equipment, and a paved pathway that furthers the MLK Jr. tribute.

“The pathway is about a quarter mile loop and features mile markers that each have a quote from MLK Jr. inscribed on them,” Marcum said. “It’s almost like a small interactive museum exhibit. We wanted to encourage people to be active while also drawing attention to Martin Luther King Jr.’s lasting impact.”

MLK Jr. Park also features a splashpad, one of its most popular attractions, complete with a flowing river and waterfall grotto.

“The splashpad is very popular with the young kids, and it’s great to see them get so much enjoyment out of it,” Marcum said. “It’s interactive, modern, and zero depth so it’s very safe.”

“We encourage the community to come out and to take pride in MLK Jr. Park, and in all of our Hammond parks,” Marcum continued. “We are a leader in parks in Northwest Indiana, and we’d like to maintain that reputation by continuing to provide great areas for our residents to enjoy.”

Hammond Parks and Recreation is proud to maintain a high standard for their community parks, and encourages community members to do their part with community programs like spring cleanings and anti-littering campaigns.

“We encourage people to enjoy the parks and help take care of them as best they can,” Marcum said. “It’s not just their park or the city’s park, it’s everyone’s park, and whether you’re a Hammond resident or live elsewhere, we want our parks to be enjoyed by all.”

To learn more about Hammond Parks and Recreation visit http://www.gohammond.com/departments/parks-and-recreation/