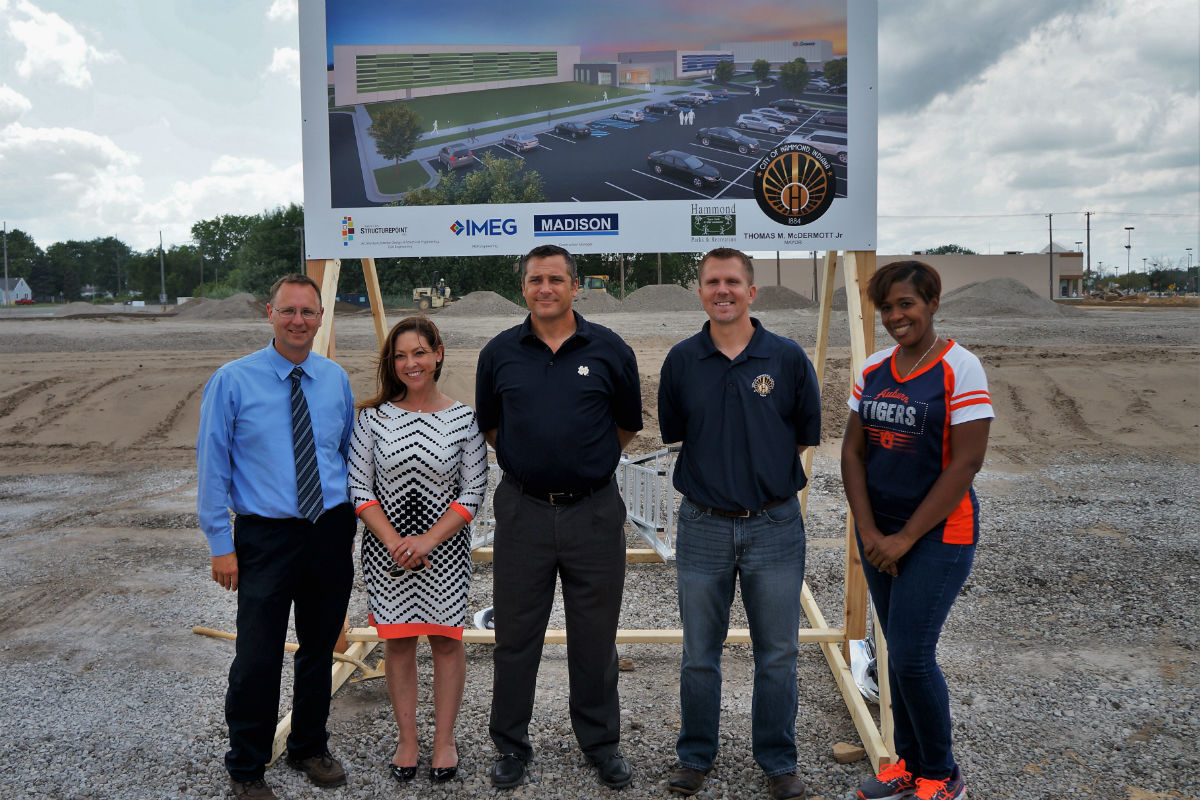 Hammond city officials, along with representatives for architectural, construction and engineering companies met today at the former site of Woodmar Mall at the corner of 165th and Indianapolis Boulevard to break ground for a new, state-of-the-art sports complex and community center. The project is the culmination of well over a year of planning and development, in hopes to revitalize the Indianapolis corridor and bring new life to the region.

The site has remained largely empty since 2006, when Woodmar Mall was demolished, leaving nothing but retailer Carson’s Department Store as a reminder of the former retail hotspot.

Taillon says that the center will be used for a variety of purposes beyond sports tournaments.

“The thought behind this project has always been more than just a sports venue. Although we hope that it will bring larger tournaments here to the city, which will increase tourism to the area, we also think that during the week this will be used a a community center. Local teams and organizations will come here to use this space. It will be a destination for locals can come, see some fun and participate in activities here.”

Taillon says that, according to projections, the Sportsplex could potentially bring between $250,000 - $300,000 in additional annual revenue to the area.

“This is going to draw teams from all over the country, along with their families, to our area. They are going to come here, eat at local restaurants, stay in local hotels,” said Taillon. “This is going to be a tremendous boost to our local economy.”

The 135,000 square-foot complex will feature six basketball courts, 12 volleyball courts, two regulation-sized indoor soccer fields, six indoor batting cages and an upper level track that could be used for running and walking, as well as for observation of sporting events taking place on the lower level. The facility also will offer a community room to host city events, a concession area, general offices, and restrooms/changing rooms.

Africa Tarver, Executive Director of Planning and Development for the City of Hammond, is confident of the positive impact that the project will ultimately have.

“Mayor McDermott is a big advocate for sports and youth programs, as demonstrated with the College Bound program,” said Tarver. ”We wanted to improve the quality of life within the community, so we had always considered something like a large sports complex. Once Woodmar Mall closed, that gave us a large parcel of land to build on and make this happen, right here in the center of the city. This will be a large, economic engine which will bring more businesses here to the area.”

Tarver feels that the sports complex is a good fit for the area and complements the many local college-level and college-prep sports programs.

“We have a large number of institutions here in the area - Purdue, IUN, Calumet College of St Joseph and others. Now, with this facility right here in our backyard, it will be a great opportunity to bring competitions right here to Northwest Indiana,” said Tarver.

Mayor Thomas McDermott stressed that the project is on a fast track, and is expected to be completely finished, operational, and open to the public within the next 12 months.

“Woodmar Mall holds a special place in many people’s memories. We knew that whatever would take its place would have to be something equally special. In the 14 years that I’ve been Mayor, we hadn’t found it… up until now,” said Mayor McDermott. “We’ve looked at other areas, we know that this concept works. We think that this will be the lynchpin for this area.”

“Up until today, it was just a concept. Now, it’s real. This is happening. We broke ground and we’re moving forward,” said Mayor McDermott.

Christopher Murphy, Vice President of American Structurepoint says that his company has a long history of cooperation with the City of Hammond, going back some 30 years, and has worked with many other local projects, including local golf course projects, infrastructure, roadway and street improvements and many other projects.

“Our relationship with the city has always been very positive,” said Murphy. “This is the very best part of the job, and we appreciate everyone here who worked hard to get us to this point where we can break ground. They made this all possible, and we’ll see you next year at the ribbon-cutting.”

For more information about the project, please visit www.gohammond.com.