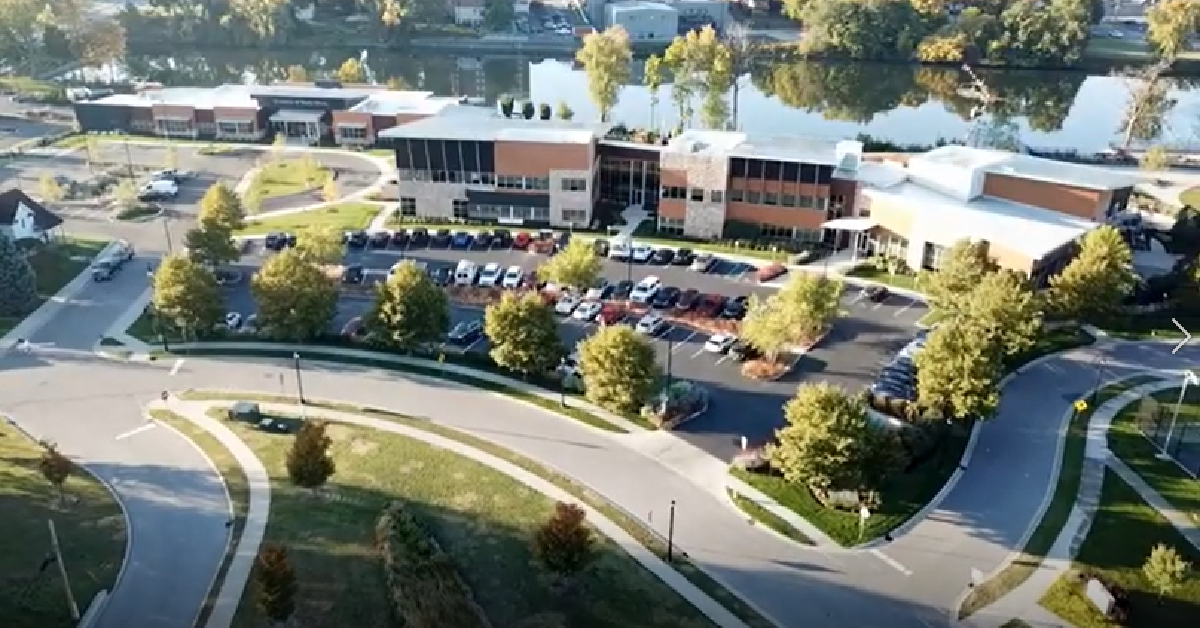 The compelling story of Center for Hospice Care (CHC) has been unfolding for over forty years. Today, most of society recognizes the need for compassionate, person-centered, end-of-life care. However, in 1978 it was a new and unique concept of a few visionaries. Little did those early dedicated volunteers who founded Hospice of St. Joseph County realize that it would grow to become Center for Hospice Care and would have the impact of serving over 40,000 patients and families over 40 years. But one thing has remained consistent, CHC serviced their first patient in 1980 with the mission to improve the quality of living for those on their services and in their community and it is still their mission today.

Center for Hospice Care is proud to announce the completion of their independently owned Mishawaka Campus. This state-of-the-art facility has been in the making for over ten years. The campus includes an administrative building, Hospice Foundation, Life Transition Center, a patient care staff building, The Center for Palliative Care, the Ernestine M. Raclin House, a guest house and a fitness court. Most of the buildings are riverfront with peace and serenity emanating from the St. Joseph River. The Mishawaka Riverwalk extends alongside the campus and is a welcoming beacon to enjoy the beauty. “Obviously looking at a beautiful view does something to the brain, it reduces stress, it can ease both physical and emotional pain and it just has a profound impact on our well-being,” says Sarah Youngs, Community Relations Liaison. “Mike Wargo and the planning committee outlined every inch of this campus. They had the community, patients and families in mind every step of the way.”

After finishing the Elkhart campus in 2007, CHC executive team began creating a three-year strategic plan. It was in these meetings that the vision arose for a much-needed implementation of a brick-and-mortar area that would be both beneficial to CHC and the growing need in the community for expansion of services. CHC had been leasing three separate buildings to be able to accommodate their staffing needs at the time. It had always been their vision to be the premiere hospice and palliative care organization for all end-of-life issues and with stewardship being one of CHC’s core values, it was important to look intently at the amount of money being spent on leases. The executive team decided that it was time to invest that money into something CHC would independently own, maintain and would allow growth in parallel with the demands of hospice care in their expanding service area.

Mike Wargo explains, “We sat down and geographically looked at where CHC patients were coming from and Mishawaka seemed to be the epicenter.” With stewardship and innovation at the forefront of this new project, they decided to reach out to the Mayor at the time, Jeff Rea, and the city planner at the time, Ken Prince, who met with CHC’s planning committee and the process began. The Hospice Foundation’s Chief Operating Officer, Mike Wargo, took the project under his belt as he had extensive experience in planning and development. Over the next year, they collaboratively researched many viable renovation options in Mishawaka as well as empty properties where they could envision building. When the group narrowed their prospects to the last four promising zones, they knew they needed to make a decision that would best fit CHC’s mission and vision. That was the beginning of turning the riverfront into something spectacular now known as Center for Hospice Care’s Mishawaka Campus.

In 2010, CHC decided to start acquiring properties on the waterfront of St. Joseph River in Mishawaka. “It took a couple years, but everything just fell into place,” explained Mike Wargo. “The city owned some of the land. There was also the Moose Lodge on the property along with some residential homes.

We just started going door to door and meeting with people about our prospective plans and hoped people would be on board with it.” Center for Hospice Care ended up helping the Moose Lodge find an alternate location suited to their needs and it was only a matter of time before the homes in the area were ready and willing to sell. CHC had each property appraised and purchased them at fair market value. After all was said and done, CHC started to build their vision in 2011 starting with the guest house that was remodeled to house Physicians going through the IU School of Medicine Hospice and Palliative Fellowship Program. At the same time the administrative building was constructed. This ‘Stage 1” was completed in 2013 and created the platform for the next step.

Hospice Foundation initiated a fundraising campaign called Cornerstones for Living: The Crossroads Campaign in 2014 which would prove to be revolutionary. “There were two major goals to achieve. The first, to create a warm and welcoming campus that brings together services in one location and facilitates care of the highest order while reducing annual expenditures. The second goal would be ensuring sustainable sources of funding that would provide essential and emerging programs over the long term,” explained Chris Taelman, Chief Development Officer for Hospice Foundation. “These goals provided guidance for the establishment of specific campaign financial goals prior to a quiet launch of the Crossroads Campaign in July 2014. Lead campaign gifts secured in the early months helped make way for the launch of the public phase of the campaign which was announced during a press conference on March 16, 2017.” The campaign raised five million in capital for further construction on the campus which included the patient care staff building and the Ernestine M. Raclin House. Cornerstones for Living: The Crossroads Campaign came to a successful conclusion in 2019 with contributions and pledges totaling just over $14 million – thanks to many generous donors, supporters and volunteers. “The Crossroads Campaign’s impact extends far beyond the construction of new facilities. It is helping us expand support programs needed for patients’ family members and loved ones, promote community education and partnerships for better quality end-of-life care, and meet the costs of providing charity care. The campaign was grounded in CHC’s promise made to the community over 40 years ago: no person eligible for hospice services would be turned away due to an inability to pay,” said Mark Murray, President/CEO of CHC and the Hospice Foundation.

The unparalleled Mishawaka Campus may be officially complete, but the story of Center for Hospice Care is still unfolding. The continuing dedication and adoration that CHC has for its community will never cease. Be on the look out for more transformational ventures in the near future.