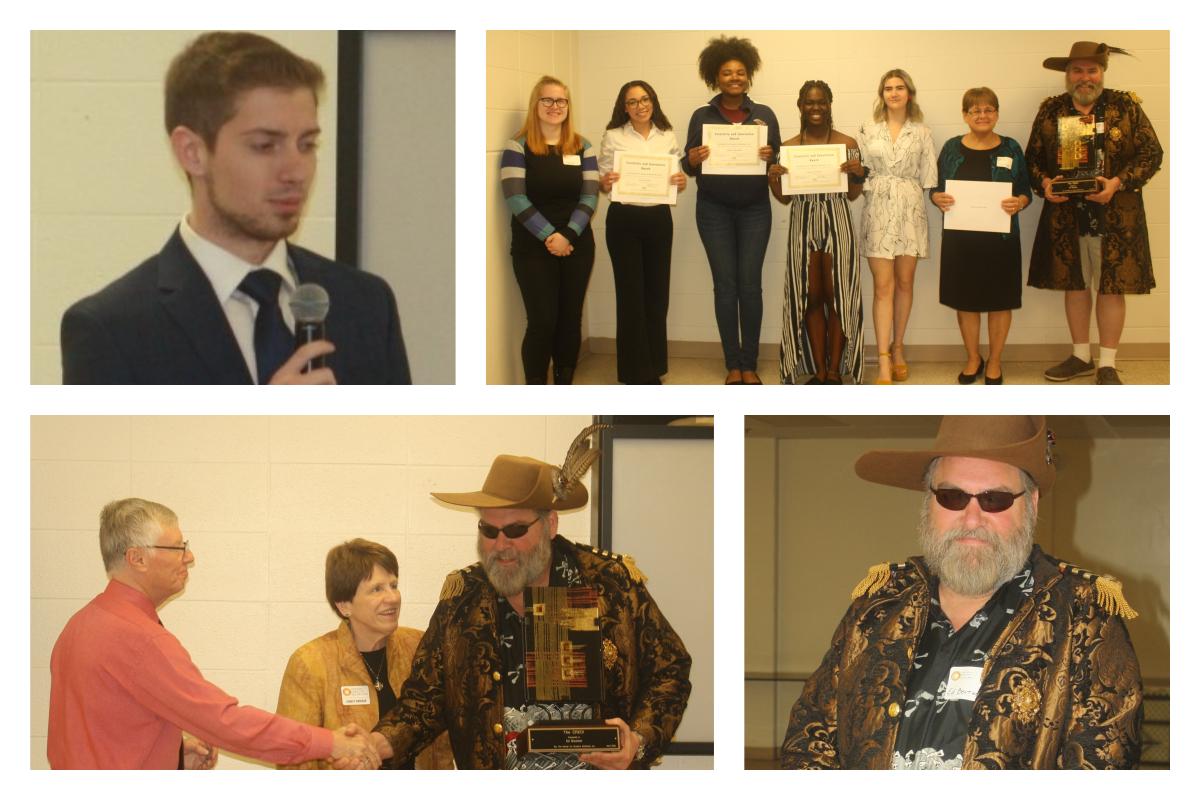 Keeping with the spirit of World Creativity and Innovation Week, the Center for Creative Solutions recognized six innovative students and Michigan City businessman, Ed Beutner, at its community breakfast on Friday (April 12). Officials, students and citizens ushered in the month-long series of community events “Celebrating Creativity in Our Community.”

Speaking at the A. K. Smith Career Center in Michigan City, Pat Lain, Board President of the Center for Creative Solutions, noted that the international celebration began in Canada in 2001. Today, over 50 countries celebrate the week. The United Nations has designated April 21 as “World Creativity and Innovation Day.” By doing so, the international organization recognized the importance of creativity and innovation in achieving its 17 “Sustainable Development Goals.”

Keynote speaker, Seth Spencer, Founder and CEO of SERA Solutions, talked candidly about his journey from a lackluster La Porte High School student to the owner of a leading media company in Michigan City. He was Indiana Small Business Development Corporation’s 2017 Young Entrepreneur of the Year. In addition, Spencer serves as a board member for Junior Achievement in La Porte County, where he teaches business and entrepreneurship skills to elementary school students.

He attributed his success to curiosity, perseverance, collaboration, investment in other people and humility. “You can’t do it alone. I wouldn’t be here today if I had tried.”

Spencer advised the audience to “follow your passion,” adding “it is the small choices that make a difference.” As he establish his business, Spencer noted, every step– successful or not, small or large– was crucial. “Never stop learning. Never be afraid to ask questions.”

He recalled his first professional job-- repairing a computer in an hour for a New Buffalo customer. “At 18, I didn’t know how much to charge,” said Spencer. So, he handed the invoice to the client who immediately tore it up. He then told Spencer that he did not charge enough because knowledge is more valuable than time. From that, Spencer learned to “know your worth.”

After the presentation, a number of creativity and innovation awards and scholarships were given. The Center for Creative Solutions presented its sixth CREO! to Ed Beutner, a Michigan City business owner. Cynthia Hedge, CEO of the Center, said Beutner’s leadership embodies creativity, defined by Albert Eienstein as “...intelligence having fun.”

She listed a sampling of community programs and events in which Beutner played an instrumental role. These included the “Save the Catwalk” project on Lake Michigan; the Michigan City Sea Scouts; “Cardboard Boat Dash”; and the Michigan City Police Department Easter Egg Hunt.

While these are important, Hedge said, “What our Board was most impressed with was Ed’s use of his intelligence and ability to have fun to engage hundreds of children in reading.” She noted that Beutner “used his own initiative– no one asked him to do a reading program. In addition, he spends his own time and money to encourage children in our community.”

For starters, Beutner created the “Captain Ed and the Rowdy Readers” at Michigan City’s Pine Elementary School. From there, he took his reading program to other schools and organized “Reading Rallies.” At all of these events, Hedge noted, he injects fun by dressing up as a Viking raider.

From there, Beutner began to allow successful readers to visit his store, play with antique pinball machines, pick out candy and then choose a book from Ed’s own library. Today, students are welcome to stop at his store and acquire a “Ship’s Reading Log.” After completing the log of books read, readers are treated with candy and a book.

The creativity/innovation scholarships were provided by Dr. Rakish and Bina Gupta and the B. R. Foundation of Michigan City. The awards are named after Bina Gupta’s father, Tej Ram Gupta.

During the award presentation, Lain noted that the Guptas were inspired to sponsor the scholarships several years ago. At the community breakfast in 2015, they received the CREO! award. At the time, the Center was granting the scholarships, but at a significantly lower level than now. When the couple heard the stories of the A.K. Smith Career Center award winners– their challenges and successes, they committed to the yearly scholarships.

The next free public event during World Creativity and Innovation Week is on Monday (April 15) at Lake Hills STEM Magnet School, 201 Ferguson Road, Michigan City. Over 500 young innovators will share their projects from 5:30-7:00 p.m.

For more information, go to centerforcreativesolutions.com, send an email to creativity52@comcast.net or telephone 219-861-0955.