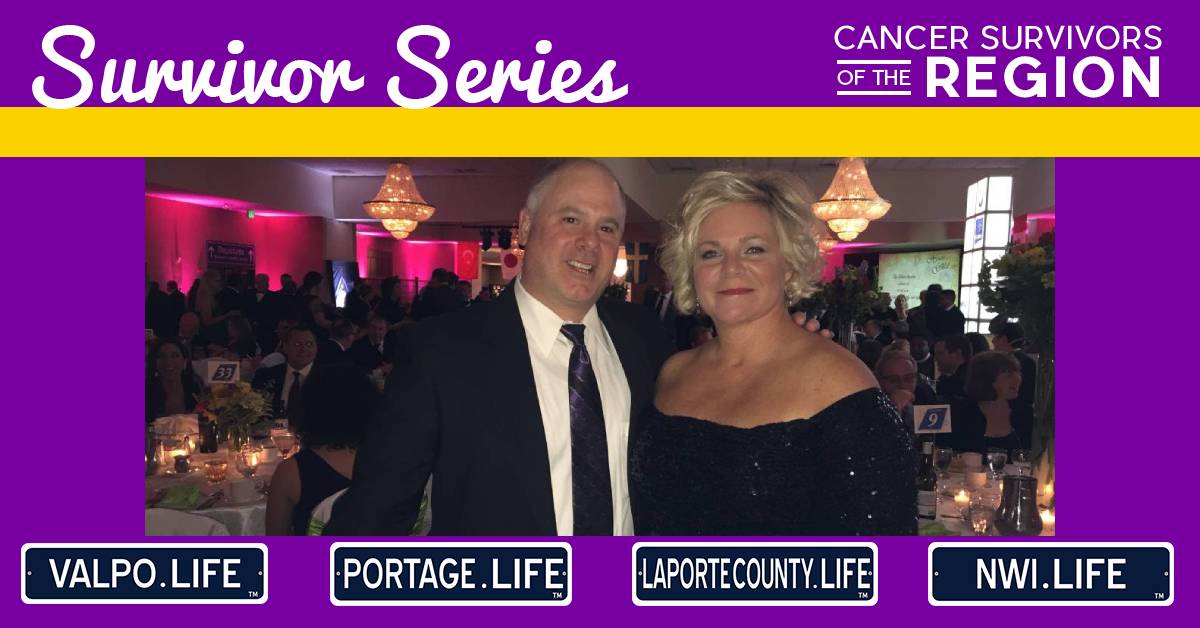 “You don’t have to go through this journey alone,” said Wendy Mang, Community Development Manager at the American Cancer Society (ACS), and a cancer survivor herself.

When Mang was first diagnosed with a rare form of bone cancer, she began researching and came upon the American Cancer Society. At that time, she thought the organization only conducted research, but when she signed up for the Duneland Relay for Life, she soon discovered a community full of helpful resources, support, friendship, and healing.

“For me—and I’ve heard this from many survivors—you go through the grief stage of ‘why me?’ and getting involved with a group of individuals who were going through something similar to what I was going through was healing,” Mang said.

After undergoing jaw surgery to remove the tumor, Mang continued volunteering for the ACS, and in 2011 took a full-time position with the organization. This new position offered her the opportunity to help others going through their cancer journey by connecting them with the services the ACS can offer.

“Everybody’s journey is completely different and everybody deals with their diagnosis differently, but everybody needs to know that there is always somebody there at ACS to talk to,” she said. “Being able to open up and talk to somebody is helpful. When I first started, I thought that all the American Cancer Society did was research. It was important for me to bring awareness to Northwest Indiana about the programs and services that we have to offer.”

Mang found that being diagnosed with cancer pushed her to also volunteer at other organizations within her community. Recognizing that giving back offered her a healing outlet, she got involved with Chesterton Tri-Kappa, Rebuilding Together, the Shirley Heinz Land Trust, and Free the Girls, among other organizations. By helping and giving back to her community Mang was able to get out of her own head and pull her mind away from negative thinking.

“I do feel that greater giving heals your soul. You may feel alone at times, but getting involved with an organization helps you feel included and like you’re a part of the team and part of something bigger,” Mang said. “It’s important for me spiritually to be involved in something that is bigger than myself. Knowing that I can give back just makes my heart so happy.”

In 2016, Mang found that the cancer had returned in the same area as before. This time, however, she had a community to surround her and the knowledge, tools, and resources to face this new diagnosis head-on.

“I didn’t let those dark thoughts come into my mind the second time around,” Mang said. “It was much easier to navigate because I knew of the programs and services. If there was something I needed, I took advantage of them.”

She again would go through jaw surgery, but this time, her entire left jaw bone would be removed and bone fragments taken from her femur were used to rebuild the jaw. The recovery process was much more involved and longer than before, but Mang was ready to face this battle.

“I basically knew what the journey was going to be like and I knew that if I had beat it once, I could beat it again,” she said.

Throughout her journey, in addition to the joy that serving her community brought her, Mang received support from family and friends when needed, mainly, her husband and two sons.

“My strength was my family. I have an incredible husband who supported me during the time of my surgery and recovery. He’s been my rock,” Mang said.

From her initial diagnosis to now, Mang is happy to be looking forward to a bright future full of new experiences with her family.

“I’m very much looking forward to my oldest son getting married. Going back to my thoughts when I was initially diagnosed in 2007, I didn’t think that I would see the day my boys would graduate high school, college, have careers, get married, or have kids,” Mang said. “I’m very much looking forward to being a grandma at some point and I’m just excited to see the next generation of our family come about.”

As Mang would say, cancer is her life because her position at ACS keeps her in constant contact with those walking their own cancer journey. But it’s not something she would change, because, through her own battles and years of working with the ACS, she has gained some valuable advice for anyone dealing with cancer.

“If you’re secluding yourself, that’s when your mind can go dark and you become depressed. Remain positive and find what makes you happy,” Mang said. “Also, be an advocate for your own body. If you know that something is not right, you need to be willing to speak up for yourself.”

She encourages anyone who is going through a journey with cancer, a caregiver, or even someone who just wants to help support the cause to get involved with the ACS through one of their many community events.

“There are a lot of events that we have throughout Lake, Porter, and LaPorte counties and we have a lot of different ways for those who are interested in getting involved to do so. They can definitely get in touch with me,” Mang said.

You can find more information about the ACS and the services they provide through their website:  http://www.cancer.org/about-us/local/indiana.html