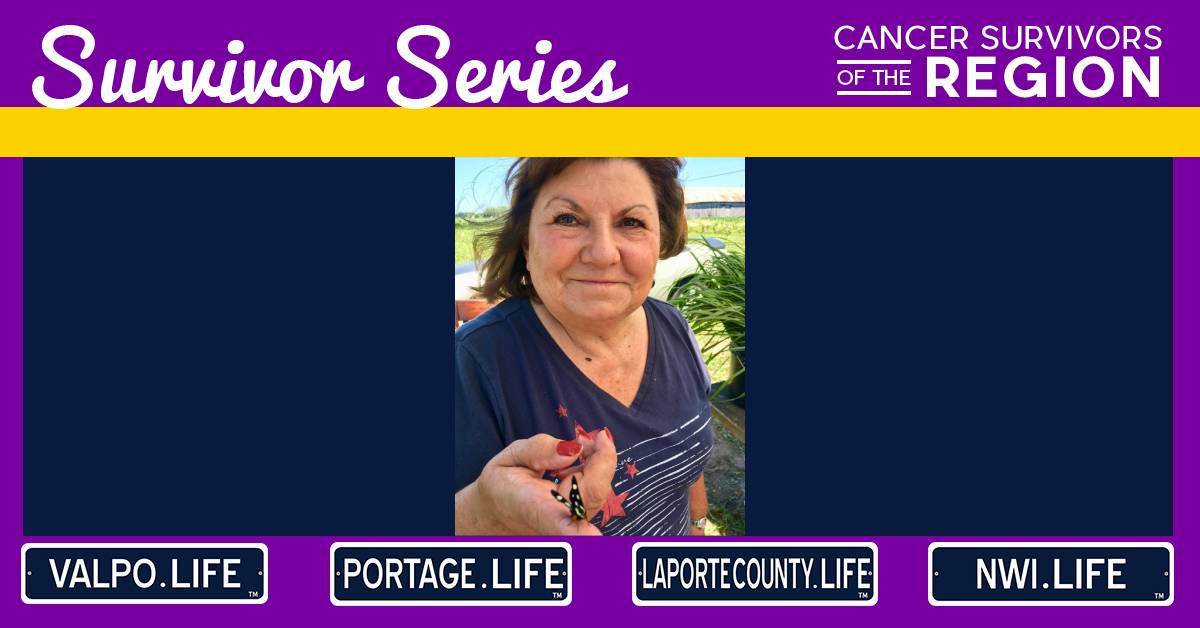 Toni Miller is known among friends and family as the butterfly lady, a nickname bestowed when she first discovered she had cancer, and a welcome sign of hope at the time.

Miller’s battle against cancer began the way one would expect: with pain. Her big toe was hurting and she had a high fever once a month. She noted that she developed severe pneumonia that left her with spots on her lungs. “God sends me pain for a reason,” Miller said. “I fully believe that.”

Her pain led her to visit her local hospital in Hobart where they informed her that she had cancer, though they could not determine the type of cancer at the time. From there, Miller went to the University of Chicago for a second opinion.

At the University of Chicago, they were not sure if it was cancer, but noticed that she had pockets in her lungs. They performed a biopsy and removed a fifth of her right lung along with a tumor. It was then that they confirmed she had lung cancer.

“I had either three or four other tumors in different places in both my lungs,” Miller said. “They said they could not do biopsies on those because I would not have lung tissue left. As a result of that I did six months of chemo. I had it done here, locally. Now, I go in once a year for a CAT scan and blood work. They said it’s a very slow-growing, small-cell cancer and I’ll have it for the rest of my life. I probably had it for 10 to 30 years before I was diagnosed.”

It has been nine years since Miller’s diagnosis and she still has issues with her lungs. “All these lymph nodes and pockets have gotten a little bit better in my lungs, but the aftereffect is I’m short-winded and I have a lot of breathing problems,” she said.

While she has regular checkups and must deal with slow-growing cancer for the rest of her life, Miller remains hopeful

“I had somebody tell me when I was diagnosed, ‘Don’t let cancer define you and keep as much of a normal routine as you can.’ That’s what I try to do.”

Miller first found hope for her recovery the day she was diagnosed.

“The day I was going to the doctor to get my diagnosis,” Miller said, “my husband and I were sitting on the porch and I asked God to give me a sign that everything would be OK, and this little butterfly came out of nowhere. She sat with us for an hour or hour and half. She landed on our heads, our shoulders, our feet, on the rug. She never left. I went to the doctor and he said it was cancer. I came out and thought, ‘I think God sent me a sign. Everything is going to be okay.’ I said, ‘I’m hungry, let’s go eat.’ We came back and the butterfly was still there.”

This symbol of hope was further strengthened after a biopsy. “I was going in for a biopsy,” said Miller, “and the radiology person said, ‘Oh my God. Am I seeing what I’m seeing? This looks just like a butterfly!’ I told her the story about the butterfly. She started crying. To me, that’s my sign of hope and I try to give that to others. There’s always hope. Cancer is not a death sentence anymore.”

Butterflies have remained Miller’s symbol of hope. She finds strength through that and through the people who have helped her along her journey to recovery.

She is grateful for the American Cancer Society, her late husband, and her daughter. Her husband looked after her and their household and her daughter brought comfort with her presence.

“I remember after my first treatment, my daughter came and spent the night,” Miller said. “She wanted to sleep next to me.”

She is also thankful for the women at the infusion center at the hospital in Hobart.

“I had my first chemo treatment on the day of my 65th birthday,” Miller said, “and I remember walking in and they had a bouquet of flowers for me and a birthday cake. They sang happy birthday to me.”

With the help of these people, Miller advises others who have been diagnosed with cancer to depend on their friends and family. She also advises clinging to faith, being selfless, establishing a routine, getting second and even third opinions on diagnoses, and refraining from too much self-education around the disease.

“The less you know, I think the better you are. You have a bigger sense of hope because, you know, you can read all that stuff and it can devastate you,” she said.

Miller would like to challenge others to establish their own definitions of themselves and said, “Never give up; keep fighting.”