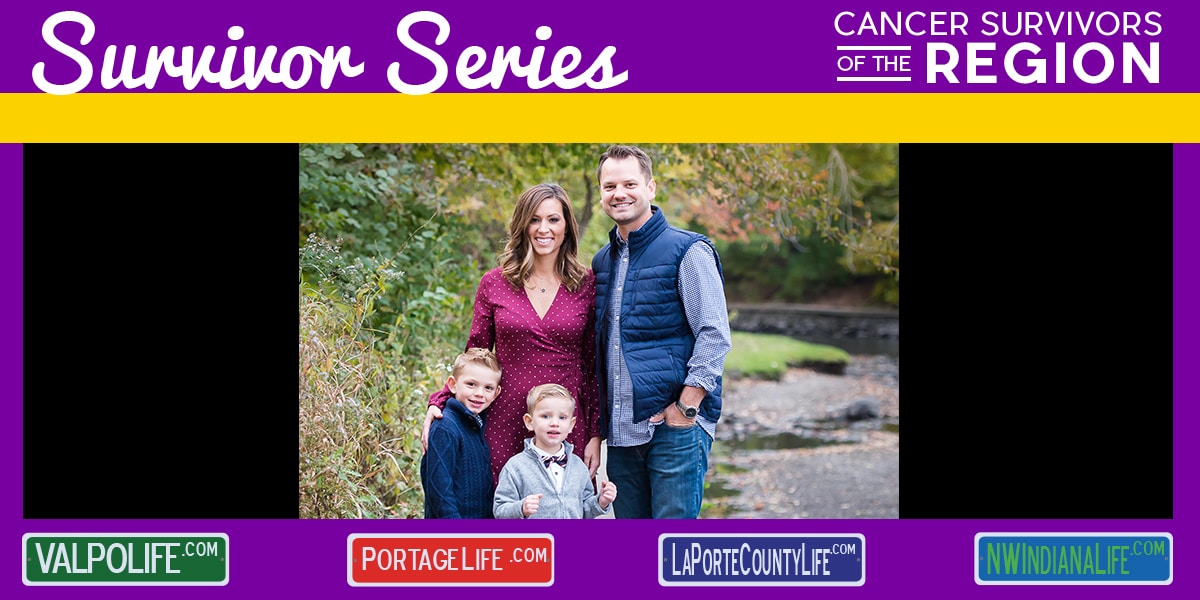 After months of dealing with constant hip pains, fevers and dramatic weight-loss, at 22-years old, Phil Zielke was told he had stage 4 Hodgkin’s Lymphoma.

“It was very scary to hear those words attached to your name, and it affected me and my family in deep and profound ways,” said Zielke. “My whole process to finally getting to my diagnosis was kind of messy.”

Before the fight of his life, Zielke was a 4th grade teacher who had just celebrated a second dating anniversary with this then girlfriend (now wife), Carrie. It wasn’t until a broken collarbone from a soccer game that Zielke started to notice the symptoms.

“[When I broke my collarbone] I was prescribed pain medication which covered up some of the symptoms,” Zielke remembered. “Then they said there was something wrong with my sciatic nerve where my hip would basically pulsate, so they put me on a muscle relaxer which again covered up the pain.”

After months of testing and reassurance from doctors that it wasn’t cancer, Zielke found himself in disbelief when his world was shattered. During a family movie night, Zielke recalls going to his room the night one doctor from the University of Chicago called.

“My doctor said I was lucky to be alive. The symptoms I was showing were signs of stage 4 with the disease Hodgkin's Lymphoma,” Zielke said. “I had lost 40 lbs at that point, I had hip pains and fevers.

“I hung up the phone and walked in to face my family and I kind of collapsed on the side of the couch and I just cried uncontrollably for about 25 minutes,” Zielke added. “I had just been holding in so many emotions for so long about what was wrong with me.”

With a new diagnosis, new fears crept into Zielke’s mind.

“I started to wonder if they caught it soon enough? Are they going to be able to do any treatment? If so, what’s that going to look like?” Zielke recalled.

The night of the phone call, the doctors said to “pack a bag” and to come in immediately the following day.

Following the doctor's orders, Zielke said a group of medical professionals provided their plan, saying they would do as much as they could and be as aggressive as they could because it was so advanced.

Zielke would endure six months of chemotherapy. He soon realized the hospital was going to be his new home.

“During this time, life really stood still for me,” he said. “Life, when you’re sitting in a hospital bed compared to the busy, fast-paced society we live in…you really start to realize who you are and what you think about life. You start examining everything.”

A week after the diagnosis, Zielke received a package from a group of people. They all signed their names as a reminder he had the support he needed to get through this chapter of his life.

“It helped me realize that I wasn’t going to be alone for this journey and I was going to get the opportunity to accept other people’s help,” Zielke said. “I started to receive packages or card daily. I’d sit on the couch, make my way down the stairs, then stop catch my breath, make my way to the front door to check the mailbox to see if someone remembered me. Just about every single week of my two-year journey, I pulled out a card.”

After six months of chemo and what seemed to be the end of this journey, Zielke, his family and girlfriend were told by doctors he was “cancer-free.”

“I was thrilled, so I went back to teaching that September,” Zielke said. “I got a job as a 4th grade teacher, got on payroll, plus insurance, which was a HUGE blessing, and my 4th graders were excited for me to walk back into the classroom.”

As Zielke eagerly started to take back his life with a new job and plan for his wedding, which was three months away, a familiar pain started to surface.

“The pain started in April and I knew exactly what was causing pain,” Zielke said. “This time, the doctors said they were going to go 10 times more aggressive for 100 times the effect.”

Zielke added, “It was hard to break the news to Carrie that we need to postpone the wedding and we might never get married, or that life was going to look a lot different than what we thought.”

Over the next year Zielke’s new treatment plan included chemotherapy, a stem cell transplant, and then radiation.

“Finally, the doctor said I was cancer-free but what I took from the second time going through this was that it made me angry,” said Zielke. “I was angry because I wanted to give back and help those who were going through similar circumstances and I was three months away from my wedding.”

Looking back, Zielke said everything he went through that next year was a huge blessing. Along with the amazing doctors and nurses, Zielke credits the way people loved him through his journey to recovery. It was the love and thoughtfulness that inspired Zielke’s next project.

Zielke was determined to show support to others going through a similar journey and created “Phil’s Friends.” With the help of volunteers, the organization now sends more than 15 thousand care packages across the nation.

“Looking at my life now, married with two boys, I look back knowing it wasn’t just me going through this, it was a team of us working together to get through the other side and say, “I’m cancer free.”