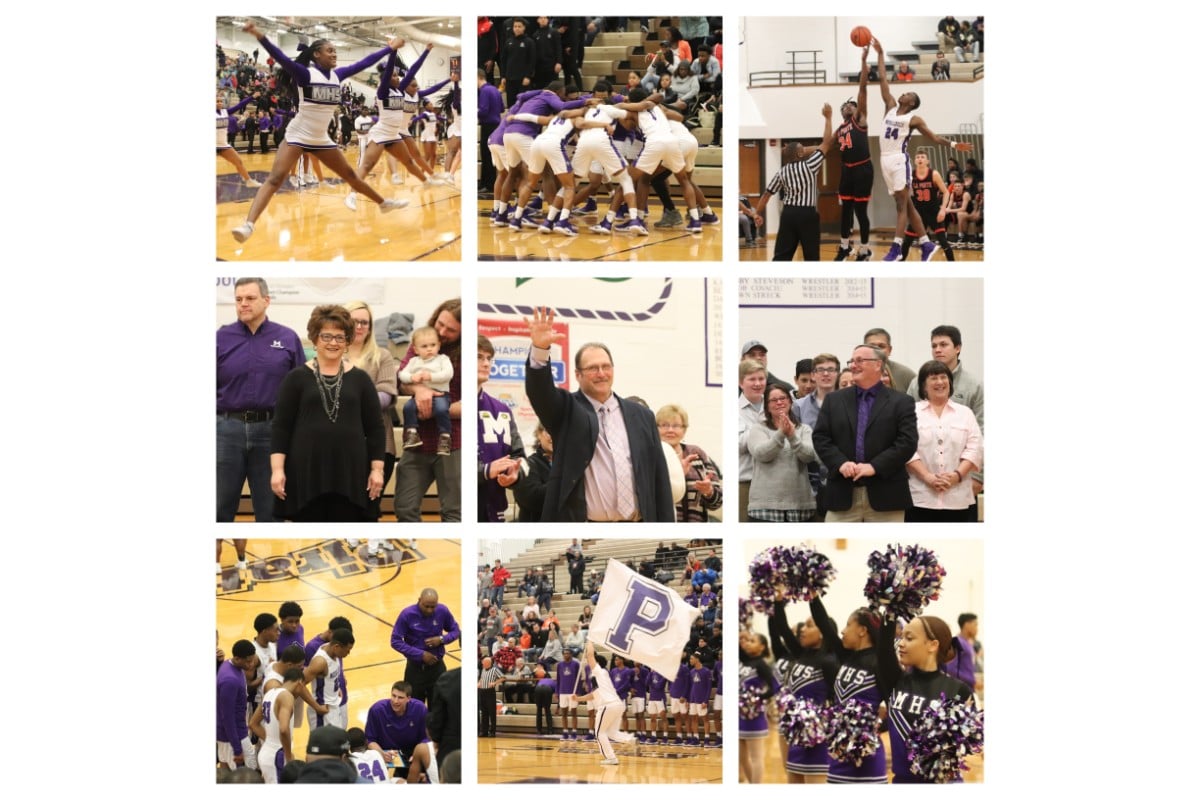 Growing up, we all have certain mentors that find some way to touch our lives and give us guidance along the way. For many, these role models come in the form of coaches who give guidance about the sports they play. Inevitability, they end up teaching the game of life as well. Nowhere is that more evident than at Merrillville High School, where three coaches were inducted into the Merrillville High School Coaches Hall of Fame.

The induction took place Friday evening at the boys’ varsity basketball game against La Porte. After an energetic first half with both teams running up the score, the lead bouncing back and forth from Pirates to Slicers, the Merrillville High School family turned their attention to center court where the new inductees were honored.

First to join the 17 coaches currently listed in the hall of fame was Joe Atria. Coach Atria was involved in the track programs as an assistant from 1983-1985 and then as head girls coach from 1985-2005, as well as an assistant varsity football coach since 1982. He was inducted after 38 years of incredible service to the Pirates, and says he’s learned something new every year.

“I like saying that the one thing I keep learning year after year is how little I really know about football,” said Atria, “There’s a lot of ways to do things, and you learn something new every time you step out there.”

Atria attributes his successful career to the outstanding program he came from when he himself played high school football, as well as his mutual love for both sports and science.

“I had some really great coaches in high school I came from a very successful high school program where we played in the state championship for Illinois,” said Atria, “They inspired me to want to continue to do this. I’ve always loved sports and the science that goes into it as well. Being a science teacher and a coach gives me the opportunity to do both!”

After his many years of loyal service, the honor Atria received tonight felt, to him, like a dream.

”It’s surreal,” Atria said smiling, “It’s amazing the number of former athletes and coaches that came back for this, I’m honored.”

The second coach inducted was Lori Govert, joined by her husband and children. A 1983 Merrillville graduate and former Pirate cheerleader herself, Govert has dedicated 28 years to coaching her squad to great heights. Her program has won numerous awards, always making the school proud, and ranking among the best in Indiana thanks to Govert’s passion and knowledge.

“It’s truly an honor to be inducted,” said Govert, “Not many schools in the area even have a coaches hall of fame at their high school, and for a cheerleading coach to be inducted says a lot about the respect the school corporation has for the sport and the number of years I put in.”

Like Coach Atria, Govert also had former athletes come back to support her in the special moment of recognition.

“So many former cheerleaders came back,” continued Govert, “it’s awesome to see everyone again! I’m lucky to have my husband and daughter here with me as well; they’ve sacrificed so much with me coaching all year round, and I truly appreciate everything they’ve done for me.”

Melissa Hittle and Samantha Puskac, squad members of the classes of 1996 and 1995 respectively, were among Coach Govert’s many supporters.

“She’s just the best coach,” said Hittle, “She always had so much fun with us and gave us guidance that we didn’t even realize at the time, life lessons that we would cherish forever.”

“She was the beginning of us learning things like teamwork and sportsmanship,” said Puskac, “she worked us hard, but it was really worth it because we always had a good-looking squad when we hit the floor. She made me love it, and I’m still involved in cheer to this day as a coach myself now.”

“I remember when we went to cheer camp she always told us to ‘get in the front’, so everybody notices us,” continued Hittle, “so to this day if I’m ever in a gym class I always go to the front!”

Coach Govert’s passion for cheer has carried her throughout her career, but she says her favorite part is just getting to be a Pirate.

The final inductee of the night was Dennis Hamilton, accompanied by his four children and six grandchildren. Hamilton was a volunteer assistant varsity football coach at Merrillville since 1982, and worked for 5 different Pirate head football coaches during his 37 years.

“I’ve been around great coaches, and great coaches teach coaches well,” said Hamilton, “You name it we’ve learned it; everything changes from year to year so it’s been an unbelievable journey.”

Hamilton was honored to be recognized for his outstanding coaching achievements, but emphasizes the well-being of the athletes above everything.

“I’m stunned to become a member of the hall of fame tonight,” said Hamilton, “I never got into coaching to think about myself, it was always about the kids, about making a program work. That’s still the way I feel, It’s not about me, it’s a community. We have a great school, administration, and athletic department, and I’m proud to be a part of it.”

As the applause settled and the inductees returned to their seats to watch the athletes of today finish up the fourth quarter, the varsity basketball team kicked into full gear. Though the battle was well-fought by Slicers and Pirates alike, in the end the Pirates came out on top 71-68.

The win was a great way to celebrate the new inductees and their accomplishments.

The Pirate family is proud to welcome Coach Atria, Coach Govert, and Coach Hamilton into the Merrillville High School Coaches Hall of Fame. As the saying goes, once a Pirate, always a Pirate!