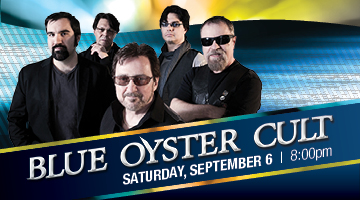 Rock band Blue Oyster Cult, with hits from the 70s and 80s including "(Don't Fear) The Reaper," "Godzilla" and "Burnin' for You," takes the stage on Saturday, September 6 at 8 pm CT in the Stardust Event Center at Blue Chip Casino, Hotel & Spa, Michigan City, Indiana.

Tickets start at $35, and can be purchased by credit card at Ticketmaster.com or in person at The Gift Box in the Blue Chip Casino pavilion. Guests must be 21 or older, with a valid state or government issued photo ID.

Since the hard rock/heavy metal band's debut album by the same name in 1972, Blue Oyster Cult has sold more than 24 million albums worldwide, including four gold and one platinum release. The latest Blue Oyster Cult album is a compilation, The Complete Columbia Albums Collection, released in 2012.

Blue Oyster Cult fans can enter online until August 25 at bluechipcasino.com/oyster to win a VIP Weekend, including two front row tickets, a September 6 overnight hotel stay and dinner for two at any Blue Chip venue ($100 value). See the website for details and official rules.