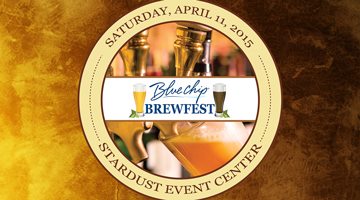 More than 250 brews from more than 50 specialty breweries will be available to taste at the ultimate beer sampling event, Blue Chip Brewfest, sponsored by Blue Chip Casino Hotel Spa, Michigan City, Indiana, on Saturday, April 11 from 1:30 to 5 pm.

Because of the popularity of Blue Chip Brewfest, now in its fifth year, the event will be held in the Stardust Event Center at Blue Chip and also in an adjacent climate-controlled event tent.

Tickets are $99 for the Brewmaster Package, $75 for VIP admission, $45 for regular admission and $15 for designated drivers and are available at Ticketmaster.com or at the Blue Chip Gift Box in the casino pavilion. Guests must be 21 or older, with a valid state or government-issued photo ID.

VIP ticket holders receive early admission and can attend the Indiana Beer Tour featuring unique beers from breweries located in Indiana from 1 pm to 3 pm. They will also receive a pint glass.

General admission ticket holders receive a pint glass and guests with designated driver tickets will receive complimentary specialty soda and water, but are not allowed to sample alcoholic beer.

Music has been added to this year’s Brewfest: The Allen Wronko Band and the Zydeco Voodoo band will be playing during the event.

Blue Chip will hold a silent auction during the event for premium items such as a mini-fridge, coolers and other beer-themed collectibles. Proceeds will benefit the United Way of LaPorte County.

Food offerings available for purchase will include brats, hot dogs and pretzels. All of the Blue Chip restaurants will be open.