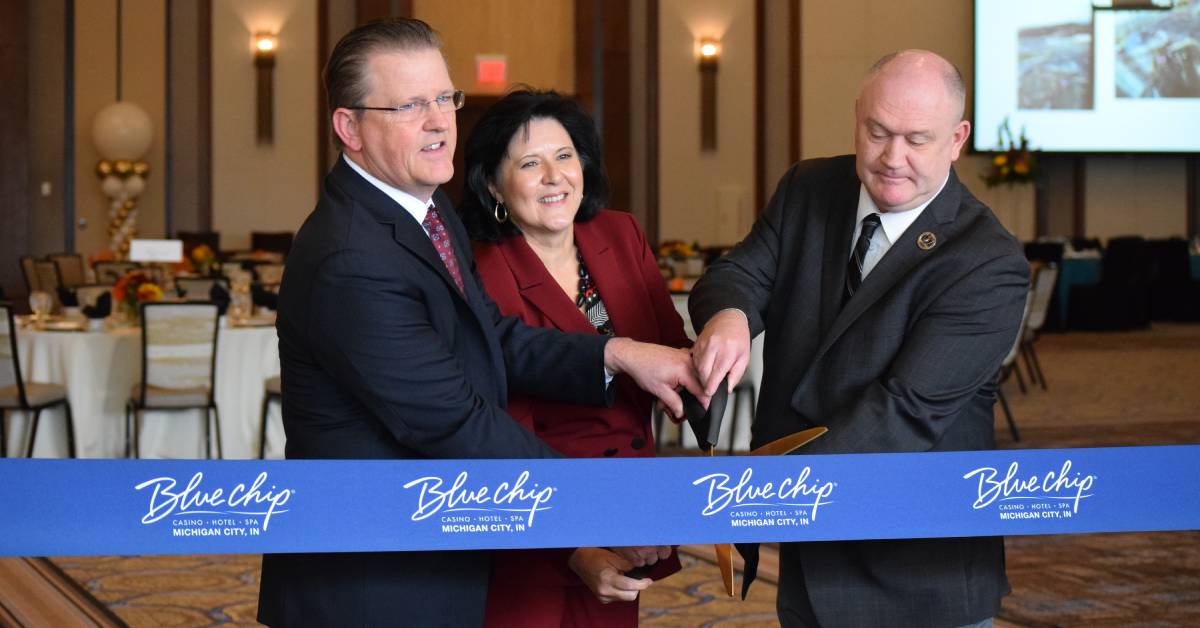 Today marked the grand opening of 45,000 square feet of brand-new event space. The Fremont Ballroom, named after the Las Vegas parent company of Blue Chip Casino, Hotel, & Spa, aims to bring in bigger and better conferences that will boost the reputation and economy of Michigan City as a whole.

The almost 15-million-dollar project will be home to conferences, community events, private parties, weddings, company meetings, and so much more. The staff is on-hand to make your next event stand out with a large number of linens, decorations, and set-ups available. Joel Giannetti, Director of Marketing for Boyd Gaming, was most excited to see how this new space is going to affect Michigan City.

“This is exciting not only for Michigan City, but the property itself,” Giannetti said. “With the edition of our Sportsbook and now an additional meeting space, we just think it’s a great addition to the property and to the community.”

Brenda Temple, Vice President and General Manager of Blue Chip, said this expansion was a no-brainer. Because of the elite sales team, many of the conferences previously held at Blue Chip grew out of the space. But with the addition of Fremont Ballroom, those conferences can return and continue to grow.

“We saw an increase in demand over the last several years for meeting and convention space, so this was a plan that didn’t have a whole lot of risk to it,” Temple said. “We’ve grown so much in this facility since we opened in 2009, and I think we are going to do great things with this new space.”

Anything that brings visitors and their families to town is going to generate revenue for more than just Blue Chip. Visitors will take advantage of restaurants, shopping centers, lakefront, and other community amenities during their stay. Michigan City Mayor Ron Meer saw the fruit this expansion would produce, even before some others did.

“It’s great to be here and celebrate the partnership we’ve had for over twenty years with Blue Chip Casino. This was a true collaboration, and it was a great pleasure to work alongside them,” Meer said. “If you look at this as a tree, they give a lot of fruit to our community that we utilize for infrastructure, for philanthropic groups, the jobs they provide –I could go on and on about what a benefit this is for Michigan City.”

Executive Director of the EDCMC, Clarence Hulse, was on board since talks of this expansion started almost three years ago. The biggest hope out of this project, is to continue to put Michigan City on the map and show it’s a great place to invest your money.

“This is an awesome project, this is a fabulous facility and since Blue Chip has already established themselves, this just enhances it,” Hulse said. “This is an exciting time for Michigan City, we’re on the move in the right direction with lots of great investments going on in the city.”