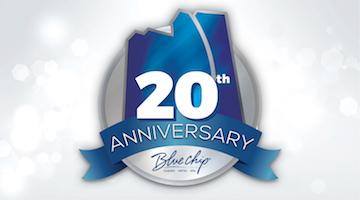 “Over the last 20 years, our ongoing investments in Blue Chip’s gaming, dining, entertainment and hospitality offerings have firmly established Blue Chip as the region’s leading gaming entertainment destination,” said Ted Bogich, Executive Vice President of Operations for Boyd Gaming. “We look forward to continued success in the years to come, as we welcome guests from Indianapolis, Chicago, southwestern Michigan and beyond to Michigan City, our home and our partner community for two decades.”

Blue Chip Casino, the only Indiana casino boat to be built on site, launched August 22, 1997. A third deck was added to the boat in 1998. In 1999, Blue Chip was acquired by Boyd Gaming Corporation. The Blue Chip Hotel was added to the property in 2000 and another third deck expansion in 2002 brought the casino space to 42,500 square feet. In 2006, the new Blue Chip vessel launched, featuring a 65,000-square-foot single-level casino.

The 20th anniversary celebration includes several giveaways for B Connected members. Members earning 100 base points can receive an anniversary t-shirt on Wednesday, Aug. 8 from 10 a.m. to 7 p.m., while supplies last.

The festivities continue Aug. 30 from 10 a.m. to 7 p.m. with a Blue Chip print giveaway. B Connected members earning 50 base points will receive a complimentary Blue Chip South Shore Print while supplies last.

Highlighted within the destination’s August anniversary events at Blue Chip is the hit tribute show, “The Man in Black, A Tribute to Johnny Cash.” Starring accomplished musician and singer songwriter Shawn Barker, the show highlights the retro look, sound and feel of Cash’s performances from the beginning of his career in the early 1960s to his later work. Tickets, starting at $15, are on sale now at ticketmaster.com or the Blue Chip Gift Box. Guests must be 21 or older, with a valid state or government issued photo ID.

For additional details on Blue Chip’s August 20th anniversary celebration events, visit www.bluechipcasino.com or call 888-879-7711. Obtain a free B Connected card at Blue Chip Casino, Hotel & Spa or at any of the Boyd Gaming properties and register the card online at www.bconnectedonline.com.