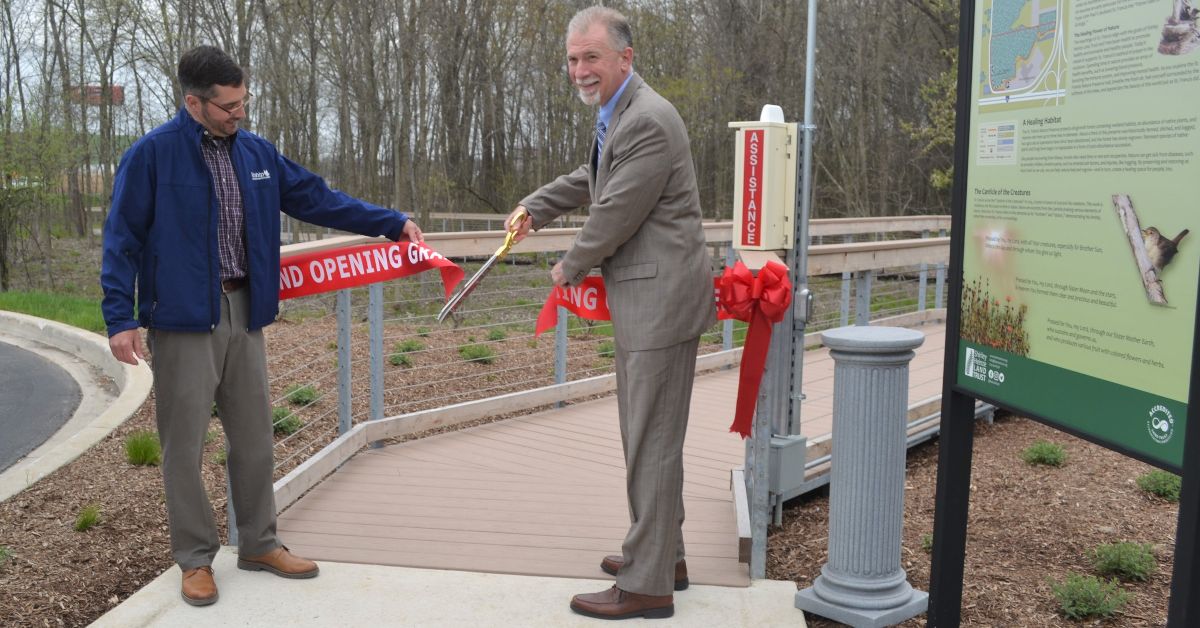 A more than quarter-mile boardwalk now winds through the forested wetlands on the west side of Franciscan Health Michigan City, providing a healing habitat for strolls outside of the hospital.

A group of hospital officials and community members gathered on May 5 for a blessing and dedication of the St. Francis Nature Preserve, a joint project of Franciscan Health Michigan City and the Shirley Heinze Land Trust.

The planning for the trail began in 2016 when design and construction of the hospital on the north side of Interstate 94 was under way. “We were looking for a partner that had a value system that lined up with us and that we knew would take this seriously. We only thought of one name, and that was the Shirley Heinze Land Trust,” said Franciscan Health President and CEO Dean Mazzoni.

Kris Krouse, executive director of the Shirley Heinze Land Trust, praised the partnership with Franciscan Health and the contributions of Tonn and Blank Construction and Soil Solutions, Inc., which was involved in identifying the wetlands and working on protection of the property.

Krouse recalled an early discussion with Dale Engquist, the late conservationist, and former Indiana Dunes National Lakeshore superintendent. “One of the things Dale said early on is ‘wouldn’t it be great to have a St. Francis nature preserve next to the hospital?’ So here we are.” St. Francis of Assisi was known for his reverence for nature with Pope John Paul II declaring him the “Patron Saint of Ecology.”

“A lot of work and collaboration has gone into not just preserving the natural lands, but also creating this beautiful boardwalk. We’ve had a lot of trails developed over the years on our preserves, and one of the things you’ll find with this trail is that it’s really state of the art. It’s accessible,” Krouse said.

“We’re grateful that we could partner with the Shirley Heinze Land Trust and make this dream become a reality and offer this to the public so that others can enjoy the wetlands, the wildlife and even have a little bit of a respite sometimes from what might be going on inside the four walls of this hospital,” Mazzoni said.

The Rite of Blessing was conducted by Father Joseph Uko with a reading by Franciscan Health Michigan City Vice President of Mission Integration Sister Petra Nielsen.

The blessing was attended by members of the Michigan City Rotary Club, which contributed a bench dedicated to those healing from perinatal loss. Jessica O’Brien, who lost her infant daughter Allison, spearheaded the effort when she was club president.

“When I came across maternal health as one of the initiatives for Rotary, I knew that I wanted to partner with Franciscan on it, so I met with Sister Petra and asked her what we could do. She said they were in the process of making this walking trail and they were looking for people to donate benches. I thought that was a great way that Rotary could contribute to other people suffering in the same way,” O’Brien said. The club held projects to raise money and used a grant through the Rotary Foundation and member donations to fund the bench.

Also attending were Amber and Troy Glass. Amber’s mother, Tricia Dolph, was a longtime nurse at Franciscan Health Michigan City who passed away from cancer in February 2020. Tricia’s colleagues donated money to fund a bench in her memory. Hospital volunteer Darlene Manuzzi and physician Matt Provenzano and his wife, Shana, also donated benches.

The St. Francis Nature Preserve can be accessed from the parking lot outside the hospital Emergency Department, and the public is welcome to enjoy the trail. The old-growth forest contains a wetland habitat with an abundance of native plants, including oak trees. A third of the preserve was historically farmed, ditched and logged, but since those operations were abandoned, the forest has slowly repopulated with remnant species of native plants and fungi.