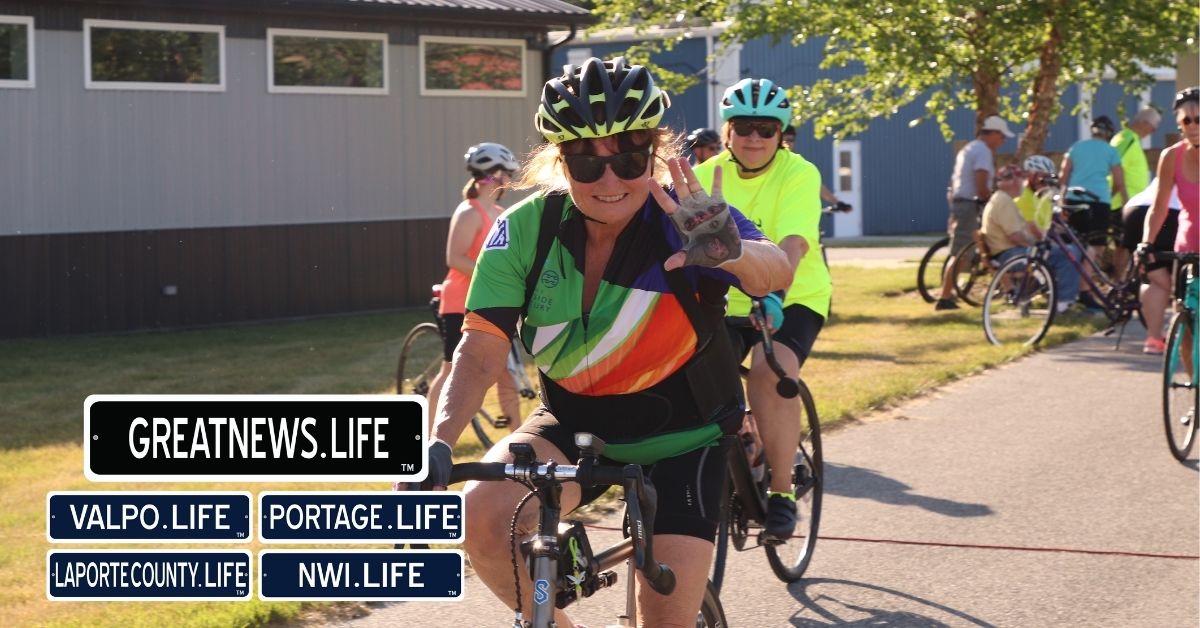 “At Thornhope, we have tables and chairs set up for people to take a break, get snacks and a drink, then turn around the head back to back to the starting point at Winamac. It's a 20-mile round trip,” said John Bawcum, president of Friends of the Panhandle Pathway, Inc. “The nice thing about this ride is if you don't want to ride the whole thing, you don't want to go 10 miles, the next town down is Star City. Star City is approximately five miles from Winamac, so that’s an abbreviated version. You get to pick and choose what you want to do. It's a nice evening ride.”

Regardless of the route, all participants ended their ride at Winamac Train Depot, gathering together to share a pulled pork sandwich meal from the Winamac Corner Deli and to share their experiences on the ride. With temperatures in the 70s, bright blue skies, and summer flowers in bloom, participants were in for a pleasant, mild ride.

"To me it was the perfect night," said participant Tom White. "A little windy but our group rides the Panhandle Pathway every Wednesday and love this route. We have done the Moonlight Over the Tippy ride every year they have it."

There are many new relationships formed from rides like this and use of the Panhandle Pathway.

"Jill and I met on a similar ride through friends of the Panhandle Pathway," said rider Michael Adair. "We started dating and will be married on July 1st."

Panhandle Pathway was formerly a Pennsylvania Railroad property that was converted into a non-motorized recreational trail stretching 22 miles starting in 2005-2006. At first, Friends of the Panhandle Pathway, Inc. focused its efforts mainly on the initial construction of the trail, but now it is focused on maintaining and extending the trail.

“We are working on what’s called ‘park-to-park,’” Bawcum said. “We're trying to extend the trail north towards Tippecanoe River State Park, which is approximately five miles north of Winamac, Indiana. On the south end, we're trying to extend the trail into France Park. When it's done, we're hoping that one could be in the one park, camp overnight, and then paddle or bike to the other end.”

If you would like to help Friends of the Panhandle Pathway, Inc. expand, you can make a private donation. You can also experience the trail by registering for Tippecanoe & Bicycles Too 2022, which is on Saturday, August 6.